Last week in Brussels, I received three women from Gaza, who are working in different sectors of UNRWA, the UN Agency for Palestinian Refugees. It was made possible with the support of the Rosa Luxemburg Foundation. Rada is a medical doctor, Siham works with the operations covering all the UNRWA programmes, and Siam is a teacher. Rebecca Dibb, the Gaza gender officer of UNRWA, was with them.

Since it is almost impossible for foreigners to enter Gaza because of the blockade, we wanted to bring a bit of Gaza to Brussels, with the support of the Rosa Luxemburg Foundation, in order to sensitize the European and Belgian political decision-makers as well as the European/Belgian public for the situation of the people of Gaza. The main message of our friends was: “Lift the blockade of Gaza. It does not hurt the Hamas, which is flourishing, but it is killing us, the civil population”. Their message was a strong expression of strength and dignity. 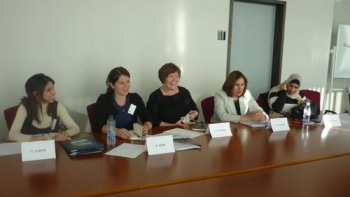