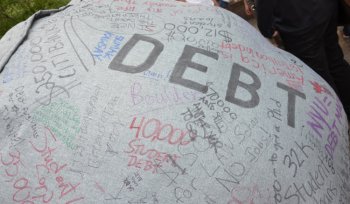 This paper considers the question of public debt and how it impacts upon other areas of socio-economic life in Poland, in the context of the recent global economic crisis. It begins by placing Poland’s public debt in its historical context that reaches back to the Communist period. One result of the large debt incurred during this time, was that Poland became indebted and dependent upon creditors in the West. This dependency helped to shape its neo-liberal economic policy from the late 1980s. This has resulted in a large deactivation of labour that has placed a huge burden on the country’s public finances. Furthermore, the creation of a compulsory private pension system at the end of the 1990s, sucked large amounts of money out of the government’s budget and swelled the country’s public debt. Since the outbreak of the economic crisis, Poland has avoided a recession through increasing public investment by utilising available EU funds. However, due to internal and external limits on the size of its public debt, the government is being pressured to reduce this spending that threatens to suppress growth and further increase unemployment. In order to create more fiscal room, the government has partly dismantled the compulsory private pension system, which has temporarily reduced public debt. Poland already has high levels of poverty and social exclusion, with large sections of society inadequately supported with social benefits and services. Any further reduction in public and social spending could have serious negative consequences for large sections of society.