The despotism of the border

The Conclusions of the European Council meeting on June 28, 2018 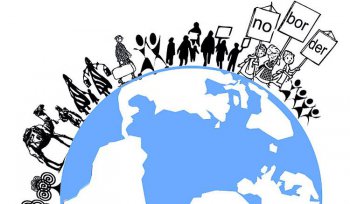 The trouble with migration policy, and by extension most border policy, is that it is always reactive, and never guided - or even inspired - by a positive vision for society. Nearly three years after the Summer of Migration, we might simply take account of what has occured since then, and conclude that the arrival of about one million people has neither threatened the social nor economic order in Europe and its societies of more than 500 million citizens. In longer retrospect, the Summer of Migration would then fade into the countless histories of migration and mobility that have shaped the European continent over the last centuries, and would only be detectable in distant and faint traces, like for example a certain prevalence of Huguenot surnames in Berlin.

However, this is not how migration policy, and the discourse around migration works. For even if the social and economic order of the European Union has indeed not been threatened by the migrations of 2015, the political order, and the political discourse, has been altered severly by the rise of right wing, nationalist, and openly racist positions. They exploit and abuse the issue of migration in order to roll back the achievements of the European project that a progressive, emancipatory European left can also identify with, and on which it could build a social, democratic and inclusive vision for Europe.

Since their inception through the Schengen agreements and their incorporation into the European Union treaties in Amsterdam 1997, the migration and border policies of the European Union have been guided by a securitised approach to migration, i.e. an approach that identifies migration foremost as a security risk and a threat. The newly invented European external border evolved into the instrument of choice to control, to regulate, to govern migration. In the course of this development, the border transformed from an imagined line separating Europe from the rest of the world to a political space of its own, spreading its mechanism towards countries of origin, intervening in countries of transit and in the immediate neighbourhood of the European Union, transforming the very external border with fortifications, increased surveillance, policing, and databases, finally encroaching on the interior of the territory of the European Union.

Already in 1993, at the advent of the Schengen system, the French philosopher Étienne Balibar predicted with prescience that "once [the borders] begin to constitute a grid ranging over the new social space, and cease simply to border it from the outside -- then the alternative lies between an authoritarian, and indeed violent, intensification of all forms of segregation, and a democratic radicalism which has as its aim to deconstruct the institution of the border".

The outcome of the European Council summit on June 28, 2018, certainly validates Balibar's diagnosis. Compared with the last European Council which discussed migration in October 2017, the conclusions indeed speak an intensified language of authoritarianism and carry an only thinly disguised appetite for violence. The conclusions start off by reconfirming that a "comprehensive approach to migration" is necessary, combining a "more effective control of the EU's external borders, increased external action and the internal aspects" (1.), and demonstrating its determination to "continue and reinforce this policy to prevent a return to the uncontrolled flows of 2015 and to further stem illegal migration on all existing and emerging routes" (2.). Gone are the usual references to international obligations for the protection of refugees, gone are the repeated statements of the imperative to save lives at sea, gone is the usual analysis of "mixed migration flows" that may contain refugees. Now there is only "illegal migration", and the conclusions only just stop short of literally declaring a war on it.

Their war on "illegal migration" will be fought on many fronts. Concerning the Aegean, the conclusions urge "additional efforts […] to fully implement the EU-Turkey-Statement" with the aim of bringing the "flows to a halt" and calls for stepping up return and readmission procedures. For the South-West of the European Union, the European council vows to support Spain and Morocco -- "financially and otherwise" -- to "prevent illegal migration" (4.).

Their war on "illegal migration" will be fought with mercenaries, as the European Council vows to step up support for the "Libyan Coastguard" and warns "all vessels operating in the Mediterranean", i.e. the activist and civil society ships that have over the last years prevented the loss of life which the European Union would tacitly condone, to "not obstruct operations of the Libyan Coastguard" (3.).

Their war on "illegal migration" will produce prisoners. Despite the current efforts of Italy and Malta to sabotage the life-saving operations in the Mediterranean, the European Council acknowledges that search and rescue operations will continue to take place. In order to prevent the arrival in the European Union of persons rescued, the conclusions propose "regional disembarkation platforms". They mean detention centres in the vicinity of the European Union, but do they really believe that such a technical term would somehow allow the European Union to circumvent the ban on pushbacks central to the Geneva Refugee Convention? For those that nevertheless are brought to the European Union, "controlled centres" are to be established in Member States, where "rapid and secure processing" would allow to distinguish between "irregular migrants" who would then face deportation, and "those in need of international protection", who should then be distributed within the European Union, but outside the Dublin system (6.).

Finally, the conclusions turn to the interior, charging that "secondary movements of asylum seekers between Member States risk jeopardising the integrity of the Common European Asylum System and the Schengen acquis" (11.). This twist is of course patently false, since Schengen and the Asylum System are clearly threatened by re-nationalised policies that blatantly ignore European Union legislation, or try to bend it to their will. It is only the last conclusion (12.) that implicitly acknowledges that the reform of the Common European Asylum System is currently at an impasse and that urges a reform of both the Dublin regulation, and the introduction of a new asylum procedures regulation that would enforce a faster and harsher asylum system for the European Union.

The new violent and authoritarian rhetoric of the conclusions are a dangerous result in itself and demonstrate to what extremes the European Council is ready to pursue the course embarked on over thirty years ago. But what is the likelihood that these new architectures of the European border and migration regime, i.e. detention and processing centres inside and outside the European Union, will actually be implemented?

All feasible countries in the immediate neighbourhood of the European Union have already refused to establish such centres, and even if one were to be financially persuaded, how durable and reliable would such a "cooperation" be? The precedent of the cooperation with Libya's Gadaffi and the constant volatility of the EU-Turkey-Deal do not suggest that such cooperations would be stable building blocks for a European migration policy, very much apart from the legal enclosures that the last such cooperations have effectively created.

As for detention and processing centres within the European Union, their prototypes have already been established through the "hotspot approach" proposed by the Commission in 2015. Currently, there are five such centres in Greece, and a similar number in Italy. These centres deliberately cause human misery. Especially in the Greek case they have created extralegal areas of jurisdiction where European Union agencies act without accountability, manufacturing deportable persons and eroding the last vestiges of an asylum system that would actually seek to protect persons in need of protection, instead of using its instruments to serially dispute such claims. The proliferation of such centres throughtout the European Union will only help to spread their violence further.

However, the real risk for the future of a Common European Asylum System, the Schengen Acquis, and indeed the European project, lies in the apparent willigness of the heads of governments and states assembled in the European Council to let the despotism of the border, of its "cooperation partners", and of the hotspot system to run wild. This will institute a political practice that is even more characterised by quick fixes, emergency measures, badly thought-out patches, and parallel mechanisms that will not lead to the emergence of a more stable system. It will not prevent any more "crises" from happening, rather: it lays the seed for the next escalation. This will then, to return to Balibar, only lead to further authoritarian and violent forms of racism disguised as migration policy.

The European Council is right when it states that the issue of migration can only be addressed on the European level, and not anymore by individual member states. It however fails to understand that migration is an integral constant of human life on this planet, and as such needs to be embraced and approached in a political manner that asks how the conditions of migration can be improved, and not eradicated. This is precisely the alternative that Balibar offers those of us who reject the authoritarianism and violence, the despotism of the border: a democratic radicalism which has as its aim to deconstruct the institution of the border. We are advised to hear his call now more than ever. Migration politics and policies in the European Union Migration - A message to Europe

Sans Papiers from Paris to the World Social Forum in Tunis