Jobs for the Climate! On 22nd of November, unionists and climate justice activists from ten countries and five continents gathered closely before the 4th International Ecosocialist Encounter in the “Lisbon Just Transition Gathering” to share experiences of their fights and to discuss possible convergence points between labor and ecological movements. The encounter took place in a highly contested and charged field of debate in which social and ecological questions are very often played off against each other—will we only save the climate on the cost of many jobs? Or will the need for jobs prevent us from getting out of the most polluting industries?

Furthermore, the debate was based on the fact that within the current capitalist system no significant energy transition is taking place at the moment that could come near to the 2ºC target of the Paris agreement. This is why the participants of the meeting well agreed that the actions and strategies of the union and climate movements cannot be defensive anymore, instead they necessarily have to be offensive. Here you find some voices and statements of some of the participants:

"Climate crisis is a class struggle"

Very many trade unionists were very clear about their role in these challenges. As Stefania Barca (University of Coimbra, Portugal) noted, labor is the relation between nature and society and therefore the labor movement is the key actor in solving the ecological crisis. “Climate crisis is a class struggle, it’s the capital versus everybody else”, she said. Jonathan Neale (One Million Climate Jobs campaign, UK) added that “in fact, unions have the true solutions not only to climate change but also for building massive social movements”. Josua Mata (SENTRO, Philippines) mentions that “unions need to explain to their members that we cannot win climate justice without system change. We as unionists need to use our membership power to build a climate justice movement and act on it globally”, he commented.

However, false solutions in the form of green capitalism or nationalist policies were rejected. Andreas Ytterstad (Bridge to the Future, Norway) alerts that “the markets cannot solve this problem, and that if we (the “everyone else” Barca mentioned) don’t take the lead, the capitalist system will co-opt this process with false solutions”. Brian Ashley (One Million Climate Jobs campaign, South Africa) added that “a worldwide, common strategy for climate and social justice is also the answer to the rise of the extreme right.” Daniel Angelim (TUCA, Brasil) stated that “cases like Bolsonaro help us focus on what unites the progressive movements, and also reflect upon what was not working in the previous progressive governments”.

So where did participants see attempts for change? Sean Sweeney (Trade Unions for Energy Democracy, USA) underlined the importance of public democratic control of the energy system and the economy. He stated that “we as agents being in charge of this transition, we need to get technical about the management of energy and make concrete operational proposals”. Ana Mourão (Climate Jobs campaign, Portugal) highlighted that we need a plan, a people’s plan for just transition, to make this social transformation happen. She explained in detail the climate jobs campaign in Portugal, how it united labor and climate movements and what this concrete policy proposal looks like. Many concrete examples were mentioned too: besides the climate jobs campaigns in many countries like the UK, the Basque country and Norway, participants were making reference to the anti-aviation struggles the anti-fracking campaigns and experiences of transport workers and campaigns for massive public transport.

"We need broad alliances of all social movements"

Samantha Mason (Public and Commercial Services Union, UK) said that just transition, like climate change, is the problem of all workers and not just energy sector workers. She highlighted that all unions should reflect and fight for just transition. Asbjørn Wahl (Norwegian Municipal and General Workers Union, Norway) added that the just transition and the fight for it should be based on the concrete conditions of the workers and should be designed by direct input from their experiences. “We need broad alliances of all social movements, because today we have to solve all the crises at once (economic, social, climate, food crises)”, he said.

Many other participants have discussed possible union interventions for climate justice. These can on the one hand happen through strikes for climate justice and active participation in the struggles against the fossil fuel industry. On the other hand interventions can also be translated more directly to workplace demands, such as the activities of the company (e.g. McDonald’s workers may demand wage raise and at the same time fight against the company’s environmental destruction), the workplace itself (e.g. supermarket workers may refuse to sell overly packaged products), or the production itself (e.g. car factory workers may demand producing buses instead of individual cars).

At the end of the day, participants agreed on the importance of the labor movement to fight for climate justice as well and that demands should be linked to visions of a general system change and for a just transition. For this reason, the unionists and climate activists wrote a declaration about COP24, that takes place in December in Poland. 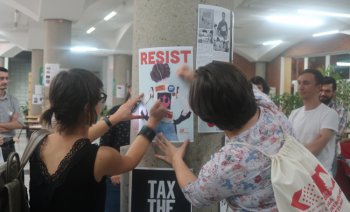 Organizing for a Left Hegemony Beautiful Green World. On the myths of a Green Economy