Since November 17th, in response to Macron's announcement of a tax increase on petrol and diesel, France has been experiencing mass blockades of road traffic. Macron wants to use this eco-tax to finance climate protection measures. According to media reports, almost 300,000 people participated in blockades on the first day of protest, and there have already been more than 2,000 protests throughout the country. In addition to several hundred injured, two people have already lost their lives. The following Saturday there were visibly fewer people on the streets, but the protests were much more violent and escalated on the Champs-Elysées in Paris. The demonstrators are always visible in yellow warning vests ("Gilets Jaunes"), which every motorist in France must have in their vehicle. According to their own statements, they defend the rights of motorists whom they see threatened by President Macron's climate policy.

Protest without a political home?

Militant clashes have a long tradition in France. Usually opposition parties, leftist movements or trade unions lead the resistance against government policy. But the "Gilets Jaunes" are breaking this pattern: they are "normal" citizens on the streets who have often not been politically active before. They are reminiscent of the "Bonnets Rouges" who in 2013 successfully protested for months against an ecotax. The "Gilets Jaunes" concentrate above all on forming local blockades, which also have an impact on economic life. Slowly, the roadblocks are turning into consumer blockades, and in many places retail shelves remain empty. The situation on the island of La Réunion in the Indian Ocean is particularly tense. The government there is responding with increasing repression.

The spontaneous protests were triggered by an online petition by 33-year-old Priscilla Ludosky and a video by 51-year-old Jacline Mouraud that has now been clicked over six million times. She called the eco-tax a "hunt against motorists" and deplored the way the government is dealing with diesel users, who are to be asked to pay for environmentally harmful vehicles. Mouraud is now regarded as one of the unofficial leaders and spokespersons of the "Gilets Jaunes", although they have no central organisation behind them.

The "Gilets Jaunes" organise themselves spontaneously, decentrally and via social media networks, a an ever more common phenomenon. Initial surveys showed that although many demonstrators are dependent on their cars, not all participants are. Most live in the countryside or in suburbs, are young and have rather low vocational qualifications. Many sympathise with the right-wing national party of Marine Le Pen (Rassemblement National). The conspiracy theories and racist outbursts spread by some demonstrators and a rejection of refugees fit in well with this. But left-wing leader Jean-Luc Mélenchon's sympathizers and, above all, many non-voters, are also among the protesters. Thus the "Gilets Jaunes" succeed in appearing as "normal" motorists and normal consumers standing up for their right to automobility.

On the contrary, polls show that they are aware of the climate crisis, would welcome a tax on air travel and reject glyphosate. But they should not have to bear the costs of environmental protection. It is also becoming increasingly clear that tax policy as a whole is perceived as unfair. It is about more than fuel prices, for many it is about a fundamental right of control.

From the protesters’ point of view, it is mainly ordinary workers and salaried employees who have to pay the most. The car, or the right to automobility, are therefore not decisive for participation in the protests - the "Gilets Jaunes" raise a deeply social question about an ecological problem.

From a left perspective, the following questions seem particularly important: Can there be a right to automobility in view of an impending traffic collapse in our cities and a worsening climate crisis? And: Who must ultimately be held responsible for reducing car traffic and bearing the costs of climate policy measures? How should the Left organise mobility in such a way that it is socially and ecologically compatible and attractive to broad sections of the population?

Macron's climate policy is only apparently ecological, but is above all anti-social

Macron defends the tax increase as a necessary part of a climate policy that will massively reduce car traffic. This fits in with his desired image as a climate pioneer. His goal is important and necessary in view of the advancing climate crisis and the limited progress made in reducing emissions. Since the beginning of international efforts to protect the climate, the transport sector has been the only area in which emissions in the Global North have either stagnated or even increased.

This is not surprising, since not only has the number of cars on European roads steadily increased, but the cars are also getting bigger and heavier. In Germany, every fifth newly registered vehicle is an SUV (Sport Utility Vehicle). These not only consume more fuel, but also cause climate-damaging gases and toxic air, which we all have to breathe. While some European cities are now beginning to ban diesel cars from inner cities, big leaps towards climate-neutral mobility are nowhere in sight.

Macron did not comment on the protests at first, but last Tuesday, during a state visit to Belgium, he announced that he was trying to "change habits" and stop the French from using fossil fuels, which was "never easy". This statement is just as true as it is false and full of mockery. It is true that our societies are dependent on fossil fuels for almost all areas of life and that this production and way of life is neither sustainable, nor is there any real alternative at present. More concretely: As we continue to burn fossil fuels, we are heading for an irreversible climate crisis threatening the livelihoods of millions of people. Radical political measures are thus needed, which, for example, must question the future of motorised private transport. It is also true that the car system is so deeply rooted in our societies that dependence on one's own car is sometimes compared to an addiction.

But a tax increase on petrol is not a suitable measure for this. People who are going out in the streets now feel compelled to use their cars, whether they like it or not. They must continue to drive, which is why tax increases are not really expected to result in less traffic or less fuel consumption and thus lower emissions. The hoped-for ecological gain is therefore more than doubtful anyway.

Dependence on the car system

But Macron's statement is also wrong, because you don't just put addicts on cold turkey without offering them support and alternatives. People in Europe, in most situations and places, depend on being able to move from place A to B. In particular, the increased demands of a more flexible labour market mean that getting to work can require ever longer commutes.

Although the number of daily journeys has not changed since the 1970s, the distances covered have doubled. People today have to be mobile or produce (car) traffic in order to participate in social life. This is especially true for all the more precariously employed who may travel long distances to reach their (several) jobs. It seems that not having to be on the move has become ever more of a social privilege. Young people from the urban middle class, who do not have their own car, are often mentioned here. But they live in privileged circumstances that allow them to live car-free. A single mother with three precarious jobs in the countryside cannot afford this freedom and is dependent on having – and using -- her own vehicle.

At the same time, alternatives to the car are often worse. Especially in rural areas, public transport is either not well developed or simply too expensive. In this respect, Macron's statement is also full of mockery, as his recent nationwide transport reform restricted or discontinued numerous train connections in the countryside. It is therefore not surprising that the protests of the "Gilets Jaunes" are particularly strong in rural regions and also rail against the arrogance of the presidency.

From a climate policy perspective it is necessary to massively reduce car traffic in Europe. But making fuel more expensive without building up alternatives at the same time is part of an anti-social regulatory policy affecting the wrong people. Macron's eco-tax hits those with the lowest incomes hardest. Anyone who already drives through Europe's well-paved inner cities in a 100,000 euro SUV today will not be nervous about the rising fuel costs at the end of the month, and he or she will continue to drive the car to the bakery. Dependence on the car is not an individually choice, but is deliberately political.

European transportation policies are usually not about making mobility possible for people, but about selling as many climate-damaging and resource-intensive products as possible. This is demonstrated by the interdependence of the automotive industry and politics and the numerous related indirect and direct tax benefits in European countries (company car privileges, commuter travel allowances, etc.). The transport crisis is thus exacerbated by numerous political mistakes favouring private ownership of a car with an internal combustion engine which thus support the fossil fuel industries in particular.

The climate crisis requires a real change in traffic patterns

The protests of the "Gilets Jaunes" reveal two things above all: First, the current lack of alternatives of the system Auto. If real climate protection is to be pursued in the transport sector, there must be a serious U-turn. The absolute reduction in car traffic that is necessary can only be achieved if real alternatives are developed and offered. This requires a massive expansion of public transportion, and a reduction in its cost, as well as the expansion of rail transport. In addition, it must be possible to design many paths especially for pedestrians and bicycle traffic. In cities such as Copenhagen and Amsterdam, where such policies have been implemented for years, their great impact is obvious.

Choosing cars must not be unattractive for financial reasons alone. It must simply no longer be politically desired and supported. This also includes making public space used for roads and parking spaces more expensive, and not just increasing the price of petrol. And this applies to electric mobility as well, which is often advertised as an environmental alternative. For as long as our societies are essentially dependent on fossil fuels, electric cars are only slightly more ecological - especially if the electricity they need comes from climate-damaging coal or dangerous nuclear power. In addition, electric cars do not solve many transport policy problems, but only intensify them. Especially when the electric car becomes a second or third vehicle, as is evident in Norway.

Secondly, the "Gilets Jaunes" also make it clear that real climate protection, which should not be at the expense of the lower income classes, will be anything but easy to implement.
A traffic turnaround will only succeed if the complexity of transport policy problems is taken into account and political measures are implemented that are both ecological and social. Ecologically necessary measures will otherwise be abused by right-wing populists and play into their hands.

It is precisely the deep conviction of being affected by unjust and elitist policies from "top-down" policies that fits the world view of the French right-wing extremists, who therefore use the protest of the "Gilets Jaunes" for their own inhumane purposes. Macron obviously underestimated this as much as the potential for resistance from those who depend on the car today. But only with a genuine social-ecological turnaround will we overcome the climate-damaging system of automobility without leaving this field to the right-wing populists. 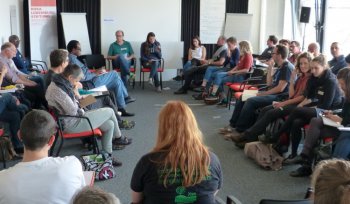 Time to go beyond gas!