The feminist strike in Spain 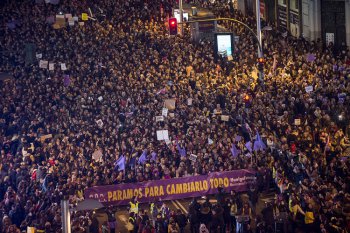 claims to fight against a “patriarchal and capitalist, racist and heteronormative society”

On 8 March 2019 the second feminist strike in the Spanish history is called, after the success of the 2018 one. Like the previous year the strike will be covering labour, students, consumption and care.

The organization of the strike, the 8M commission, a compendium of the feminist movement in Spain, decided after several evaluation events to call for the feminist strike on 2019 too, and follow up with the same topics or axes. The overarching idea is to claim that if women stop (not only at labor level) the world stops.

Precariousness, accumulation of care work, double discrimination are of course on the focus. The movement recognizes the international dimension of this initiative that inspired the organizers and they claim for an intersectional feminism including those claims of women in the global south. More concretely, the violence on women, bodies, borders and economy are the thematic axes around which the movement states in a 23 page document a set of demands and proposes alternatives from a feminist point of view.

We are here to change it all

In this regard, it is remarkable for example that the violence against women is treated as a holistic phenomenon that affects many facets, from marketing to rape, from cyber bullying to detention centers, from the judicial system to education.

Regarding “bodies”, the sexual and reproductive rights and the abortion out of the Penal Code are key. But the demands to not end there: taking the women’s bodies as autonomous spaces out the Catholic Church, the institutions and the economic powers, claiming for LGTB+ rights, migrants’ right to health, or taking the health from a holistic point of view socially and institutionally are just some examples of this.

In “borders”, the movement states that the of class, gender, gender identity, origin are binarisims that the racist and capitalist system enhance, and therefore the feminist movement proposes a intersectional struggle. Meaning by these that all these features are interwoven in the real oppression that women live and all of them should be combated jointly. In particular, the closure of borders and how they are managed by the institutional apparatus, place women and children in particular vulnerability and the organizers propose to close the internment centers, finishing the deportations, etc.. In this intersectional frame that the claims stand at, there is a huge push for connecting the feminist and racial struggles.

Finally, in the economical axe, the diagnosis is that patriarchy and capitalism go against the main objective of the economy which is to put the life in the center so good lives can be lived all around the globe by accessing the resources in an equalitarian and environmental sustainability. Women of course live with the burden of care work which sums up to all the austerity measures impacts (see this study by RLS in this regard) which leads to a precarious approach to the labour market, impoverishing women and making it really hard to engage in maternity experiences. In order to counter these dynamics, the organizers propose to make visible the care work and share it between men, women, communities and state, care workers to have labour rights, increase of public services, against pay-gap, equal and not trasferable m/paternity leaves, re-valuing of works for the common good; to create a model that is not based on women’s bodies and environmental exploitation in sum.

Some weeks ago a festival to warm up the strike took place in Madrid and 4.000 people attended, double than last year. Before that, the campaign #1000Motivos (1000 reasons) was launched to start disseminating the strike claims.

Once again, even though the Madrid demonstration is expected to be the largest, one of the main features this strike call has is that it is decentralized: every town, village and neighborhood is called to self-organize their activities. Click here to see the mapping of the activities planned for the strike.

During the last week many pre-strike events have taken place all around Spain around the four thematic axes. For example, a demonstration in front of the detention center in Madrid claiming its closure, a marathon claiming the right to feel safe in the public space, a performance on alternative consumption and production, theaters, talks, presentation of books. Also an official video has been launched.

All this to prepare for yet another historical day in Spain, 8 March 2019, when care centers will be opened in civic centers, squatted buildings, associations and unions so men take care of children, food and overall organization of care work while women strike. In most part of the cities the strike will begin with pickets, then decentralized activities (demonstrations, reading the manifesto etc.), then having lunch in the care centers and then going to the demonstrations, mostly called in the evening. Some other women will go to work and follow the 2 hours stoppages called by the majoritarian unions. And for those who cannot leave the ones whom they take care of alone they are asked to symbolically put their aprons upside down in their balconies.