Connecting struggles between North and South Climate change is rising as a global threat for the environment with already devastating effects on the most vulnerable populations at the national and international scale. It is now understood that only a drastic change in energy policies combined with a systemic climate action globally can mitigate those disastrous environmental and social effects. At the same time the gas industry, extracting and transporting an extremely harmful fossil fuel for the climate and communities, is pushing for more infrastructures in Europe as well as developing plans and projects all over the world, often under the misleading promise that gas is a bridge toward green energies.

As a response, the Rosa-Luxemburg-Stiftung, Brussels Office, together with a group of environmental NGOs is organizing the 3rd edition of the Beyond Gas conference: Connecting struggles between North and South. On the 22nd and 23rd of March more than 50 front activists and NGO campaigners from all over the planet will gather and collectively reflect on the commonalities of the resistance against gas in different regions, exchanging knowledge and visions. Naomi Kreitman from the Gastivists Collective wrote a report on the outcomes of the conference. It becomes clear that the activists have taken many significant steps forward. 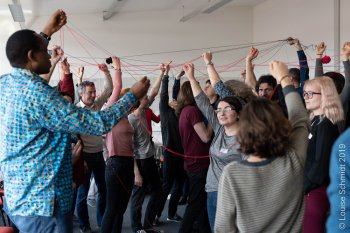