What’s Left of the past? Revisiting ideas for an emancipatory and united Europe

Report on the panel debate at the Rosa-Luxemburg-Stiftung 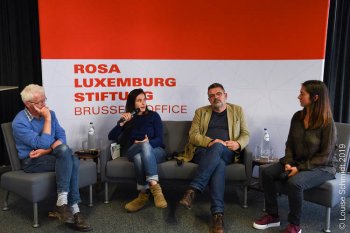 If you could rearrange the permanent exhibition of the House of European history, what would you do?

Display the magnitude of European colonialism and imperialism far beyond the first half of the 19th century. Put greater emphasis on the significant contributions by citizens’ movements to the development of the European Union. Rather relate to anti-fascist struggles across Europe instead of comparing Nazi Germany and the Stalinist Soviet Union under the dubious concept of totalitarianism.

These were some of the points raised by the three panellists Willy Buschak, Jana Tsoneva and Stefan Troebst during the night of the 10th September. Taking the presentation of European history in the House of European history as a point of departure, the panel debate aimed at discussing events and emancipatory movements that receive little attention in dominant narratives on recent European history. Dr Dagmar Enkelmann, Chair of the Executive Board of the Rosa-Luxemburg-Stiftung, emphasised in her welcoming speech how important it is for the Left to understand its own roots, which are based on transnational thinking and acting, in order to overcome boundaries.

“Through the critical discussion of European history you realise that Europe is not something enforced upon us, but a request by us, by trade unions, socialist parties and social movements.” Willy Buschak

Listening to the debate, past citizens’ movements remind us that a united Europe has been a core demand of the organised working class for almost a century to which we can easily relate to today. More so, European history is not solely shaped by governments of nation states, but to a great extent by popular, transnational movements and their demands for a united, democratic and social Europe. If that is the case, we, as social movements, have the power to build and to change Europe. The attempts of transnational collaboration by civil rights movements in Poland, the GDR and Czechoslovakia in the 1970s and 1980s remind us that pursuing this course has value no matter how challenging the circumstances.

“It is impossible to understand far right violence without going back to Europe’s colonial and imperial history.” Jana Tsoneva

While examining European history can inspire our struggles today, revealing the complexity of our common past is a cornerstone in countering racism and the far right in Europe today. The exchanges made clear that debating our understanding of European history helps us to effectively and profoundly deconstruct the picture of a white and Christian Europe painted by far right forces across Europe. Following the panel debate, we know that we are not doomed to solely react to a destructive narrative, but that we can root our ideas and visions of an emancipatory and united Europe in the history of European movements and struggles.

“Ideally, a critical discussion on European history functions as a sort of anti-dote to the rise of populism.” Stefan Troebst

Please find the pictures of the event here.

If you have any queries, please contact our project manager Axel Ruppert: axel.ruppert(at)rosalux(dot)org