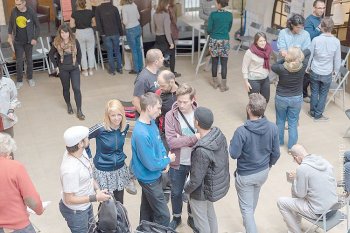 The Office of the Rosa-Luxemburg-Stiftung in Brussels invited almost 80 activists from nearly 20 European countries to a conference titled «Urban Movement! Connecting Resistance and Alternatives». The conference ran from 18 to 20 October 2019 and gave the participants an opportunity to discuss the transport revolution from a grassroots perspective, exchange views and ideas and learn from one another. The various groups and initiatives came to Brussels equipped with a huge variety of campaigns and strategies, some of them geared towards improving infrastructure and boosting the rights of pedestrians and cyclists, others designed to fight for better, cheaper or even free public transport, or to turn urban spaces, especially streets and car parks, into usable shared spaces for use by everyone. Some of these activists voice their views in petitions or demonstrations, others occupy public spaces to engage in direct action and/or stage public artistic events.

Different though the activists' strategies or priority issues are, they all share the same goal: making our towns and cities more liveable by offering fair, environmentally friendly transport for all and reducing, if not totally eliminating, car traffic. What clearly emerges from all these initiatives is that aspiring to better towns and cities entails a social and ecological struggle that invokes deeper conflicts about (global) justice in our societies, raising questions like: Who actually owns towns and cities? And who takes up how much space? Who moves by what means and for what reasons? How can mobility and transport be organised in the face of the climate crisis and increasing urbanisation? Who will pay for the externalised costs of our transport system? What kind of power do (automotive) groups have, and who actually determines how we (can) move about and where we meet each other?

The conference kicked off on Friday evening with a brief presentation of the participating groups at the poster exhibition and then continued with a panel debate on different approaches to change in our towns and cities. Allan Alaküla presented the concept implemented in Tallinn, which for several years now has offered totally free public transport. Isabell Eberlein spoke about the success of the referendum on bicycles in Berlin and the limits grassroots activists face when dealing with municipal authorities. Geert van Waeg talked about the perspective of pedestrians, the least visible group of road users, to which we all belong at some time. Laura Schwarz spoke about direct traffic-related actions like the Munich-based initiative Ende Geländewagen (Stop SUVs) or the Frankfurt-based pro-climate, anti-car action group Sand im Getriebe (Grit in the Gears). The debate was chaired by Janna Aljets, the initiator and organiser of RLS Brussels' conference. 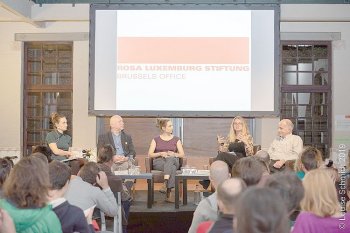 On Saturday morning, the keynote speech delivered by Anna Nygard from the Swedish collective Planka Nu (Fare Evasion Now) set the tone for the day's proceedings. Via Skype, she reported on two decades of experience as an activist advocating free transport, establishing a clear link between local transport policy and issues of social justice and the capitalist economic system. She clearly underlined the fact that mobility and traffic are part of a larger power system that needs to be broken and changed.

On Sunday morning, two further keynote speeches sparked further discussions. First, Pilar Vega from the Spanish collective Ecologistas en Acción presented a strong feminist perspective on transport planning and urban design, showing how strongly the male gaze and patriarchal structures shape the way we move around our towns and cities. Next, Ana Gulías Torreiro from Pontevedra in Spain reported on the achievements of a car-free city. She, too, was able to demonstrate from her own practical experience just how repressive a car-oriented town or city is, particularly for socially marginalised groups, and how lowering the number of cars can strengthen alle the people.

Last but not least, the conference was shaped by the participants themselves. Various groups and campaigns that had teamed up in advance led joint workshops on a very wide range of topics, including "Cycling in the City: Stories of Space and Power, Experimental Approaches for Liveable Public Spaces" and "How to Deal with Demagogy and Greenwashing". The participants exchanged their views and experiences and discussed how our towns and cities can be made more liveable and which political strategies can be pursued to this end. These workshops enabled the participants to share their own experiences, but also gave them fresh sources of inspiration for their own work back home, stimulated cooperation and collaboration and enabled the participants to build new alliances.

For the full conference program and a short introduction to all the groups who attended it, see the Conference Reader, In addition, many groups brought along a poster to present what they do. These posters can be found here.

Exploring the city on foot and getting active together

Last, but not least, the conference also served to inspire the participants to take action together. Saturday afternoon, the participants took to the streets in four separate groups to explore the city. They were introduced to different parts of Brussels and informed about transport and mobility issues by local activists offering them special insights. How did the city grow historically? How was its infrastructure planned? Which social tensions arose as a result?

On Saturday evening, the participants exchanged ideas in the open space and watched the film “Bikes vs Cars”. Another part of the group spontaneously decided to take direct action in Brussels, blocking a major intersection in Saint Gilles and offering drivers an alcohol-free aperitif. In a simple and good-humoured way, the activists brought up the question how space is allocated in the city and incited discussions among and with neighbours and residents. A video of the action was made by Kollektiv Raumstation.

«There are so many of us» 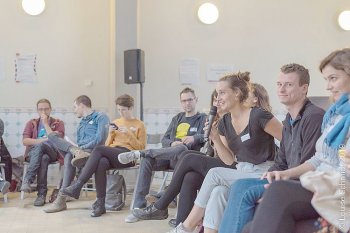 Of course, much of the usual work done by the activists and conference participants is limited to their immediate local area, where they fight in their towns and cities, mostly unpaid, for a more liveable, quieter, greener and fairer urban environment for all. Precisely for this reason, they often lack the time and space for international networking. However, at the same time there lurks a danger that activists involved in local grassroots work might become bogged down by details, lose sight of the big picture or find themselves up against such strong resistance that they end up feeling demotivated.

However, a true transport revolution will take a lot of time to bring about and require large numbers of people who believe in the vision of a better urban environment. This was the main idea for RLS Brussels' “Urban Movement! Connecting Resistance and Alternatives” conference, which sought to bring activists together, inspire them and provide them in the long run with a long-term network so that they stay in touch and learn from each other. After all, as diverse as the activists' problems and strategies might seem at first glance, they all share a vision of bringing about more liveable, fairer (car-free!) cities. For this reason, the conference will be repeated at regular intervals, henceforth hosted by different European cities, backed and organised even more by the network of activists and supported by RLS Brussels.

For questions about the network, please e-mail the project manager, Janna Aljets, at janna.aljets(at)rosalux(dot)org or call her on +32 (0)2 738 7661.

Quotes from the participants

“Opportunity to meet, talk and listen to all the people interested in the same topics as me. Debate was incredible and some of the speakers were more than inspiring! Whole organisation was on a such great level!“

“I learned what other grassroots are doing in their respected communities and I got a lot of advice on how to implement some actions from others in our own community. I learned the differences between our communities, but also what makes us closer and together in this – and this is enthusiasm to make changes – we are all on the same wheels of change.“

“Wider perspective of urban mobility, a lot of useful ideas and great feeling that this what we are fighting for is worthwhile!“