Assessing GND proposals: are we facing transformative and just programs? 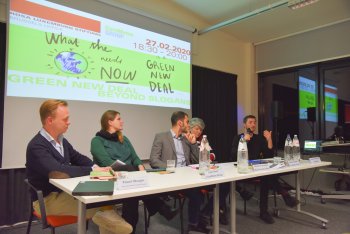 The panelists made clear that the current European Commission proposal for a European Green Deal (EDG) is stuck in the austerity dogma with overemphasized private sector contributions. While public investment will be crucial in achieving meaningful results, the Commission’s commitment to the Stability and Growth Pact will severely limit the impact of its proposed ‘man on the moon project’. In terms of climate actions, the measures contained in the Commission proposal are tied to market based solutions that have already showed their limits and inefficiencies. The continuous push for Free Trade agreements as well as a blind spot on the common agricultural policy demonstrate clear contradictions with the displayed environmental and social goals of the deal.

What is needed instead is a major public investment programme. Financing proposals include a new multi-stakeholder governance model for the European Investment Bank that allow using its funds beyond the public-private-partnership logic, a clarified mandate for the European Central Bank to focus on social progress and environmental protection, drawing on Eurobonds and an EU-wide tax on corporations. At the same time, private financing cannot be dismissed as a whole, but its involvement must be regulated, monitored and supervised. 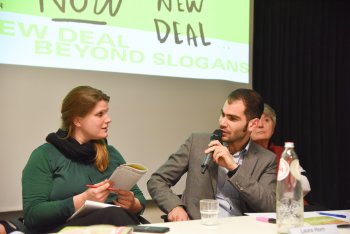 In terms of social policy, the EGD does so far provide no systematic mainstreaming of social policies. Contributions from the panel clarified that there are ample opportunities to apply measures for social justice in line with the policy fields of mobility, employment, energy security and energy poverty. To do so and address poverty in Europe and the crises of public welfare systems across the EU, a meaningful proposal for a Green Deal or a Green New Deal has to place public ownership and the running of sustainable public services at its core. Closely connected to the question of public ownership is the question of democratic and inclusive decision-making. To eventually avoid a ‘de-carbonisation without democracy’, detailed decisions about the allocation of resources at national and local level should be taken by democratically accountable bodies at the corresponding level. 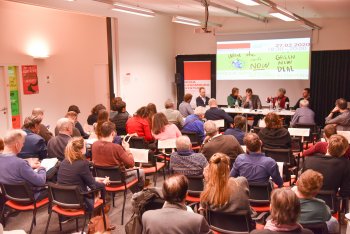 One clear critic that emerged from the discussions is the clear limit posed by the logic of the European Green Deal in terms of global justice. With no account of balance mechanisms toward external countries, there is no evidence of any sort of possibility to build on more international solidarity with the current plan.

Finally, one central question remains after this evening. Progressive forces have to come to terms on how to deal with the fact that any sufficient implementation of a European Green Deal or a Green New Deal will need deeper political integration at EU level. To what extent and in which form do we as progressive forces want and can shape that?