Islands of reaction: the far-right and France’s local elections 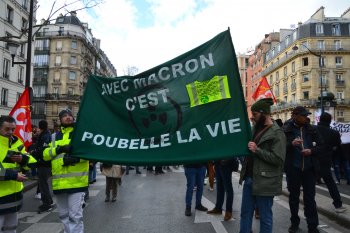 I have swallowed a monstrous dose of poison.

France’s forthcoming municipal elections mark the opening of a cycle that ends with presidential and parliamentary contests in 2022, following next year’s departmental and regional elections. Half a million local councillors in around 35,000 constituencies are going to be elected on 15 and 22 March, a major test of party organisation and local roots. Local success can provide a platform for smaller, newer or outsider parties to demonstrate what they can do when given a taste of power. This has been the case in 14 towns that fell to the far-right last time round, in 2014.[1]

The elections take place in a fraught political atmosphere. Emmanuel Macron’s La République en Marche (LREM) party appears on the verge of driving through highly contested pension reforms in the face of significant opposition from the trade union movement, whose strikes and protests have been met with an uncompromising response.

Macron is seeking to impose a neoliberal model that has never achieved majority backing in France.[2] Feeding off support drained from the Socialists and the post-Gaullist right, he was elected president in 2017 because he was not Marine Le Pen. What sustains his political project for now is the lack of a coherent political alternative to neoliberalism, one that goes beyond resistance, however powerful, to ‘reform’.[3] The imprint of the yellow vest revolt, that swept France from November 2018, and the movement against pension reform can be found in the united left ‘citizens lists’ that have cropped up in some areas, but for the moment there is no widespread electoral dynamic giving political shape to the social movement.

Despite enjoying a parliamentary majority, the LREM government has chosen to railroad its pension reforms through the National Assembly by decree. How, asked an editorial in Le Monde, could a measure once presented as progressive have become a ‘pure act of authority’?[4] Macronism’s authoritarian aspect was highlighted in 2019 by the United Nations High Commissioner for Human Rights, who announced an international investigation into the use of excessive police violence against protesters. France was the only advanced economy to be listed in the report, its repression of the yellow vest movement earning it a place alongside Sudan, Zimbabwe and Haiti.[5]

Meanwhile, Macron has consistently dragged public debate onto the terrain of the far right. In February 2020, he set off for eastern France, to the Bourtzwiller district of Mulhouse, a neighbourhood with a significant Muslim population that had already been denigrated in quasi-colonial terms by interior minister Christophe Castaner as one of 47 areas that the Republic needed to ‘reconquer’. Macron adopted a similar vernacular in a high-profile invention targeting the ‘Islamist hydra’ and the problem of ‘Islamist separatism’. The message was clear: France has an enemy within, located not in the racist and fascist currents of the far-right but among its Muslim population.

Perhaps unsurprisingly, LREM has not had a good election campaign. Defections have produced rival election slates and a sex scandal led to the resignation of its candidate in Paris. Its chances of significant visibility in these elections are probably limited to Lyon, its best hope of big city success.

Like LREM, Marine Le Pen’s Rassemblement National (RN, formerly Front National or FN), also pursues a hegemonic political project but is far from a dominant force at local level. The party, which has lost up to a third of its councillors since 2014, is contesting fewer seats this time round, building on the roots and legitimacy it has already established at local level in preparation for the next stages of the electoral cycle. [6] The RN controls a cluster of small towns in the south and has achieved limited success in some eastern and northern areas, notably in Henin-Beaumont, where Steeve Briois became mayor in 2014 and Marine Le Pen parliamentary deputy in 2017. While the RN hopes to build on its base in the north of Marseille, it is unlikely to win control of a major city. Perpignan, in southern France, with a population of 120,000, is probably the biggest town where it has a realistic chance of success.

In nearby Béziers, France’s most high-profile far-right mayor, Robert Ménard, elected on an independent slate with support from the FN in 2014, looks set for a second term, with one poll showing him on course for a 61% score in the first-round ballot on 15 March.[7] Since 2014 the RN has been anxious to avoid the negative publicity that followed its local election victories in the 1990s, eager to emphasise its responsible, managerial capacities and to avoid ‘making waves’. These constraints do not apply to Ménard, however, since he is not a party member.[8]

His preoccupations nevertheless naturally overlap with those of the RN: authoritarianism, racism and a desire to ‘clean up’ whichever town, city or region is at issue. A former Trotskyist who founded ‘Reporters without Borders’ in the 1980s, Ménard gave an insight into what makes him tick in a video produced for the town hall’s YouTube channel.[9] The film, entitled ‘You’re Not Welcome Here’, shows Ménard arriving at the La Devèze estate on the outskirts of Béziers flanked by armed police. He is then seen standing in his suit and mayoral tricolour sash next to an English interpreter in a flat occupied by a refugee from Syria. Ménard harangues the man: ‘You’re not welcome in this town. You have broken the door to get in. You are stealing water and electricity. You can’t stay in this flat. I repeat, you are not welcome in my town.’

As mayor he had no authority to command those in the building to leave, but that was not the point. Emulating the antics of the Northern League’s Matteo Salvini in Italy, the stunt revealed Ménard as a narcissistic bully playing out a racist fantasy.[10]

The number of CCTV cameras in Béziers is set to double. Ménard has trebled the number of police in the town, and they have been armed. One poster he commissioned displayed a 7.65mm revolver with the caption, ‘Now the local police have a new friend’. More symbolic measures also carried menace, implied or explicit, towards residents of North African background. A street commemorating the date of the ceasefire that ended the Algerian war of independence, 19 March 1962, was renamed after Commandant Hélie Denoix de Saint-Marc, a former resistance fighter and Foreign Legion soldier who achieved notoriety for his role in the operations overseen by General Massu in Algiers that involved torture and summary executions. He later joined the terrorist anti-independence force, the Secret Army Organisation (Organisation Armée Secrète, or OAS) and took part in the attempted putsch against De Gaulle in 1961.[11]

Ménard has repeatedly attempted to set up a Christmas nativity scene in the town hall. Although ‘official’ Republican secularism, or laïcité, claims a theoretical neutrality for state actors in matters of religion, the far-right’s appropriation of the issue is based on hostility to Islam as a ‘foreign’ influence and promotion of Catholicism as an integral part of French tradition and culture. A year after Ménard’s election he announced that Béziers’ annual bullfighting festival, the Féria, would open with a Catholic mass, publicising the service with posters produced by the town hall. Here, as radical left politician Alexis Corbière noted, the point of Ménard’s interpretation of laïcité was simply to humiliate the local Muslim population.[12]

This desire to humiliate has been a systematic feature of Ménard’s administration. Upon winning office he claimed that 64.6% of pupils in Béziers schools were Muslim. Since ethnic monitoring is not carried out in France, the suspicion was that his ‘official’ figures were based on extrapolations deducted from pupils’ names. Later he claimed that a class in the town centre with a ‘91% Muslim’ intake was evidence of the ‘great replacement’, the racist conspiracy theory advanced by Renauld Dély and cited as inspiration for the Pittsburgh, Christchurch and El Paso shootings in 2018-19.[13]

Ménard’s promise to ensure that no more kebab outlets were opened in Béziers, and his banning of shisha pipes in public during summertime, were of a piece with the petty vindictiveness deployed in other far-right towns like Beaucaire, near Avignon, where FN/RN mayor Julien Sanchez, picking up on a motif symptomatic of the ‘new secularist’ agenda, trumpeted his ban on alternatives to pork on school dinner menus with the puerile assertion that he would not be party to the ‘great replacement of pork in the cafeteria’.[14] Not only would there be no substitute for pork, a decision that left a quarter of Beaucaire school children without an alternative choice, but pork would be served every Monday. After all, Sanchez remarked, one only had to read Asterix to know that, ‘In France, in Gaul, we’ve always eaten wild boar’.[15] Laïcité has proven a very useful tool for the RN, able to impose anti-Muslim bigotry by asserting the primacy of ‘French’ customs and heritage, all under the guise of Republican secular ‘neutrality’.

Jumping on the new secularist bandwagon has helped the FN/RN to make inroads into other southern towns. In Perpignan, former FN vice-president Louis Aliot claims that the RN line on laïcité and immigration has gained it an audience that did not exist 15 years ago, citing the party’s reception in the town’s masonic lodges as an example.[16] Aliot is running for mayor but not under the RN banner, having temporarily ‘withdrawn’ from the party in an attempt to seize on the disorientation of the post-Gaullist right in areas where Les Républicains members find themselves torn between running their own lists, backing Macron or supporting the far-right. East of Perpignan in the small town of Lunel, seven members of Les Républicains, around a tenth of the local federation, have switched to join the RN slate.[17]

Nearby Sète offers a further example of shifting terrain on the radicalising right. Sébastien Pacull, until November 2019 the president of the Les Républicains federation in the Hérault department, is being backed by the RN as an independent candidate at the head of a ‘union of the rights’ list. For Marine Le Pen, such alliances are an indication of ‘how our party wants to function in the years to come’.[18]

Prospects for the Rassemblement National beyond these elections will depend to some extent on whether the left can translate resistance to a neoliberal economic project into an alternative able to take on the authoritarianism and racism that are giving succour to the far-right.

This is not simply an electoral question. The RN is not expecting large-scale, sweeping victories in these elections. It is playing a longer game. Marion Maréchal, a leading far-right figure and ally of Ménard who since 2017 has withdrawn from front-line RN activities (and dropped Le Pen from her surname), spoke at a ‘Convention of the Right’ in October 2019, urging participants to read Gramsci and take note of the question of ‘cultural hegemony’. ‘I believe that the great political shift that we aspire to here will come about… through the multiplication of little islands of resistance at the heart of civil society,’ she told her audience. ‘Let’s not wait for a future institutional victory to take our responsibilities and commit ourselves. This victory will come, of course, but only if we have prepared it, and that requires a lot of time and a lot of method.’[19]

Unchallenged, the islands of reaction built by the far-right at local level represent important stepping stones for the RN as it prepares for future institutional battles.

Jim Wolfreys lectures at King’s College London. He is author of “Republic of Islamophobia. The Rise of Respectable Racism in France” (Hurst/OUP, 2018) and co-author (with Peter Fysh) of “The Politics of Racism in France” (Palgrave, 2003).

[9] The video can be viewed here: www.dailymotion.com/video/x36vjfk.