"An outright subversion of democracy"

Commentary by the CGT on the use of Article 49-3 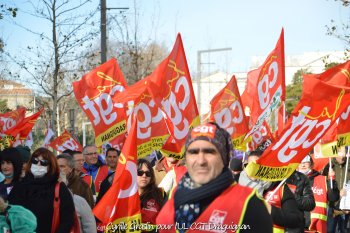 By Catherine Perret, Confederal Secretary of the French General Confederation of Labour (CGT) and author of our recent article describing the proposed reforms: An attack on the solidarity-based system.

Because of the Coronavirus, the pension reform has been temporarily suspended. However, there is no doubt that it will be one of the first measures brought to the table once the situation in France has been stabilised.

At a meeting of its Council of Ministers to discuss preventive measures for tackling the coronavirus, the French government – which finds itself mired in a pension reform that is supported by only a minority of both public opinion and cross-industry trade unions – wielded Article 49-3, effectively depriving the National Assembly of the opportunity to debate and vote on the bill.

Not only is the deployment of Article 49-3 an outright subversion of democracy, but the method used reveals the level of the government's contempt for Parliament and any form of debate.

The CGT submitted concrete and appropriately substantiated proposals on pension reform with a view to improving the current system.

We demonstrated there that the French pension system is underfunded due to wage stagnation, mass unemployment and a huge increase in employer exemptions. We also made perfectly tenable funding proposals totalling around €80 billion, enabling major progress for retirement at the age of 60 and early retirement at least five years before that for all workers employed in particularly arduous jobs.

Moving the retirement age back to 60 would cost around €27 billion, but given the large number of senior workers receiving unemployment benefits, this measure already yielded €12 billion in savings from unemployment-benefit funds going towards pensions

At the same time, implementing equal pay for women and men would bring in around €6.5 billion for pensions. Applying social security contributions to all forms of remuneration (bonuses, profit-sharing, employee savings schemes) would add €10 billion to that. And remember that tax evasion in France means that at least €90 billion per year escapes taxes and social security contributions.

So we can see that this is not a financial issue but rather the product of a liberal ideology that seeks to make people work longer and, above all, to lower pensions in order to open up the market to private insurance schemes.

In light of such contempt for democracy, the CGT calls for a response – and will continue to do so – because nothing has yet been decided; it is now up to the Senate to start the parliamentary debate in late April or early May, after which the bill will return to the National Assembly in June.

This is why the majority-opinion trade union organisations opposed to the reform have organised their own “Financing Conference” to even more massively publicise other possible solutions for improving pension benefits in our social security-based system. This is why the CGT, together with the national trade unions, is in the process of organising a major mobilisation to further increase the number of strikers across all industries.

This regressive reform must not be allowed to see the light of day. We want a different society and we will keep going until the government's pension reform bill is withdrawn.

Catherine Perret is Confederal Secretary of France's General Confederation of Labour and a CGT negotiator on pension reform. She is also a member of the Board of Directors of the National Agency for Adult Vocational Training. Her article An attack on the solidarity-based system was published in A Season in Hell in November 2019.