German obstinacy and the end of the European Union

In light of the coronavirus crisis and the expected economic consequences, a number of European countries (including those most severely affected at the time of writing) have again called for the introduction of Eurobonds. Of course, this time they are going by the name 'coronabonds', but the idea and intended effect are the same. The aim is to raise capital, through issuing common European sovereign bonds, that will then help crisis-hit countries to stabilise their economies or get them back on their feet. Furthermore, unlike national sovereign bonds, these bonds are affordable and do not adversely affect individual countries' capital-market ratings. They would have been an excellent tool in the days of the banking/euro crisis and should be very much welcomed and widely embraced in the current crisis. However, they have run into difficulties because of the attitude of countries that have stuck to the long-failed doctrines of neoliberalism and especially because of Germany's adherence to austerity and the balanced budgets ('black zero') dogma. The Netherlands, Austria and of course Germany have flatly rejected the proposal put forward by countries to their south and west. This was a fatal mistake in two ways.

While these governments' rejection of the bonds maybe came as no surprise, the speed and abruptness with which it was delivered did raise eyebrows. The idea of issuing such bonds was mooted by nine governments, spearheaded by France and Spain and in particular Italian Prime Minister Giuseppe Conte. Now, following the opposition to the bonds and the resulting vigorous protests from Rome, Paris and Madrid, a compromise is in the air. Instead of Eurobonds or coronabonds, aid is to be provided in the form of loans from the European Stability Mechanism (ESM) to Member States in need. This is not even remotely the same and is in no way an appropriate compromise. While the coronabonds proposal was an attempt at a joint European Union response to the crisis, loans would lead to even more debts being accumulated by Member States, especially countries that have not yet fully recovered from the financial crisis. We do not even know whether the euro will survive the global economic crisis arising from the current health crisis. ESM loans would only heighten the risk of the euro's demise.

The rejection of the bonds is a serious error because it also damages the very interests of the countries opposing them. It is conceivable that certain European countries will soon face a situation similar to Greece during the financial crisis. Even before the coronavirus crisis, Italy was considered to be at risk in this regard. In other words, the coronavirus could destroy the euro. In Germany, the economic 'bazooka' policy launched by Federal Minister of Finance Olaf Scholz has seen all conventional orthodoxy cast aside. The coronavirus crisis has seen the 'black zero' abandoned, nationalisations being considered and huge sums of money being pumped into the economy. This response is entirely appropriate, as it serves to keep the economy alive and mitigate the upcoming recession as much as possible. However, it does raise the following question: if such measures are deemed appropriate and essential at German level, why shouldn't they be viewed as such at EU level too? National measures will not be enough to counter a global economic crisis with Europe as an epicentre. German Chancellor Angela Merkel's government has evidently been very poorly advised in this case. This situation gives rise to various possible scenarios, including the prospect of a substantial number of European countries issuing common bonds without first securing the approval of Germany or Austria. Of course, it is not only conceivable but likely that countries hit particularly hard by the crisis, such as Italy, will be neither willing nor able to return to the constraints of the Stability and Growth Pact in the foreseeable future. All this means there are huge question marks over whether monetary union can survive the global economic crisis.

However, the rejection of coronabonds is also a mistake in another way, as it compromises European solidarity. This begs the real question whether European countries will combat the crisis together or as competing nation states. Most EU borders are already closed. So far, most of the crisis management strategies have come from Member States, while the European Commission has been almost completely silent in this period. A swift and binding commitment to European bonds, in particular to support the countries currently hardest hit by the crisis, with a view to getting a joint recovery effort off the ground, would have been a much-needed step in the right direction. This is also a question of choosing the right moment, because although in time an agreement will probably be reached and coronabonds will eventually be issued in one form or another, the right moment has passed, with some countries giving the proposal the cold shoulder. It is hard to imagine this being quickly forgotten in France, Spain or Italy. As a result, the image of 'Bazooka Scholz' will conjure up a completely different picture in Berlin or Cologne than in, for example, Milan or Madrid. When it really mattered, Chancellor Merkel, Austrian Chancellor Sebastian Kurz and Dutch Prime Minister Mark Rutte did serious damage to the European Union and its acceptance in those countries where the coronavirus is particularly rampant at the moment. Furthermore, actions at such times leave much deeper marks than they would normally.

In Germany, the Greens and DIE LINKE (The Left) have voiced their support for coronabonds, with the DIE LINKE Party Executive Committee adopting a resolution on the subject on 4 April 2020. The DIE LINKE group in the German federal parliament (the Bundestag) and the DIE LINKE delegation in the European Parliament have also endorsed such bonds. Moreover, Chairman of the Social Democratic Party of Germany (SPD) Norbert Walter-Borjans expressed his support for this proposal on Deutschlandfunk on 1 April, adding that this was about "saving Europe". However, that was the day after Finance Minister Scholz, an SPD colleague who is also Germany's Vice-Chancellor, and Markus Söder, the Minister-President of Bavaria and leader of the Christian Social Union (CSU), had appeared in Munich together and roundly rejected the bonds as the "wrong way" to go.

In early April 2020, northern Italy's towns and cities, the Madrid region and Alsace are disaster areas. Europe's internal borders are closed. The European Commission is powerless and at a loss as to the best course of action. EU Member States are competing to buy essential protective equipment. And to top it all off, an initiative by the countries that are currently hardest hit to secure genuine assistance and provide a clear signal of solidarity has been rejected offhand by others that have been less severely affected – at least so far – despite the unlimited economic support pledged by the German finance minister domestically. If the European Union manages to survive this, it will certainly not be in the form we have known it. 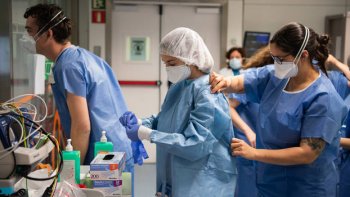 We Need a Global Struggle for Health