Edited volume: The Crisis and Future of liberal Democracy 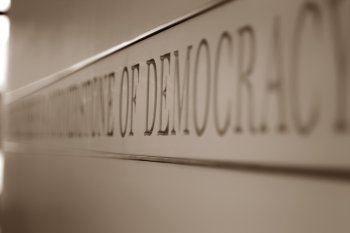 Simultaneously, other trends appear to suggest the re-politicisation and transformation rather than a decline of liberal representative democracy. Radical demands for participation from a variety of societal interests and groups abound. Equally, demands for inclusion, equality, and redistributive justice for those affected by political decisions suggest that democratic norms are not considered outdated by all. New political actors emerge that engage in alternative forms of political organisation; others purport the idea that only the direct transmission of political will can satisfy democratic norms. Polities are slow and ill-equipped to respond. Adjustments tend to be little more than makeshift concessions that fail to replace the mediating function attributed to established democratic institutions, while simultaneously falling short of averting further institutional erosion.

The observation that democracy is flawed, paradoxical, and insufficient is, of course, not new. For decades, political theorists and analysts have delivered scathing verdicts on the state of democracy, variously described as crisis of democracy; of representation; of legitimacy; of accountability; they speak of oligarchies rather than democracies; state capture by big money; declare them unfit to govern efficiently and efficaciously; and ill-prepared to respond appropriately to the long list of their own deficits.

Such diagnoses of the “hollowing of Western democracy” (Mair), of a “post-democratic” (Crouch) and even post-political (Rancière) era have also drawn our attention to the fundamental societal and economic changes these societies have experienced, which both resulted from democratisation and caused the crisis of democracy. The social, political and cultural shifts of the last half a century or so – modernisation, globalisation, neoliberalism (privatisation and marketization), consumerism, depoliticisation, emancipation, democratisation and fragmentation of societal interests – have arguably culminated in a turning point for liberal representative democracies.

The current “corona crisis” has reinforced these tendencies. The world is changing before our eyes, and so are liberal democracies. The political responses to the coronavirus pandemic are making it clear to us how vulnerable the foundations of liberal democracy, long thought to be irrevocable, are even in advanced democracies. In many countries we are experiencing restrictions on individual freedoms and political rights at a scale not seen since the Second World War. Authoritarian governments are using the crisis to advance their own political objectives to further limit democratic rights. As polities are struggling to tackle the multiple crises ensuing from the pandemic, they are changing their approach to the most fundamental questions of democracy, that is to the questions of “who decides on what for whom, and how”. Any debate on the future of democracy must take these changes into account.

The aim of this book publication, then, is to take stock of and analyse the problems of contemporary liberal democracy in Europe from a left-wing perspective. Second, it seeks to explore approaches to transforming democratic representation, participation and governance at any level (local, regional, national, supranational/transnational) with a view to forging an inclusive, equal, free, just and sustainable society. Paper proposals are invited to the following (non-exclusive) list of questions/topics:

Abstracts of up to 1,000 words outlining the proposed argument and approach must be submitted to Ada Regelmann at ada.regelmann@rosalux.org, subject line: “[your name] - Abstract: The Crisis and Future of Democracy”, by Tuesday, 2 June 2020, 11 am CET. Late submissions will not be considered.