Solidarity in the countryside 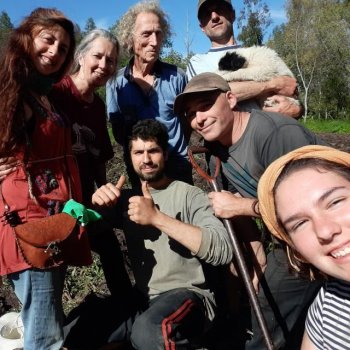 Here, the metropolitan area of Buenos Aires blends into the countryside.152 years ago, the vice president that gave this Argentinian district its name, died during a cholera pandemic. Today, Covid-19 puts the world on alert, and the province of Buenos Aires on standby. Due to the national lockdown that was declared by president Alberto Fernández on 19 March and has since then been extended several times, the rural roads of Marcos Paz are empty, far and wide.

Only during the opening times which are strictly limited, locals - and those that could leave the city for the countryside just in time before 20 March -, queue to enter the local shops to provide for the next week.

When I leave the house for the first time after days to get vegetables at the local cooperative La Verdu, the situation I attend seems grotesque at first: A woman reaching for products with plastic gloves from her car, covered with the now obligatory protective mask. One of the cooperative's members has helped himself with a scarf, since masks are hard to get in many places, and prices for the alternative tapabocas (mouth covers) had risen considerably. After seconds of surprise, I get used to the scene: There is already some sense of routine in everyone's gestures, a certainty in the way we are given indications for acting according to the rules of hygiene.

Later I speak to Paola Ponisio. She works as a volunteer at the cooperative in order to raise consciousness for the alternatives of ecological cultivation and selling of local products. “In that sense, we benefit from the quarantine”, she says, “no matter whether it is due to new needs in the working class areas, or to an increasing amount of time available, people deal with the option of creating a vegetable patch and growing their own products more than ever. We have never distributed so many seeds to the people as we are doing now”. This project of distribution of seeds aims at facilitating families the start with their own cultivation.

More than ever, people go to the Huerta municipal de la Esperanza (Vegetable Beds of Hope). And he municipality distributes packages of ecologically grown pumpkins, peas, lettuce and the like. “Aside from the new projects of the municipality, we are seeing an incredible solidarity in light of the situation. Many people donate something or organize themselves by some means or the other”, says Ponisio. The donations for the crop distributed by La Verdu allows them to contribute to the olla popular, a free warm lunch organized in the village Villars nearby. As much as the free lunches in schools for children in poor areas of the city, they are exceptions within the lockdown across the country, and they are, in many cases, the only option for families to get a warm meal.

Preparing for the unknown

Lucky are those companies, businesses or shops which could adapt to the current circumstances. Agronomist Guillermo Vivas, who concentrates on animal breeding, stresses that sale has doubled or even tripled some weeks ago, as regards beef and veal. People these times are not only buying for their current needs, but also for the coming weeks if they have a freezer. This is different with pork slices for sandwiches, and as people stay at home, there is no demand. He prepares his employees for the new situation with increased indications for hygiene precautions as well as specific protective clothing.

But if the emergency comes? Vivas has no solution: “None of us can tell what would happen if one of our workers gets an infection. In the end, this would mean that we have to close the corresponding sector entirely. We are unable to picture what this means for our company. And even now, with maintaining the sales relatively stable, the company is affected indirectly by the consequences of the lockdown. One of the intermediary vendors has been hit hard by the lockdown and he is owing us an enormous sum. And what can I do if a motor breaks? Who repairs it?” His main concern is a possible lack of vaccines for the animals. Once they are not supplied anymore, it will be impossible to continue breeding.

Recently Argentina presented its restructuring proposal for the debt it is owing to private creditors. With a reduction of interests of 62%, a considerable relief of capital and a deferral of payment, the government aims at leading the country out of the economic crisis deepened by neoliberal ex-president Mauricio Macri (2015-19). Alberto Fernández, his progressive Peronist successor, has received international recognition for his fast reaction to the corona pandemic, but the financial markets work according to other rules.

The government has introduced several initiatives to alleviate the situation of the disadvantaged: an extra pay for those working in the informal sector, or the spontaneous creation of work in the informal settlements. Several measures aim at preventing an aggravation of the already existing misery during quarantine.

Autumn sun is out in Marcos Paz, the first leaves are falling. No one knows how far this will go. No one knows when life, in Marcos Paz as elsewhere, could get back to normal again. The lockdown was just extended until 10 May, but the real end is not in sight.

Breathing country air these times is a real privilege, and the numerous stories of people helping each other are a gleam of hope.