The Wards are Filling Up 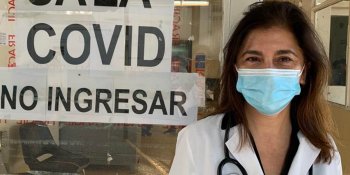 It began with a rather bizarre situation. Carlota Salomon, 26 years a doctor at the “José María Penna” hospital, Parque Patricios, Buenos Aires, had put on her elaborate protective clothing and approached her first coronavirus patient to draw blood. The doctor saw how the woman lying in her hospital bed was frightened by her astronaut’s gaze.

Fortunately, the patient could not see that I too was afraid,” said Salomon. This was because the doctor’s face was hardly visible due to the goggles, mouth-guard and helmet. “It was amazing to see how the relationship between the doctor and the patient changed with the beginning of the pandemic”, Salomon remembered.

The work during the first few months of coronavirus was characterized by a great deal of uncertainty: “When you traveled to work in the morning, you didn’t know what to expect,” says Salomon. Some days were very quiet. When a Corona-positive man from the nearby Ernesto ‘Che’ Guevara homeless shelter was brought in at the end of April, there was a lot of fear that this might only be the tip of the iceberg. After all, many people live in the same facility in a confined space. Fortunately, this pessimistic assumption was unconfirmed.

Dora, the patient, had the symptoms of a moderate pneumonia. Fortunately, the 56-year-old, having recovered, was discharged after a few days. But she must have felt like she was in a bad movie. The scene reflects how unfamiliar the handling of the epidemic was in Argentina at the beginning.

At the Hospital Penna, one of 13 public acute hospitals in the capital, they had started in mid-March to prepare 36 beds for potential coronavirus patients maintaining free this entire wing in the hospital in the south of Buenos Aires. Since this ward was the area where Salomon also takes care of her patients in normal times, her internal medicine ward was at the forefront of the fight against the pandemic from the very beginning.

She coordinates the deployment of 15 doctors, including two infectologists, and 20 nurses. Salomon had previous difficult experiences with infectious diseases, when she volunteered to work in the slums (villas) of Greater Buenos Aires and herself was infected with tuberculosis.

It seems tat it shall only be only a matter of time, soon, before these planned capacities will be fully utilised. A few days ago a patient was transferred from a psychiatric ward to Penna Hospital. Again, there is concern that the person will not remain the only coronavirus case from that institution.

Another time bomb in this regard are the aforementioned slums (called “villas” in Argentina). Several of these problem districts belong to the hospital’s catchment area, where there is little space for so many people. The last time a complete family was admitted from a “villa”. This is probably only the beginning.

Since mid-March, 64 corona patients have been treated at Hospital Penna – with a recent sharp trend upward. As it currently stands there are three to five new admissions per day, Salomon reports. Many more are being tested. Less serious cases are accommodated in hotels in the capital.

A 48-year-old man is to date the only patient to die of the virus in Hospital Penna. The patient also suffered from diabetes and Chagas disease. After two days in Solomon’s ward he was transferred to intensive care. But his life could not be saved.

The equipment of a public hospital in Argentina, which offers free care for residents and foreigners alike, is rather spartan, somewhat incomparable to hospitals in Germany, for example. In the coronavirus wing of the Penna Hospital, for example, there are only two beds with a private bathroom. The patients of the remaining beds have to share sanitary facilities. At present, people who are still being examined to see if they are infected are accommodated on the first floor.

They are separate from those who have already tested positive for corona and are on the ground floor.

“Fortunately, there are tests with faster results now,” Salomon says happily. Only a few days ago Argentine researchers succeeded in developing their own test procedure. This is important so that people with symptoms that may not be infected at all do not stay in hospital for too long where they might become infected. In addition, a modern test station has been set up at the Penna Hospital. Horacio Rodriguez Larreta, Buenos Aires’ Mayor appeared at its inauguration. The capital’s mayor is in the opposition coalition to the party currently in power at a national level.

But when it comes to infighting the pandemic, 54-year-old Laretta is on a similarly consistent course as the Peronist president Alberto Fernández.

Together they have succeeded in keeping the number of infections in Argentina comparatively low. As of May 22nd, there have been 9931 infections detected with 419 deaths were recorded nationwide (source Johns Hopkins University). Other Latin American countries are far worse off. But Argentina has not yet reached the peak of the pandemic. Salomon expects it to peak in June, if not in July.

The doctor welcomes the fact that leading politicians from opposing political camps are pulling together, as well as the general quarantine: “This is a good measure for our country, where money and resources are so unevenly distributed.” On the one hand, the COVID-19 emergency highlights the shortcomings and failures of the public health system. Between 2015-2019 the previous market-friendly neoliberal president Mauricio Macri reduced the Ministry of Health to a secretariat (now reversed) and some hospital buildings remained uncompleted. Now provisional hospitals are being built at a rapid pace.

The pandemic also shows that a public health system is a necessity: “A purely private system would not be able to do this”, Salomon added. Through the focus of current media coverage, many people have become aware of how badly health workers are paid.

“Compared to doctors’ salaries in Germany, the job here almost compares to an honorary position”, the doctor remarks with a touch of irony. “In order to earn well, many people work two, or even three, jobs in parallel both in hospitals or clinics.” Doing this also increases the risk of spreading the virus. Recently, there have been cases in several clinics in Buenos Aires where staff have tested positive.

Nevertheless, Salomon believes that now is not the right time to make salary demands during the crisis. This would, rather, have to be renegotiated after the pandemic. The doctor is motivated by the applause that citizens give to health workers every evening. “People’s appreciation is very satisfying.” Nevertheless, after two months of quarantine, the applause has subsided noticeably (if gradually). After almost nine weeks, the people seem to be a little tired of the state-imposed “house arrest”.

As for the staff, Salomon tells us that some colleagues cannot help because of their own health problems. On the other hand, young doctors have deliberately volunteered to work against the pandemic. The bottom line is that there are enough medical staff in the city of Buenos Aires. Bottlenecks are more likely to occur in the poor areas of the suburban belt around the city.

In Hospital Penna the staff has become accustomed to the situation as the weeks have gone by. “At first, everyone was somehow afraid of a new illness. There was new information every day. But as time went by, a community spirit developed to fight together. That’s a good thing”.

At least it’s something to give us courage for the coming hard weeks. Because the wards in the hospital are filling up visibly –but at least the doctor is no longer afraid.