The interview has been carried out by Timo Daum 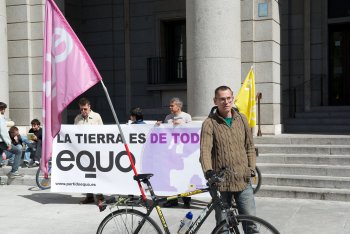 What are the keys to the “plan A” for air quality and climate change?

We considered three goals to be the most important: pollution, the use of public space, and climate change. We regard traffic first primarily as a public health issue, 3000 people die prematurely in Madrid every year due to cardiovascular and respiratory diseases. It is estimated that this generates a health cost of 6000 million Euros in the Madrid regio alone, that includes hospitalizations, medications and sick leaves. Additionally, Spain and the Mediterranean basin is the most vulnerable area to climate change in Europe. Btw: plan A means: there is no plan B.

What measures are comprehended in the Air Quality and Climate Change Plan?

We made a plan for air quality and climate change with 30 measures to undertake the necessary changes both in relation to air quality and the emissions that affect climate change. Most of the measures had to do with mobility, some to reduce traffic intensity and therefore the use of the car and the pollution it produces. Others to make a transition to cleaner technologies and then there are some additional measures that have to do with the rehabilitation of buildings according with energy efficiency criteria. We also established measures to make the city more resistant to climate change with a plan to make the city more natural, have more vegetation, more trees, more yards etc.

In “Plan A” which are the most prominent measures apart from Madrid Central?

In general, the goal has been to reduce the use of cars and move on towards cleaner technologies. The first measure is Madrid Central, a traffic ban for most of the polluting private cars excluding 1,300,000 of them from entering the perimeter. It is the most severe traffic restriction in any city right now.

The third measure was to transform public space to facilitate walking, reduce accidents and pollution. We enabled a pedestrian network and areas with speed limits of 30 and 20 km/h. The new "Municipal Mobility Ordinance" declared 80% of the streets to be limited to 30 km/h. In addition, a limit of 70 km/h was established on the M-30 (motorway surrounding Madrid’s inner borroughs) and all roads leading to the city center.

Another key measure was to increase bicycle mobility to 5% by 2025 with 30 km of new bike lanes per year. The bike was traditionally a residual or even exotic means of transportation, in 2008 only 0.22% of trips were bike trips, we increased that to 1.32% in 2017. A good part of this increase is due to the extension of the public service of electric bicycles “BiciMad”.

We also put a lot of effort into promoting the priority of public transport lanes and traffic lights to obtain a better service for municipal buses both in speed and frequency. 24 km of new bus lines were opened in 2018. And we decided that new taxis should be zero or low emissions. Madrid public transport is of great importance, it has a lot of tradition. Around 40 percent of the trips are made by public transport, while traveling on foot and the private car share the remaining 60 percent.

What is Madrid Central?

As regards mobility, the best known and most angular measure is Madrid Central (MC). Madrid Central is a low emission area that includes the downtown district of the city are 470 hectares with a resident population of 146,000 people but with a lot more visitors entering thehistoric center of the city obviously.

How was the Madrid Central project developed?

This was a process that started in September 2016 when we presented the proposals, a period of one year in which there were many meetings with the different sectors affected. In November 2017, the plan was approved and in November 2018, Madrid Central began operating with a transition period until January 15 to inform the population about the restricted traffic zone.

As of January 15, the owners of incoming cars entering without being authorized received a letter notifying them of the fine they would have to pay. And from March 15, fines were made effective. During that period between March 15 and June, pollution in the city center with respect to nitrogen dioxide decreased by 39 percent to the point that is considered to be the most effective low emission zone with regard to pollution by nitrogen dioxide.

Was there debate about privacy issues for the automated cameras and fines system?

There was no debate with the cameras because they already existed with the previous APRs (Residential Priority Areas). They had just to be relocated to a different and wider perimeter.

From the 15 M movement to Madrid Central, what is the historical connection, are they closely linked?

There is a very indirect link with the 15M movement that evolves over time. The first meeting "Municipalia" was closely linked to the anti-austerity movement born after the financial crisis. In 2015 Podemos in Madrid is born.

Without Manuela Carmena we would never have won the election, her charisma was essential. I believe that some degree of populism, emotional identification with the project and the candidacy is needed. A good program is not enough.

Once in the government a minority municipal sector is radicalized and raises as a priority to confront the government of Ahora Madrid (Madrid now). In the 2019 elections the majority sector presented itself under the label of Más Madrid with Manuela Camena as a candidate. The radical sector with UI and anti-capitalists presents itself as Madrid en pie (Madrid on foot) and obtains 2.5% of the vote without representation. It was probably a mistake for Podemos to move away from Manuela Carmenay considering Iñigo Errejón a traitor. If Podemos had supported the Manuela-Iñigo alliance, we would continue to govern the Madrid City Council and Podemos would have benefited politically from it.

Of the cities of change only Barcelona (with minority government) and Cadiz remain. Also Valencia but in coalition with PSOE. Unfortunately I think it's a stage that is over.

After not being able to renew the mandate in Madrid after the May 2019 elections, what is the scenario?

During the electoral campaign the Conservative Party (PP) already said that they wanted to abolish Madrid Central. They have a discourse according to which people have to be free to drive where they want. Before Madrid Central, 87 percent of trips in Madrid Central were already made by public transport, on foot or by bicycle. In other words, it really affected only 13 percent of the trips, and from these 13 percent the trips of the residents, who were authorized to enter MC, would have to be subtracted. That meanst, it really affected a very small number of trips, especially the most polluting and longest trips. People who go from one point of the periphery to another point of the periphery and prefer to drive through downtown instead of using the different highways that surround the city. In other words, by acting on a very small number of trips, a very high pollution reduction was achieved.

But the conservative party said that this had to be abolished. Then they win the elections, rather they reach an agreement with the extreme right to govern, and then on June 15 they announce that as of July 1 there will be no fines for entering MC. On June 29 there is a very important manifestation in favor of MC. The vast majority of the population of the city center realizes that the air quality with MC improves greatly, pollution decreases but noise also, the use of public space by cars decreases. So it is the first time that in Madrid there is a demonstration defending a measure that restricts the use of the car. There were around 30,000 people demonstrating on a Saturday afternoon, with temperature exceeding 35 degrees, so people have to be very motivated to go out with such high temperatures.

What advice can you give to those who want to follow your example? What could have been done better?

There are no recipes for success. I believe that parties or coalitions should be more liquid and open capable of working in networks and weaving alliances with groups and social alliances. The impatience of the most radical sectors hurt us a lot. When he rules you assume a large dose of pragmatism. You cannot win all battles.

We made a great effort for dialogue and participation with civil society. That is more important than hundreds of radicalized activists. We did not have enough time to deepen the changes. But I believe that certain changes have been initiated and are irreversible.

The massive demonstration by Madrid Central indicates that an important part of the citizenship has assumed the changes as their own. There is no going back.