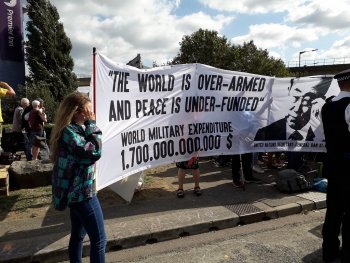 The international legal systems deployed to restrain the arms industry in the face of violations of human rights and humanitarian law are demonstrably weak. In certain areas, collective action has attempted to address this. Union workers in Italy refused to load generators onto boats laden with arms and bound for Saudi Arabia; diverse coalitions of demonstrators protested arms fairs in the UK; and Google employees refused to continue the corporation’s work on developing AI technology that could be used by the military. Though these actions may point towards an ability to mobilise against the arms industry, they also show that relying exclusively on the existing legal order is insufficient.

Regulatory systems for arms exports have been designed to contain glaring loopholes. The most prominent treaty on the issue, the Arms Trade Treaty, merely asks states to refuse or suspend export licences when there is an ‘overriding risk’ that they could contribute to serious violations of international human rights or humanitarian law. What amounts to an ‘overriding risk’ is not explicitly defined, and this definitional void grants states the leeway to continue granting export licences.

Additionally, following the privatisation of arms manufacturers across Europe, the arms industry continues to operate both with the freedom of private industry and with cossetted protections conferred by its close relationships with the state. In this sense, arms manufacturers have few obligations to conduct checks on the likelihood of violations and can largely defer to the state’s diligence system, however flawed. The extraordinary amount of money states bring in from their arms trade and its bearing on geopolitical positioning acts to corrupt, or at the very least dampen, their attempts to control arms exports.

In recognising the potentially corruptive force of the arms industry in the face of governmental decision-making, state regulation (while remaining in place and tweaked to close the existing loopholes) can potentially be supported by the development of a mandatory human rights due diligence (HRDD) regulatory system, moving away from the voluntary fig leaves of ‘Corporate Social Responsibility’ approaches that naively expect corporations to comprehensively scrutinise their own behaviour.

Peter Wieltschnig is a research analyst working in the areas of human security in conflict settings and the right to water. His background is in international humanitarian and human rights law.