"Permanent right to remain instead of undeclared work!"

Italy's farmworkers are organising successfully in the USB union 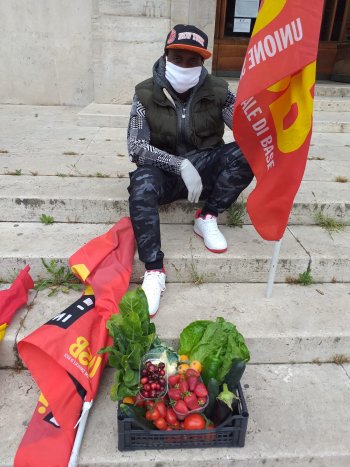 An interview with Patrick Segal Konde

Italy is one of the countries hardest hit by coronavirus. What impact is this having on farmworkers?

It's not that easy to say. The plight of workers has always been precarious; that didn't start with coronavirus. However, the risk that just one person could infect many others is one we're taking very seriously. Many farmworkers in Italy don't have residence permits and are totally defenceless in the face of the pandemic. That's why we as a trade union continue to fight very hard to improve labour and social rights.

What prompted the Unione Sindacale di Base (USB) to organise the strike on 21 May?

In the current pandemic situation, the first priority is to save lives. A second factor is the issue of 'regularisation', and thirdly there is pay, in other words ensuring that collective agreements are adhered to. Finally, there is the housing problem: many farmworkers are living in shacks with no electricity or running water.

Why is the USB criticising the government for a decree regulating the resumption of economic activity after the lockdown?

We're opposed to the way that the government is making work a precondition for people's very survival during a global pandemic, which is what this decree does. Prior to that, the Bossi-Fini law, for example, had already linked residence permits to work. Anyone who loses their job also loses their residence permit. We also reject the conditions for 'regularisation' contained in the decree, which will see people granted a six-month work permit provided they are useful for harvesting during this difficult period. After that they'll simply revert to their illegal status. Meanwhile, Romanian and Moldovan workers can't come here at all right now because the government won't guarantee them health protection; instead it wants to get the unemployed working in the fields in return for welfare benefits. Of course, many wouldn't be able to cope with such arduous work and are therefore refusing to do it. Even at this time of crisis, it is mainly migrants who are having to shoulder the heavy agricultural labour.

What are the USB's demands?

First and foremost, equal pay for equal work! The pay and working hours enshrined in agricultural legislation have to apply to everyone, including migrant workers. We're therefore also calling for the legalisation of all workers – permanent residence permits instead of undeclared work! We're demanding decent living conditions. In addition, all workers must be allowed to register their residence as soon as possible, as this is required in order to visit a doctor.

Who took part in the strike, alongside the USB?

There was strong support from the socialist left-wing alliance Potere al Popolo (Power to the People) and from student movements, but also from other groups such as Noi Restiamo (We Stay), which is present throughout Italy. However, the other unions backed the government's proposals. All across Italy, fruit and vegetables were dumped outside prefectures as an act of protest. The conditions of farmworkers in the north of Italy are basically no different from those in the south. There aren't big ghettos in the north as there are in the south, but the working conditions are the same. There are workers who are poorly paid, there are workers who have no roof over their heads and sleep in abandoned railway stations. There are workers who work without contracts and without documents. On top of that there is a mafia-style employment system called 'caporalato'.

Why is the USB also calling on consumers to show solidarity, as well as farmers and small producers?

Everyone suffers from the policies implemented by the food giants. The problem is the power of large distributors and producers. Big food groups and the large associations of agricultural producers who own vast swathes of arable land are jointly driving down prices for agricultural produce, thereby eliminating small farmers and producers. This naturally also affects the quality of the produce. The conditions of food production concern us all – that's why we need broad alliances.