“When women spend more time at home, it is never good for their rights”

An Interview with Anne-Cécile Mailfert 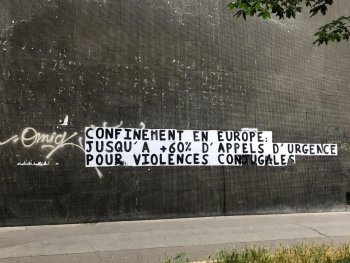 The lockdown has highlighted the fact that victims of domestic violence live in de facto lockdown all the time. Anne-Cécile Mailfert is a French feminist activist and President of the Fondation des Femmes (Women's Foundation). In early June 2020, she took the time to answer questions from A Season in Hell Editor Ethan Earle about violence against women during, before and after the Coronavirus.

Ethan Earle (EE): Can you tell us a bit about the Women's Foundation and its work?

Anne-Cécile Mailfert (ACM): The Women's Foundation was set up in March 2016 and takes action to defend women's rights and combat violence against women. Operating as part of the network Fondation de France, it supports organisations working on the ground to help women affected by violence. This involves: financial support, passing on the generous donations made by patrons and members of the public; material support, offering space to support organisations in the Cité Audacieuse, the first feminism promotion hub in the centre of Paris; and legal support through Force Juridique (Legal Force), a network of experts bringing together almost 200 volunteer lawyers and legal advisers providing support.

EE: Wherever lockdown measures have been imposed, domestic violence has increased. Can you tell us what the situation has been like in France? Has the government's response been adequate? And how has the Women's Foundation responded?

ACM: France was no exception: the lockdown saw an increase in domestic violence directed against partners and family members. In the first week, the Ministry of the Interior reported a 36% surge in reports of domestic violence involving a partner. By the end of the lockdown, the police were reporting a doubling in violence-related call-outs to homes, rising to 70% in some areas.

There are many facets to the difficulties caused by lockdown. For women facing violence, the restrictions on movement meant additional exposure to such behaviour (due to the extra time spent with their partner and the anguish fostered by the health and economic crisis); combined with the fact that it was harder, and in some cases impossible, to leave their homes (because of the closure of shelters, for example, or the problems seeking help discreetly). Support organisations had to bear in mind all these challenges in supporting women at a time when they themselves were having to reorganise their activities on account of COVID‑19 and needed additional equipment to do their job (laptops for working from home, masks, sanitiser gel, etc.).

Measures introduced by the French government aimed to make it easier for women to report abuse, for instance by allowing them to text the police (on the number 114) or report violence to pharmacists, and by setting up drop-in centres at supermarkets. The effectiveness of these measures has been mixed, and they don't solve the problem of how to look after and safeguard the women concerned. Long before COVID-19 and the lockdown, women’s organisations were warning of the lack of resources for policies to combat violence against women, and in particular the underfunding of shelters. These difficulties did not disappear with the lockdown. Indeed, it threw them into stark relief.

Seeing what was happening, the Women's Foundation rolled out its #ToutesSolidaires initiative encouraging solidarity. The campaign addresses organisations’ most pressing needs, namely the equipment they require for their work as well as emergency accommodation. This is an unusual move for us: in normal times, we see our role as funding areas not covered by public policy, in other words encouraging innovative initiatives, on the margins, while the government is responsible for financing accommodation, for example. However, the lockdown period was anything but normal, and it was inconceivable to leave women in the lurch under these circumstances. Our campaign appealing to the generosity of the public raised more than €2.5 million, which was then reallocated to support organisations so that they could organise their telecommuting activities and provide emergency assistance to women facing violence.

This assistance takes the form of funding for more than 40,000 overnight stays until the end of the summer, so that women and their children forced to leave their homes can be housed immediately in decent accommodation. It also covers food aid and basic necessities. Finally, financial assistance was provided to services such as the chat room run by the organisation En Avant Toute(s), offering a sounding board and support for women, which is now open seven days a week and can be accessed via the Comment on s'aime ? website, and the organisation Résonantes's App'elles alerts app. Such technological and professional solutions were in high demand during lockdown because of their discreet nature.

EE: With many women saying they're emerging from lockdown exhausted, the COVID‑19 pandemic has once again highlighted social and gender inequalities. What impact will the past few months have on women's lives in the post-COVID world?

ACM: Unsurprisingly, when women spend more time at home, it is never good for their rights. As well as the risk of greater exposure to domestic violence, many issues that existed beforehand were felt more acutely or were exacerbated. Access to abortion became more complicated, having to work from home and home-school their children placed a much-increased mental burden on some women, and society came to rely heavily on health and care workers and other very precarious female-dominated occupations. Conversely, of course, women's scant presence in decision-making bodies and in the media did not change, and in some cases actually got worse! So they have every reason to emerge exhausted from the lockdown.

Obviously, it is very difficult at this stage to predict the medium- or long-term impact of the lockdown on women and their rights. However, what support organisations have been anticipating, and what we've been seeing for a few days now, is that those women who couldn't speak up during lockdown or whose problems went undetected by neighbours or support networks now feel able to speak out as the lockdown is eased. This new surge of requests for help will add to the pressure on support organisations, making it vital that they aren't left to fend for themselves as the epidemic subsides. The lockdown has also highlighted the fact that victims of domestic violence live in de facto lockdown all the time, as they are subject to the persistent control of their partner and aren't free to move around.

We also need to make a medium- and long-term assessment of how this lockdown has affected women and their rights, whether from an economic or physical or mental health perspective, and also their access to reproductive and sexual rights. How many illnesses that particularly affect women have been misdiagnosed or not diagnosed at all as a result of the lockdown? What impact has lockdown had on women's morale? How many women have had to resort to desperate methods to have an abortion beyond the legal time limit? The fact that the French government was not prepared to relax these limits doesn't bode well in terms of positive momentum for women's rights in the coming months.

EE: There is talk about radical changes to society's priorities and public policy following the health tsunami caused by the pandemic. What should these changes be from a feminist perspective?

ACM: We continue to advocate more resources for public policies to combat violence against women and promote gender equality. The Women's Foundation demonstrated alongside victims' families and other organisations in 2019 during a major protest against femicide, which led the government to organise a nationwide conversation on domestic violence. While this did result in some real headway in legislation, the resources provided were insufficient to enable a true Copernican revolution in the protection of women facing violence. The most important point is the lack of refuges: an area in which France is failing to live up to its international obligations under the Istanbul Convention. Lockdown has shown how vital it is to have places where women can seek safe shelter. Without the appropriate resources, it won't be possible to achieve a long-term reduction in domestic violence.

Also, the guidelines on judicial hearings on domestic violence that were introduced during lockdown should become common law, and courts should always rule on these cases urgently and as a priority, because they are and always will be urgent: action must be taken as quickly as possible whenever a woman is in danger.

More generally, if we could wave a magic wand and create a feminist world post-COVID‑19, we would need to accord more status to the work that is currently mostly done by women, whether in their jobs or at home. The care professions, which were on the front line during this health crisis, are dominated by women, and are underpaid and undervalued. Furthermore, lockdown may at least shed some light on how much work women do in the home. In short, women are paid less despite doing more than men! Women must be given the means to regain their independence.

EE: Finally, can you give us a reason to be optimistic about the future of gender equality?

ACM: There is growing awareness within society of the impact of domestic violence suffered by women, and during lockdown this led to a fourfold increase in donations to the Women's Foundation in support of our #ToutesSolidaires campaign. The public is alive to this issue, and organisations are doing incredible work to help women facing such violence. With more and more of us fighting for equality and against violence, we will get there in the end!

Anne-Cécile Mailfert is a French feminist activist and President of the Women's Foundation (Fondation des Femmes). Formerly President of the feminist campaign group Osez le Féminisme!, she is the author of two books, Tu seras une femme, guide féministe pour ma nièce et ses ami.e.s (You'll Be a Woman: A Feminist Guide for My Niece and Her Friends) and Ils ne décideront plus pour nous, Débats sur l'IVG, 1971-1975 (Men Will No Longer Be Deciding for Us, Debates on the Voluntary Termination of Pregnancy, 1971-1975), published by Éditions les Petits Matins in 2017 and 2015 respectively.

To make a donation, visit fondationdesfemmes.org.