An Interview with Éric Piolle

The mayor of Grenoble has assembled a broad coalition of Greens, the Left and citizen groups to do a different sort of politics in the city of 158.000, located in Southeast France at the foot of the Alps. On the cusp of his second term, Éric Piolle sat down with Ethan Earle to discuss Covid, Macron and the “humanist arc” he seeks to build.

Ethan Earle (EE): What can you tell us about the easing of lockdown restrictions in Grenoble? What's the situation with the virus and how are people there coping now?

Éric Piolle (EP): The lockdown was very well observed here. We were fortunate that there wasn't much virus in this area at the time of the lockdown, and we had the collective discipline to follow the rules and protect our health. Health and care workers were able to do their jobs properly, increase hospital-bed capacity and coordinate the public hospital with private clinics and GP practices. This is something of a breakthrough, which we're keen to maintain in the future.

Firstly, of course, we focused on the handling of the health crisis. We'd set up a crisis unit even before Emmanuel Macron made his announcements. This meant we could put in place food aid from Tuesday, 17 March, because of course the charities that normally do this no longer had any volunteers because these were retired people who couldn't leave their homes.

On 17 March, we launched an online platform called Voisins, voisines (Neighbours), with over 2,500 people signing up straight away to give their time tutoring, shopping and doing other good deeds. Much of the food distribution was done by these volunteers.

We also distributed masks to 14 gyms, taking all the necessary safety precautions. Volunteers came forward to help staff set up a call centre for making appointments, which could also be made online, and in fact these volunteers continue to be involved in community life in Grenoble even now. Then, on Friday, 20 March, we launched a festival called Fête comme chez vous, aimed at keeping cultural life going and maintaining social ties, for residents and cultural players alike. The cultural sector has been hit hard and will be for a long time to come.

EE: Can you comment on the handling of the health crisis by the government and Emmanuel Macron, as regards hospitals, schools and the economy, as well as their vision for our collective future? And how do you see France learning from this crisis and using it to improve people's lives?

EP: The current French government has reached an impasse in its ideological orientation and its political project. Macron's plan in 2017 was to cut funding to public hospitals and reduce beds. When the coronavirus outbreak started, there was a two-month delay in taking action. Until 11 March, the talk was of the virus 'stopping at the borders', a ridiculous notion reminiscent of the discourse at the time of the Chernobyl cloud. For those two months, we thought the government's plan was to force through his pension reform under Article 49.3 of the French Constitution, at a time when we were already in the thick of the pandemic.

Lockdown was obviously the only sensible decision, so it was the right thing to do and I support it. But it was taken too late. In crisis management, the first decisions you make are crucial. Then there was also a lack of leadership in the manufacturing of masks, respirators and so on. Back in January, my friends in the industry were telling me that the respirators they were making were being sent to Germany, which was already getting organised.

But the worst symbol was when Macron said he thought he was at war – a view I don't share; it's a virus, not a war. He dispatched his commander-in-chief [Health Minister] Agnès Buzyn like a provincial prefect [she resigned to run for mayor of Paris for Macron's LREM party]. Her successor, Olivier Véran, did what he could, but he arrived on the scene too late: [Prime Minister] Edouard Philippe and Macron had already messed things up.

So, what about the main areas of concern going forward? The big challenge will obviously be education. The health measures initially introduced in the education sector are going to have to end. We can't spend our evenings drinking beer outside cafés and queuing up in shops while telling ourselves that our children – who may be less likely to carry the disease anyway – can't go to school. That would be a disaster for a whole generation, an educational disaster of massive proportions, so we have to get children back to school. Also, a major package of financial support for the arts is vital. We know that the cultural sector is going to be affected for years to come. In Grenoble, we'll be there to support it because creativity, artists, cultural practices, engagement and curiosity will help us to forge tomorrow's world.

EE: With the second round of municipal elections due to take place on 28 June, you're in a very strong position, having secured over 45% of the votes in the first round. What are your main plans for the next term, and how has the pandemic affected them?

EP: Thousands of people contributed to the original programme, so we reopened our project platform to garner ideas and then also reconvened our drafting committee to think things through carefully. In the end, the main underlying ideas – reducing advertising, increasing nature in the city, creating more space for soft mobility, pedestrianisation – are still very relevant for the future. All the work to be done on environmental health – a major issue for us, encompassing mobility, health and food – is important because it affects everyone. Situations of economic, cultural and social precarity have been much in evidence during the lockdown. They're something almost everyone experiences, so they unite us.

What were we lacking? We were lacking contact with nature, but also social interaction, with isolation reaching crisis levels. We were also craving meaning and a sense of local connectedness, as we've seen with all the developments around local food. So, there are drivers we can use to amplify the transitions and maximise our ability to make the commons a fulcrum for our society, allowing everyone to have security and give meaning to their life. In this regard, we remain upbeat and determined.

It's true that voters gave a ringing endorsement to our programme, with almost 47% backing it, and also that turnout was down by half as much in Grenoble as elsewhere in France: 10 points in Grenoble compared with 18 points nationwide. So, we feel that a mobilisation is under way, and we hope that it will continue so that we can take forward the plans we have, in which everyone has a place.

EE: Your coalition, Grenoble en Commun, is made up of 13 parties, including EE-LV, LFI, PCF and Génération.s. Is the dream of a new coalition of the French left becoming a reality in your city? How have you achieved this, and do you think the French left could learn lessons from this experience?

EP: Indeed, we wanted to bring together the whole humanist arc, and yes, almost everyone is included. Half of the Socialist Party is also with us, although the other half has opted to join forces with a political hotchpotch of former right-wing elected representatives and LREM activists. We're currently emerging from a six-year period in which there was a less broad coalition, with no Socialists or Communists. But we'd already seen that by building a programme together, we were all able to get behind that programme and take it forward.

And we're one of the few major cities – and maybe even the only one – to be run by a single-group majority, meaning that after the election, individual parties don't start reclaiming their own members. There are 42 of us, out of 59 elected members of the city council, and we completed the whole term with these 42 councillors. We've held two-day seminars, we go to training centres in the mountains three times a year, we've consolidated and honed our positions, and fostered curiosity and engagement. Ultimately, we've found that this enables us to combine our visions, and develop a programme based on issues that matter to us, as well, of course, as being able to fight for equality, to proclaim ourselves resolutely of the left, resolutely non-productivist, resolutely feminist and in solidarity with all struggles against discrimination.

EE: Do you think that's the lesson that the left can learn from this experience?

EP: Yes, because it's by talking to each other that we find common ground, and we're proud of that common ground. It means that we've really worked as a team, and I think that in negotiating the political challenges that lie ahead in the coming period, bringing together this humanist arc will be key if we want to drive an agenda that can command the approval of a cultural majority in France. And we'll need to do that if we don't want to see a Macron-Le Pen showdown that could have a detrimental impact on social and climate policy.

EE: Some say that in the current global context, there's a struggle between city and national government, with plenty of left-wing experiments and public policies at city level, whereas at national level we're surrounded by a mix of neoliberalist and nationalist far-right politics. Are cities currently the shared home of the left? How can we build a politics that unites these positive experiences at the municipal level into a national strategy?

EP: It's true that cities have been gaining in influence, particularly in the last few years since 2015, since COP21. In fact, they've been gaining in influence since the failure of the Copenhagen climate conference in 2009. It's because, ultimately, national governments are paralysed, pressurised by lobbies – that is when they aren't lobbies themselves. The French government, for example, includes bosses and lobbyists from Danone and Areva, among others. What's interesting about city-level politics is that you can really get things done. Look at what's happening in Innsbruck, Amsterdam, Barcelona, certain German cities... This ability to get things done allows different players to converge and combine their visions, to build a common mythology much more easily than in the national political discourse which, as things stand, is a discourse not of doing but of strong words mixed with a kind of Jupiter-like power.

This 'Macronesque' power is overwhelming. It has a Jacobin quality, whereas, in fact, modern society should be based on equality, a network of actors working together, capable of coming together in coalitions on specific issues at specific times and then moving on to forge other coalitions on other issues. In these encounters, we need to create places of friction, places of engagement capable of accommodating uncertainty and also enabling those concerned to stand together behind strong values when the going gets tough electorally.

And that's another lesson to be learnt from our experience in Grenoble – and one which I'm also trying to put into practice with the national party leaders. There will be centrifugal forces, whether in party politics or due to diverging views on issues such as Europe, migrants, nuclear power, etc. But we do in fact command a cultural majority. We just have to find a way to give it a political outlet. This also involves forging human ties of trust so that we can get on with each other better and then be able to show solidarity when things get tough. 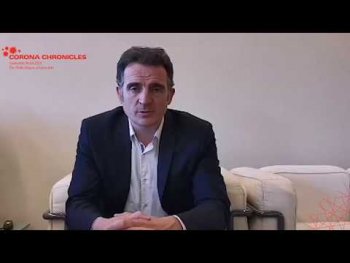