Booklet on the militarisation of the European Union 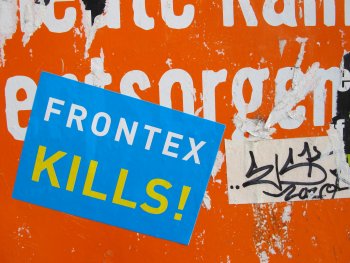 Ideas, concepts and attempts to militarise the European Union have been voiced and made long before, but it’s since the Brexit referendum in 2016 that they have gained significant traction. In a few years, EU member states and the EU institutions – flanked by lobbying efforts from the European arms industry – have driven forward the militarisation of the EU in a worrying pace. The establishment of the Permanent Structured Cooperation (PESCO) and the Coordinated Annual Report (CARD) as well as the proposal for a European Defence Fund (EDF) form the backbone of an advance towards military priorities in the cooperation of member states – away from peaceful and social priorities.

Based on the notion that the European project is under threat and that a “stronger Europe” is needed at the global stage (Global Strategy for the European Union’s Foreign and Security Policy, 2016), the development of joint military capabilities is fostered, commitments to increase military spending are being made and calls for the EU to make use of its military weight are getting louder. As further social or economic EU integration is rejected or blocked by member states, this strategy seems to aim at demonstrating the EU’S ability to act, to integrate right-wing populist actors and thus to forge a new consensus for Europe.

However, the discursive, structural and financial shift to military priorities will neither ensure peace nor be able to contain the structural causes of the conflicts to be fought, which have been and will continue to be fueled not least by the exploitative economy of a neoliberal EU. Despite this alarming development, the EU’s militarization and its possible long-term implications on the unions’ nature are not well known in the left and progressive spectrum in Europe. There is a lack of political education materials that provide a comprehensive but compact overview of the basic elements of the EU’s militarization. The booklet should address this gap and provide an introduction to this thematic complex.

The Rosa-Luxemburg-Stiftung Brussels Office is calling for tenders to write and illustrate a booklet that explains in an accessible and critical manner on up to 30 pages (8.000 – 10.000 words / 15-20 text pages) the discourses, structures and actors that form the core of the EU’s militarisation. It shall be aimed at a non-specialist audience and act as a short compendium introducing readers to the thematic complex. The booklet shall combine text and graphic illustrations and adhere to referencing standards and the RLS style guide, which will be made available by RLS Brussels.

The booklet should address the following topics:

The booklet should contain graphic illustrations (approx. one graphic per text page / 15 - 20 graphics) that help to visualise, underline and understand the written content and/or provide additional information.

Graphics illustrations can include, but are not limited to, maps, graphs, charts, matrixes, diagrams and free drawings. We are keen to receive applications from illustrators who have experience in taking a creative approach to political subjects.

The graphics should be developed in close collaboration with the author(s).

Around five graphics should be available as stand-alone graphics that can be used on social media or in context of other publications.

Both, the text and the graphics should be easily adaptable to new developments to keep the publication up to date.

Author(s) will be asked to actively participate in the distribution of the booklet.

The work should be completed by the end of March 2021 the latest and can be delivered in English or German.

Tenders for conceptualising and writing must include a short abstract (500 words) outlining the author(s)’ qualification and approach to the task, CV(s), examples of previous work (in English or German) and a price offer.

Tenders for illustrating must include CV(s), examples of previous work and a price offer.

Complete applications must be submitted to Axel Ruppert at axel.ruppert@rosalux.org, subject line: “[your name] – Tender: Booklet on EU militarisation”, by 09.10.2020, 11am CET. Late submissions will not be considered. All applicants will be informed of the outcome of their application by 16.10.2020.