Processes of Decolonisation in European Museums 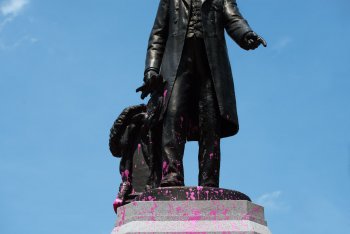 Since the late 1980s, museums have been criticised for the role they played in legitimising colonialism and imperial expansion. Whereas museums were traditionally assumed to be objective institutions of knowledge production and dissemination, they have come under scrutiny and are currently in a process of reassessment, summed up by the term ‘decolonisation’. Although the intention and meaning of this term can vary according to the local and national context and understanding of the past, the underlying assumption sees museums as powerful tools to construe and institutionalise structures and power and to preserve and institutionalise our reading of the world.

As a result, European museums as well as activists are increasingly challenging and reimagining exhibitions, objects and narratives within museums. In this paper, I give a short overview of the discourse on decolonisation and the responses of different museums in four European countries, France, Germany, Belgium and the UK. These countries all have a colonial past that they have long struggled to confront. The immanent critique in postcolonial theory and decolonisation movements is that colonial structures still shape institutions, power and knowledge production.

Today’s museums developed from private collections that grew throughout the 16th and 17th centuries when ‘explorers’ increasingly travelled the world and collected objects and artefacts for preservation and study (Macdonald 2007, p. 184). As some of these collections laid the groundwork for today’s museums, such as those of Hans Sloane, Carl Linnaeus and Alexander von Humboldt, these individuals are commemorated for their great achievements and contributions (Macdonald 2003). The rise of nation states and growing competition between them throughout the 19th century institutionalised museums as tools of education, but also as means to showcase scientific and technological achievements and construct a national narrative (Bennett 1995). Scholars have pointed out that by the end of the 19th century, competing nation states in Western Europe saw a rise of museums and their growing world collections demonstrated power and legitimised colonial expansion. Through the narratives presented in the ethnological museums, the colonised other was imagined as primitive and grateful for being civilised while at the same time the harsh realities of life in the colonies were downplayed (Penny 2002).

From the late 1980s, scholars and activists started to questions museums’ authority as well as narratives and collections that were based on and upheld colonial values as well as racial theories and hierarchies (Clifford 1988). In particular, it was argued that museums’ practices and routines, such as the way they classified or contrasted collections, reproduced colonial binaries of West/non-West and complexity/simplicity (Boast 2011, p. 63).

Museums are increasingly responding to this criticism and are rethinking their exhibitions and narratives. Some have built new buildings with the aim of redesigning their displays and presentations of ethnological collections (Musée du Quai Branly, Paris 2006, Humboldt Forum, Berlin 2021). However, this has attracted criticism that the differentiation between (Western) art and (non-Western) artefacts still remained and the exhibitions neither addressed the colonial histories of the collections nor included funds for provenance to research the ownership of artefacts.[1] Other museums have introduced temporary exhibitions reflecting colonialism collections and narratives, such as the exhibition on German colonialism at the Deutsches Historisches Museum in 2016, or examining the issues surrounding ethnological collections, such as WORKING SPACE PROLOG at SKD/Grassi Museum für Völkerkunde Leipzig (2016-2020).[2] Some museums have even changed their names to remove colonial associations, such as Hamburg’s Museum für Völkerkunde (Museum of Ethnology), which since 2018 has been called Museum am Rothenbaum – Kulturen und Künste der Welt (MARKK), or the Musée Royal de l’Afrique Centrale in Brussels, known as the AfricaMuseum since 2019. Permanent exhibitions have been changed (sometimes more than once) and ‘problematic’ items, such as offensive images of people of African descent (AfricaMuseum 2019, Grassi Museum 2015) or human remains (Pitt Rivers Museum, Oxford 2020), have been moved into storage or redressed and put back on display with more context (Bernhard 2019).

Another question that has been raised is that of provenance and ownership of artefacts (Sarr and Savoy 2018). Whereas the restitution of artefacts has been progressing slowly, often due to legal concerns, some museums have returned human remains in their possession (SKD, 2017/19),[3] or removed them from their displays ( Pitt Rivers Museum, 2020).[4]

In addition, the museum and heritage sector in the UK is reflecting on the legacies of the transatlantic slave trade and how it shaped historical and modern institutions. The International Slavery Museum was opened in Liverpool in 2007, and Bristol’s social history museum M Shed included a section on slavery in its permanent exhibition (2007). Although the debate began back in the 1990s, the toppling of the Edward Colston statue during the Black Lives Matter protest in Bristol in June 2020 (Jorek 2020; Dresser 2020) prompted museums and heritage sites all over Britain to announce that they would critically reassess collections and narratives in the light of slavery and reveal the hidden histories of collections (Carver and Gaschke 2020; National Trust 2020). The British Museum moved a bust of its founder Sir Hans Sloane to a new, less prominent position and added information about his involvement as a slave trader and anti-abolitionist (2020).[5]

“Nothing says decolonisation more than two white men from England talking about it.” (Comment by a colleague during a conference in July 2020)

This provocative quote was written in a chat during a conference on anthropology at which the word ‘decolonisation’ cropped up during a number of panel discussions. It highlights a racial dimension to institutional discrimination and power relations that the discussion on decolonisation sometimes fails to address: the question is not only about artefacts, collections and exhibitions, but also about who is in charge of decision-making and in the position of power. Changing and rearranging exhibitions in line with current debates runs the risk of reproducing historical and handed-down power at the expense of (particularly non-white) activists and scholars who have been raising the issue for decades. Acquiring their knowledge and using it to build careers and legitimise institutions without including them in paid positions at multiple levels contradicts the idea of decolonisation, as structural inequalities still remain in place. ‘Decolonisation’ is not only the reassessment of exhibitions and collections, but also an assessment of power, access and barriers that are held in place through the colonial legacies of an institution (Shoenberger 2020). Although the recent amendments and reflections show that museums are willing to confront colonial legacies, they run the risk of reproducing colonial structures when people in power or in long-term paid positions are overwhelmingly white (Boasts 2011). ‘Decolonisation’ also means acknowledging that structural barriers have historically excluded different groups and still do. It means sharing power and authority, finding ways to include these different groups at a range of levels and rethinking the role of the institution. In particular, in their educational capacity, museums have a responsibility not only to teach but also to provide museum qualifications and career paths for people from different social and ethnic backgrounds. In September 2020, Birmingham Museum and Art Gallery announced the appointment of Sara Wajid and Zak Mensah as joint CEOs. It was the second appointment of non-white museum CEOs in the UK, and has been heralded as a “new era”, “trailblazing” and an overdue move to represent the city’s diversity.[6]

Macdonald, Sharon (2007): Exhibitions of Power and Powers of Exhibitions. An Introduction to the Politics of Display. In Sheila Watson (Ed.): Museums and their communities. London: Routledge (Leicester readers in museum studies), pp. 176–197.

National Trust (2020): Addressing the histories of slavery and colonialism at the National Trust. Available online at https://www.nationaltrust.org.uk/features/addressing-the-histories-of-slavery-and-colonialism-at-the-national-trust?campid=Social_Central_Summer_Twitter_slavery-remembrance-day, checked on 24 August 2020.

Shoenberger, Elisa (2020): What does it mean to decolonize a museum? MuseumNext. Available online at https://www.museumnext.com/article/what-does-it-mean-to-decolonize-a-museum/, checked on 27 August 2020.