Report from a decolonial rally in Berlin 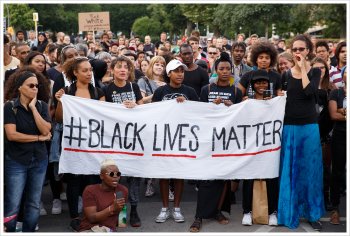 On 25 May 2020, George Floyd was killed in Minneapolis by white police officer Derek Chauvin, who pressed his knee into Mr Floyd’s neck for 8 minutes and 45 seconds. Worldwide protests erupted in the weeks following Floyd’s murder. Police violence and systems of racism became a global conversation. In response, nearly 200,000 people took to the streets in Germany. Angela Davis called these global protests the biggest rebellion since the 1960s.

Weeks later, protesters at a UK Black Lives Matter Demonstration threw the statue of the British slave trader Edward Colston into the Avon river. Images and videos went viral, shedding light on the decolonial politics of remembrance as a part of the global anti-racist struggle. This also struck a chord in Germany.

Sunday, 23 August could have been like every other year. People gathered in Berlin Mitte to demand that a street called Mohrenstraße (Mohr is an old derogatory term for Black people. However, it is still widely used for streets and pharmacies.) be renamed – but this year was different. As two people active in the global movement for social and economic justice, we gathered decolonial perspectives knowing their political purchase held new promise.

The atmosphere was fun. The local parliament had just officially announced the street would be renamed after Anton Wilhelm Amo, a Black scholar who taught at the University of Halle in the 18th century. His name will mark this street and Berlin for years to come. This was nothing less than a victory, albeit a minor one.

A rally at the feet of Germany's biggest colonial monument

The festival kicked off with a rally in front of the newly reconstructed Berlin Palace (Berliner Stadtschloss). This ostentatious building surmounted by a golden cross will soon host the Humboldt Forum. It was a warm and windy summer day – in fact, the very date that marks the 229th anniversary of the Haitian Revolution.

This was the seventh year in a row that Berlin-based coalition Decolonize Berlin e.V. organised the event. One of its founding members, Tahir Della, is a spokesperson for the Initiative for Black People in Germany (ISD). “The renaming of the Mohrenstraße is a remarkable success for Decolonize Berlin. The demand for decolonisation is very present at the moment,” he tells us.

This hasn’t always been the case. In fact, Germany’s colonial history and its effects had little to no role in the country’s collective memory – despite the fact that decolonial efforts have had an impact when it comes to renaming streets, at least in Berlin. This larger shift in consciousness means the struggle seems far from over. “With the Humboldt Forum in the City Palace, the City of Berlin has (re)constructed the biggest colonial monument in Germany”, Della tells us.

Created by Italian architect Franco Stella, the architectural design of the building is supposed to link tradition and modernity. Instead, as we look at the giant building, we feel a strange combination of anger and amusement at this manifestation of ignorance. In front of the reconstructed baroque facade of the Berlin City Palace a huge banner dances in the wind: “Tear this Down!”

The Humboldt Forum, colonial past and start-up flair

Constructed in 1443, the Berlin historical palace was considered a symbol of the Prussian monarchy, under which German colonialism was placed under state protection by the so-called Congo Conference of 1884. However, the palace was partially destroyed during World War II. These ruins made way for the Palace of the Republic (Palast der Republik), the seat of the parliament in the German Democratic Republic (GDR). In 2003, the German federal parliament decided to tear down the Palace of the Republic and to reconstruct the old Berlin Palace. This history is lost on anyone passing by.

The golden cross on top of the building wasn’t always there. It first appeared under the reign of Friedrich Wilhelm IV of Prussia in1854. With the cross, he sought to demonstrate his desire to rule as a member of the Evangelical State Church of Prussia. In May 2017, 163 years later, this desire was revived thanks to a million euros donated by German businesswoman Maren Otto. This anachronistic building is again being reconstructed. After seven years, the Humboldt Forum will open the doors to its high-tech interior in December 2020.

The construction stirred controversy. In fact, years of protests against the construction led different groups and individuals to join forces in the coalition NoHumboldt21. In 2013, they published a resolution that garnered international support from over 80 human rights organisations.

The coalition demanded a stop to the construction work and opened a broad public debate. According to NoHumboldt21, the construction concept violates the dignity and property rights of people in all parts of the world. “It is Eurocentric and restorative. The Humboldt Forum stands in the way of equal coexistence in a migration society,” said Della.

At the centre of their criticism are the works of art stolen in the course of Germany’s colonial endeavours, during which time most of the more than 500,000 valuable items were brought to Berlin. They are now to be exhibited in the Humboldt Forum.

“The illegal owners of the exhibits must disclose the exact history of each item,” explains Mnyaka Sururu Mboro, board member and co-founder of Berlin Postkolonial. “The UN resolution on that subject is very clear. The return of works of art to countries that have been victims of colonial expropriation must be ratified.”

But it is not just about the works of art he tells us, the several thousand skulls from the former German colonies still stored in the depots of the German museums must also be returned.

The rally continues into the afternoon. Many activists give passionate speeches and artists share political performances. We reflect on the implications of these demands at the global moment. The stolen remains of colonial subjects lie behind a Baroque facade under a golden Prussian cross in a modern high-tech interior. This image haunted us. It felt terrifying to know what is at stake and how quickly colonial histories regain cultural meaning. As the Humboldt Forum’s website puts it: “42,000 m2 for a variety of voices, exchange and diversity.”

The many manifestations of Germany’s colonial past

Demonstrators slowly started to move. We leave the Lustgarten and head towards the future Anton-Wilhelm-Amo-Street. A rally is taking place on a square close to the street. “This is a success by activists organised in different parts of Germany with a view to breaking the silence surrounding Germany’s colonial past,” says Simone Dede Ayivi, a local performance artist, director, author and part of the decolonial movement in Germany.

For more than half our lives, very few people talked about the fact that prior to World War I Germany was the largest colonial Empire after France and the UK. The colonies of the German Empire stretched from the African Continent to the Pacific and China. Although it did not exist as long as other empires, colonialists from different German states have always participated in the colonial endeavours of other empires before and after the state-protected colonial period. The colonial imagination has left its marks on German culture in numerous ways.

This fact inspired a website called Tear this Down - Eliminate Colonialism Now, launched by the Initiative of Black people in Germany (ISD) and the peng! collective, supported by over 20 different initiatives. The page consists of a map of Germany indicating locations, statues, streets and public spaces named after colonialists.

“We demand a public change of perspective. We don’t want to pay homage to colonisers. We want to honour the people who fought against colonisation, oppression and exploitation. This is a must for the anti-racist society we are fighting for,” says Ayivi.

One of the streets shown on the map is Nettelbeckufer in the city of Erfurt. “The successful renaming of the Mohrenstraße to Anton-Wilhelm-Amo-Straße showed us that it is possible for renaming campaigns to be successful”, says Mirijam Elomda, an activist and member of Decolonize Erfurt, an East German group that is fighting to have the street renamed to Gert Schramm Ufer.

The street in Erfurt was named after Joachim Nettelbeck in 1905, right when the Herero and Nama Genocide was being committed by the German colonial army in what is today Namibia. He was a commanding officer on a ship that brought slaves to the West African coast. He was responsible for the purchase of slaves and reported on the inhuman conditions aboard the ships without remorse.

Gert Schramm, a Black German, was born in a flat in Nettelbeckufer in 1928. His paternal family were survivors of the transatlantic slave trade. Schramm was a survivor of the concentration camp in Buchenwald. His father died in Auschwitz.

Who do we remember?

Her voice boomed from the speakers, “We mustn’t forget: in 1884, 30 years after the golden cross was placed atop the Berlin Palace, Otto von Bismarck, Germany’s first Chancellor, organised the Congo Conference, where European rulers formalised centuries of exploitation and oppression of the African continent and the people living there. It is our duty to ensure this never happens again. “Bafta Sarbo, a well-known Marxist anti-racist activist from Frankfurt/Berlin, was the last person to speak at the rally.

The event is over. Many of the activists from all over Germany who spoke that day, the panel discussions and performances stressed one crucial question: Who and how do we remember? A simple question which, if treated honestly, sparks incredible change. Remember not the oppressors but the people who fought against them.

Activists who want to change the way we as a society think about the past, about art and culture meet a great deal of resistance. The public-private partnerships that finance the construction of monuments, like that of the Humboldt Forum, are often the ones driving that resistance. Neoliberal global-city ambitions form an alliance with conservative, nationalistic, colonial aesthetics. But why? Who benefits from history celebrating the oppressors?

As capitalist interests hold firm to the status quo, activists and organisers ought to think of Walter Benjamin, a German Jewish philosopher, for guidance on our struggles over memory and the inevitable victors: “And all rulers are the heirs of those who conquered before them. Hence, empathy with the victor invariably benefits the rulers. (…) There is no document of civilisation which is not at the same time a document of barbarism. And just as such a document is not free of barbarism, barbarism taints also the manner in which it was transmitted from one owner to another” he writes in his famous Theses on the Concept of History. It is therefore still our task, Benjamin concludes, to “rub history against the grain.”

So, why don’t we remember Josef Bilé, Berlin’s Black Communist who was the second speaker at an anti-colonialist demonstration in 1929 at Alexanderplatz in Berlin? The activist from Douala, Cameroun was enthusiastically greeted by the public. We remember Willi Münzenberg, a German communist from Erfurt who connected French Sudanese radical Tiemoko Garan Kouyaté with W.E.B. DuBois and Marcus Garvey. We remember Martin Dibobe, a black socialist who organised Africans in 1919 to fight for equal rights.

We remember those who came before us and ask: Who are the people who have made Berlin's reputation? Who are the people who have shaped Berlin? Who is behind Berlin's cosmopolitan reputation? Who has built Berlin's streets? Who is fighting for cosmopolitanism, the free spaces Berlin is now advertising? It’s people like Tahir Della, Mnyaka Sururu Mboro, Simone Dede Ayivi and Bafta Sarbo. Thinking of them now, more than a month later, we must also think of a phrase one activist said to us during the rally: "If we are the ones who build the streets and houses, then we should also be the ones who decide what things are called, what they look like and what they stand for."