An interview with Ethan Earle

Recent weeks have seen massive protests across France, bringing to a close a year that was turbulent even by French political standards. In this interview, Season in Hell editor Ethan Earle discusses Islamophobia and anti-racism, the growing powers of the security state and the rising voices of people in the streets.

Alexandra Spaeth: There have been protests and unrest across France in recent weeks. Can you tell us what they are about, and who is taking part in them?

Ethan Earle: On 24 November, France’s National Assembly passed a bill granting a host of new surveillance powers for law enforcement while also banning citizens from posting videos of the police. Under this legislation, any image that is judged to harm a police officer’s “physical or mental integrity” can be punished by up to a year in prison and a 45 000 euro fine.

The response to this proposed legislation has been one of overwhelming condemnation. Le Monde’s editorial board (hardly a pillar of the left) excoriated the decision, as did the editorial board of Macron’s much loved centre-right Financial Times. Journalists from across the ideological spectrum came together with other critics of this incredibly authoritarian piece of legislation for massive protests throughout the country in the following days. Within a week, the law had been withdrawn from consideration by the Senate in order to undergo review. However, it is still very much lurking in the back corridors of Macron’s administration, and we should expect to see it again soon in a revised form.

The background to this bill is a rising national debate on police brutality brought to the fore during massive anti-racist protests over the summer, organized largely in response to police violence against young Black men. Swirling around this are the recent terrorist attacks and Macron’s heavy-handed response to them. In the case of the proposed law enforcement bill, we again see Macron attempting to employ increasingly authoritarian measures. So it is both the bill and, more broadly, this authoritarian turn that so many people are right now rising up against.

AS: You mentioned the recent terrorist attacks. What happened, and can you tell us more about Macron’s and the French government’s response?

EE: In late September, a trial began to judge a presumed accomplice to the Charlie Hebdo terrorist attack of 2015, when two gunmen killed twelve and wounded eleven at the office of the popular satirical newspaper to avenge its publication of a caricature of the Prophet Mohammed. At the trial’s outset, Charlie Hebdo republished the image and, in response, Al-Qaeda issued an open call for further retributory attacks. Within a few days, a young man wounded two people with a knife outside of Charlie Hebdo’s former office and then, on 16 October, schoolteacher Samuel Paty was gruesomely beheaded outside his high school as revenge for having shown the cartoon in class.

Shortly after, Macron gave a major speech in which he vowed to defeat “Islamist separatism” while strengthening French secularism. He spoke of radical Islam as both an “ideology and a project” intended to indoctrinate children and undermine France’s core values. As part of this speech, he promised to eradicate the supposed influence of Islamism in public institutions, which he claimed government failures had allowed to spread unchecked (almost as if this Islamism were a virus).

This past Wednesday, the 9th of December, Macron unveiled draft legislation for a so-called “law of freedom”. Framed by Prime Minister Jean Castex as an “emancipation against religious fundamentalism”, the bill would require community associations to sign declarations of allegiance to the “values of the republic” while imposing new limitations on their funding sources. It would also prohibit home-schooling and introduce a raft of other measures that Macron claims would combat radical Islamism as well as religious extremism of all forms. However, accompanying comments from cabinet members, for example expressing outrage about Halal aisles in supermarkets, suggest against France’s Muslims, who make up around 8% of the country’s population.

So while the law enforcement bill was the spark that lit this latest round of unrest, it mixes together with ongoing protest against police violence and institutional racism, as well as a government that many believe is increasingly catering to Islamophobic sentiments. Macron aggressively defends Charlie Hebdo and the freedom of expression against Islamic extremists, but tramples on these same freedoms when it comes to public oversight of police violence. This hypocrisy itself drives much of the anger we see right now.

AS: You have referred to this as an “authoritarian turn” taken by Macron. Perhaps you could expand on that? What are Macron’s political goals with these new legislative proposals? More power for the police, more bans on demonstrators… How far to the right is Macron, and France, moving?

EE: We saw a clear shift to the right in Macron’s cabinet shuffle following his party’s poor showing in the June 2020 municipal elections. The clearest such indicator was the appointment of Gérald Darmanin as Minister of the Interior. A hard-line enforcer coming from the French Prefecture, Darmanin has been credibly accused of rape and has readily admitted to exchanging legal favors for sex (which he claims was a consensual arrangement). Macron thus signaled his support both for the law-and-order right and for men aggrieved by #balancetonporc (France’s #metoo) and related feminist movements. Meanwhile, Darmanin has made clear that he intends to focus on the country’s growing insecurity, despite official data that shows steadily declining crime rates across the country. In doing so, he has repeatedly invoked the far-right concept of the ensauvagement, or “turning savage”, of France, which has long been used as thinly coded language to target France’s Black, Brown and otherwise racialized immigrant communities.

These pieces of legislation, and their accompanying rhetoric, signal the next stage in this rightward movement. The shift is, at least in part, a tactical move. Macron regards far right politician Marine Le Pen as his most credible challenger ahead of the Spring 2022 presidential election, a view which is backed up by most polling. Since the cabinet shuffle, Macron has become increasingly preoccupied with shoring up the right wing of his coalition and staving off defections to Le Pen’s camp on the basis of her siren songs for increased law and order, which themselves are accompanied by dog whistles of anti-immigrant, and particularly anti-Muslim, sentiment. It would appear that he is thus attempting to run a repeat of his 2017 victory: capture the majority of the right-wing vote as early as possible, force a second round run-off with Le Pen, and then tack left (in rhetoric), emphasizing his liberal, pro-EU, Enlightenment-infused side and winning on the backs of people who vote for him simply to keep the far right out of power.

However, I believe that there is also something else at play here. Before becoming president, Macron had never held elected office. He was by most accounts a brilliant technocrat and a charismatic figure, but he had very limited experience with the art of doing politics. His “neither left nor right” 2017 campaign mantra, while successful at the polls, subsequently begged the question: What, then, are you for? And to this, Macron has had little answer, nor does he have a strong basis or aptitude for building consensus. With his approval ratings permanently mired in the thirties, and the unruly masses unwilling to concede when he makes his regular concessions to the right, Macron has increasingly adopted an authoritarian outlook on what it means to govern France. I would argue that we saw this shift begin back in late 2018 and early 2019, in response to the Yellow Vest uprising. But Macron also draws on a much longer history in French politics which successfully leapfrogged the French Revolution through the figures of Louis XIV and Napoleon, and which persists to this day in the collective political imaginary. To those unruly masses, Macron now attempts to respond: I am the decider. I am your Sun King.

AS: What then of those “unruly masses”? And where is the left in countering this right-wing shift? Is a 2022 Macron victory over Le Pen the most we can hope for?

EE: 2020 has been marked by unusual levels of protest in France. The shadow of the Yellow Vest uprising stretched forward into the first days of the year, even with few gilets jaunes still physically occupying roundabouts. Shortly after, there were massive protests against a proposed pension reform (pieces of which have since been shoved through under the cover of Covid). Then, throughout the summer,  tens of thousands of people shocked the French political establishment with sustained protest against racism and police violence. And now we see the movements against Macron’s recent pro-police and anti-Islam legislation. This level of multiform protest is unusual, even by French standards, and it portends well for those who believe in the power of the people to impose themselves in the political process. How this street power might find voice in a left electoral project is another matter.

Jean-Luc Mélenchon has already declared his candidacy for the 2022 presidential election. After having narrowly lost in the first round in 2017, Mélenchon has spent several years riding alternately turbulent and lackluster political waves and now finds himself polling around 15 points behind each of Macron and Le Pen. He remains the most popular figure on the left, but his polarizing leadership style and go-it-alone attitude have damaged hopes for a broader left alliance. Just behind him in the polls is EELV/The Greens leader Yannick Jadot, while Mayor of Paris Anne Hidalgo, in spite of not yet having indicated that she would run,  has been tapped by many as the Socialist Party’s most likely candidate. For various reasons, it is highly unlikely that these three would find common ground to form a popular front, nor do they collectively capture the breadth of spirit on the balkanized French left, let alone speak to a majority of those people who have taken to the streets this year to voice their discontent with politics as usual.

In 2017, Macron materialized out of nowhere to win an election in a fractured electoral landscape. That landscape remains in disarray, with the old two-party-dominated system broken and a new balance yet to have emerged. Here we find the left’s second-greatest hope, that it might still conjure something out of nothing. After all, a year is a long time in politics. However, at this juncture the most likely outcome in 2022 is for an unpopular President Macron to narrowly win re-election over Le Pen, relying on people who step into the voter’s booth, hold their nose, and cast another vote against fascism.

But the period from now until then will not be easy for the Macron government. His right-ward, authoritarian shift has been noticed by the people, who are making up for their lack of representation in electoral politics with militancy in the streets. And here, at least for the moment, we find the left’s greatest hope. Hundreds of thousands of activists have been born, organized, and radicalized over the course of 2020. People are increasingly standing up to say no to racism, no to security state overreach, no to never-ending austerity. The streets are a great teacher, and it appears likely that 2021 will continue to provide opportunities for a new generation to find its voice and discover its power.

In dark political moments, there can be a tendency to desperately place hopes in the future, in the youth, in those who have just recently joined arms in struggle. The days are undoubtedly short in this particular “Season in Hell” in French politics, but it is no desperate stretch to see the thousands of lights illuminating the streets this winter, and to believe that it is from these protests that the next left political project can, and must, be born. 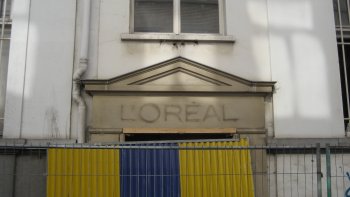 Corporate Welfare in a Time of Pandemic