A Different Government is Possible! Beyond the Centre-left Governments in Europe

"The centre-left governments of the last ten or fifteen years were by and large governments based on neo-liberalism and financial market capitalism. To some extent, they tried to soften its effects – and were thus the “lesser evil” – or they endeavoured to slow down the policy of neo-liberalism. To some extent however, they became the virtual engines of the perfection of financial market capitalism. It was precisely then that they (1) inevitably undermined their own social base; (2) carried out projects which were in fundamental contradiction to the values of equality and social justice, as well as, often, of peace; and (3) split the left deeply and durably.

To the extent that the third act of the crisis is ripening, and that it is becoming inevitable that the course be set, the possibility of a new and different type of government is also becoming possible – a left government. It should contribute to starting on the way to a really politics of social solidarity, ecology and peace, based on a different economic, social and societal policy. The contours of such a politics are getting ever clearer.

The forces of the fragmented left must make up their minds: Are they convinced that a different politics is really possible? Do they have the courage to back a true change of direction? Are they ready to do everything necessary to ensure that the social and political alliances required for that purpose can be forged? Do they have the determination to themselves pay the price for such alliances, and not to overtax partners? Can they find a basis for cooperation beyond the “lowest common denominator”? After twenty years of an unbridled, destructive financial market capitalism, now is the time: Hic Rhodus, hic salta! ..." 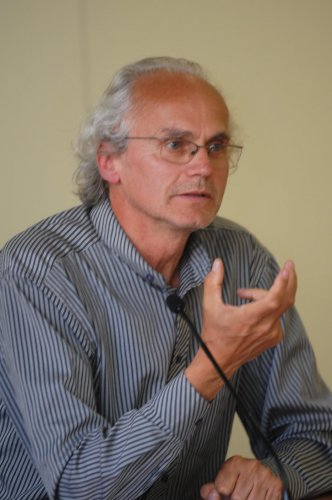