The European Left and the Green New Deal 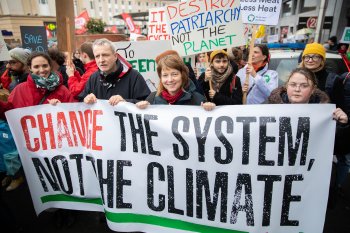 The COVID-19 pandemic is currently dominating our lives in every respect. Public discussion revolves around the pandemic and how to deal with it, which is understandable given its huge economic and social impact. Yet we are not just dealing with the effects of the pandemic; we are seeing very far-reaching structural changes in the social production process, too. These are primarily related to environmental challenges, especially climate change. Production based on fossil fuels no longer has a future. At the same time, the contradictions inherent in the capitalist mode of production are becoming ever clearer. The various concepts behind the Green New Deal are intended to counter both these contradictions and, above all, the environmental challenges we are facing.

There has long been extensive debate around the Green New Deal. Take the book by Naomi Klein (1), for instance, which helped considerably in raising awareness of such a concept. There is also frequent talk of the need for a socio-ecological industrial revolution, which is a move in the same direction. The Green New Deal also played an important role in the US presidential election campaign, being promoted in particular by democratic socialists and left-wing Democrats, most notably Alexandria Ocasio-Cortez. However, with Bernie Sanders withdrawing from the race and Joe Biden winning the Democratic nomination, the concept faded into the background, though it will continue to be central to the political engagement of socialists and left-wing Democrats. In contrast, I will be focusing on Europe, and the European Left in particular, here.

Almost everyone in Europe is talking about the need for a Green New Deal or "socio-ecological transformation", too. However, there are a number of very different underlying concepts. The European Commission, for example, has launched a "European Green Deal" intended to make the European Union climate-neutral by 2050. Key components of this Deal comprise investment in environmentally-friendly technologies, the decarbonisation of energy, the energy renovation of buildings, and cleaner, healthier private and public transport. The EU as a whole should shift towards a green economy. At least €100 billion has been earmarked for this purpose for the period 2021-2027. The Recovery Fund recently adopted in connection with the fight against pandemics should also serve this aim. There is justified criticism that these plans are insufficient and that the climate goals must be achieved sooner. Above all, however, there are concerns that the European Commission will remain biased in its neoliberal dogma. Although some elements of austerity, such as the Stability and Growth Pact, have indeed been suspended, they have not really been abandoned and it is obvious that the European Commission and member governments want to return to the previous policies.

The Green New Deal campaign launched by DiEM25 in April 2019 offers another European, rather ambitious concept. This is an international campaign striving to create a sustainable and future-oriented Europe. It is built on the idea that with the resources we already have at our disposal, the vision of a world free of war, poverty and inequality is achievable, in which public assets such as housing, health care and education are sufficiently available to all. A "Roadmap for Europe's Socio-Ecological Transition" was devised, containing a comprehensive investment plan for a just, equal and democratic economy. The campaign, which is primarily directed at citizens but also targets political parties and trade unions, sees itself as part of the global struggle for climate justice (2).

The Left in the European Parliament (GUE/NGL) has also developed "Towards a Green & Social New Deal for Europe", a tangible proposal based on the Paris Agreement, which strives to limit global warming to 1.5 °C. It calls for a change in energy policy with the expansion of renewable energies, an environmentally sound agricultural policy, a massive reduction in emissions and an industrial and economic policy wholly based on sustainability. The proposal primarily focuses on the protection of workers and employees and better working and living conditions. The Green Deal is also seen as an opportunity for fair and equitable international trade. It calls for a fundamental change in policy whereby people and sustainability take precedence over profit (3).

The UK's Labour Party has probably put forward the most developed concept for a Green New Deal. The Labour Party Manifesto 2019 called for a green industrial revolution to create one million jobs in the UK. Industry, energy, transport, agriculture and even the construction sector would be transformed to align production with nature. Emissions would be significantly reduced by 2030. The economy would be reshaped to serve the interests of the many, not the few. The concept both calls for investment in an ecological transformation and raises the question of ownership. The needs of the people and the preservation of the planet, not profit, would be the top key performance indicators. Above all, the concept sees energy and water as public assets accessible to all. Public assets should be used to guarantee decent work and equal rights for everyone (4).

Bernd Riexinger, co-chair of Germany's DIE LINKE, has also created "System Change", a comprehensive appeal for a left-wing Green New Deal. This concept focuses on social infrastructure geared towards the common good, proposals for meaningful work with decent pay and a reduction in working hours, and a socio-ecological mobility transition, which is seen as the first step towards a wide-ranging social transformation and thus a left-wing Green New Deal. It also raises the question of ownership, encouraging other forms such as public and employee ownership. In particular, the leftist Green New Deal is linked to economic, democratic concepts such as regional social and economic councils (5).

Riexinger's concept of a left-wing Green New Deal ("System Change") that transcends the limits of capitalist development and the Labour Party Manifesto share many similarities in their conceptual direction. All in all, they strive for a radical restructuring of the economy that takes ecological and social requirements into account equally. The neoliberal model of social and economic development must be vanquished.

These proposals, and especially the concept of a green industrial revolution developed by the Labour Party, are important points of reference for the European Left. The socio-ecological transformation, or the Green New Deal, is a key component of the European Left's political strategy. The political document adopted at the Malaga Congress in December 2019 already emphasised the necessity of a socio-ecological transformation. For example, one of its objectives is a 70% reduction of CO2 emissions by 2030, so that climate neutrality is achieved by 2050, in accordance with the Paris Agreement. Industrial production must be reconsidered, becoming resource-efficient, free of fossil fuels, and serving the needs of people. Production needs to be reorganised if we are to combat the climate crisis. Public investment programmes focused on the environment and job creation are required. Democratic control is crucial in order to prevent a purely capitalist modernisation that is barely green at all. A left-wing Green New Deal must be a comprehensive concept geared towards the common good. We need public investment in infrastructure, social services such as health care, affordable housing, education and culture. A fair tax policy with higher taxation of the rich and the wealthy is necessary in order to finance these vital investments.

For the left, the combination of ecological and social needs is essential. There is no doubt that a green industrial revolution, as the Labour Manifesto calls it, is necessary. But equally, workers affected by these changes must be protected. "Just Transition", as promoted by the ITUC, is a concept that combines ecological transformation with social protection and aims to ensure that a green economy can provide decent work. A left-wing Green New Deal must go hand in hand with the expansion of workers' rights. This can be linked to the pillar of social rights as adopted by the European Commission. However, it must not remain a non-binding intention. Rather, these social rights must be binding - for example, in a binding "Social Protocol", as demanded by the Trade Unionists Network Europe (TUNE) and also championed by the ETUC.

Workers must not only see their rights strengthened in this transformation process; they must also be directly involved. Their direct involvement is indispensable for a left-wing Green New Deal. From a leftist perspective, therefore, the connection of the Green New Deal with economic democracy is paramount. This also distinguishes it from other concepts.

A Left Green New Deal is a core component of the European Left's political strategy. It must be understood as a comprehensive transformation concept that combines ecological and social requirements and ensures the direct involvement of the workers themselves. It breaks with neoliberal European policy and also goes beyond the limits of capitalist development. However, rather than being a ready-made concept, this requires both intensive internal and external discussion.

In addition to further conceptual development, however, it is also primarily a matter of social dissemination, so that the left-wing Green New Deal also becomes politically effective. Though social upheaval does pose risks, as seen in the increase in nationalism, racism, authoritarian politics and the rise of the extreme right, it also opens up opportunities for a different, alternative form of politics, which is what the "Green New Deal" stands for. The left must seize this opportunity and become its champion. The Green New Deal must become a focal point of cooperation with other left and progressive forces, especially social movements such as "Fridays for Future" and, above all, the trade unions. European trade unions, especially IndustriAll, the European umbrella organisation of industrial trade unions, are becoming increasingly aware of the need for a green industrial transformation. For them, the combination of ecological and social requirements is absolutely pivotal. This provides a sound basis for cooperation with the European Left.