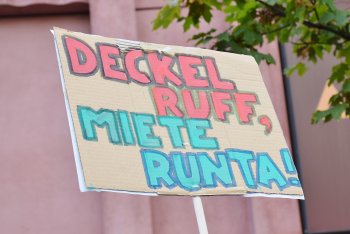 Demonstration for the right to housing in Berlin

The ruling on 15 April 2021 by Germany's Federal Constitutional Court on the rent cap imposed by the Berlin state government is a major blow for the city's Senate, and especially of course for the many Berlin tenants affected. It will also, naturally, have a very sobering effect outside Berlin and Germany, on initiatives, parties and progressive city governments that looked to the flagship Berlin project as a model to be implemented in other European cities. In Berlin as in Paris, Munich, Barcelona, Hamburg, Copenhagen, Dublin, Madrid, London and many other cities, rents are rising, the cost of decent housing is driving more and more people into poverty, and displacement processes are accelerating. In these and countless other cities, there is a demand for the very solution recently attempted in Berlin, namely state regulation aimed at stopping, or at least slowing down, displacement and making a real contribution to ensuring decent, affordable housing.

But as great as the disillusionment and disappointment after the court's ruling may now be, neither the subject nor the demand are off the table. On the contrary, this issue is one of the biggest and most glaring political challenges facing major European cities. Moreover, a closer look at the Constitutional Court judgment shows that it does not spell the inevitable end for the kind of approach the rent cap represented. In its decision, the court did not say that a cap on rents, as adopted in Berlin, was in itself unconstitutional. Rather, it found that this issue was already regulated by federal law. Consequently, according to the court, the State of Berlin no longer had the right to enact its own, more extensive legislation. In other words, the question was whether the State of Berlin had the competence to act as it did, and the court held that it did not.

It was already clear when Berlin's rent cap was introduced over a year ago that this problem might arise. Indeed, the Berlin Senate itself had indicated this in advance. The rent cap was what the Senate, controlled by a red-red-green coalition of Social Democrats (SPD), DIE LINKE (The Left) and Greens, was able and willing to do to address the issue, even if it now transpires that this measure was not within its powers. That is highly regrettable. All the same, introducing and implementing the rent cap was unquestionably the right thing to do. It remains the flagship project, far beyond Berlin, for a progressive and resolute social policy that at least attempted to correct an unprecedented adverse trend in European cities – a project that, at long last, challenged the primacy of the market, which is good for nothing in this respect except generating profits. The rent cap project retains that flagship status. Germany's federal government could also see the court ruling as a mandate to act. There are two simple ways it could implement, or enable, a socially responsible housing policy. It could, of course, enact a rent cap for selected cities or regions itself, but it could also enable the states to act on the basis of state laws by incorporating a flexibility clause into federal legislation. Then the rent cap would be back on track.

It goes without saying that this would not be possible under a federal government that includes the centre-right CDU/CSU or even the liberal, market-oriented Free Democratic Party (FDP). A socially progressive housing policy would be just as unachievable with a black-green coalition of CDU/CSU and Greens as with a traffic-light coalition of Greens, SPD and Liberals. Naturally, another Grand Coalition of CDU/CSU and SPD would also make it a non-starter. This should be quite clear to anyone with an interest in rent control who plans to vote in the September 2021 election to the German federal parliament (Bundestag).

The fight against displacement and for decent, socially responsible housing will undoubtedly continue. This is one of those areas in which the contradiction between market forces and effects and the interests of the vast majority of the population becomes immediately and clearly apparent. Few measures or laws introduced by the Berlin state government have met with such broad approval in the city, and none have had such a direct and appreciable positive impact on such large swathes of the population as the rent cap.

And if the debate continues, in Berlin, in Germany and across Europe, it will also become clear that the rent cap was not, and is not, the only means of weakening or breaking the profit-based rationale. In Berlin, the fight to expropriate the major housing company Deutsche Wohnen goes on, with campaigners seeking to hold a referendum on this in September 2021. The prospects for this plan are not looking too bad. Finally, it goes without saying that Berlin and its rent cap are not the only game in town. In Lisbon, Barcelona and numerous other European cities, there have been successes, but also definitely setbacks. And while the Constitutional Court ruling is a setback, it is certainly not the end of the story.