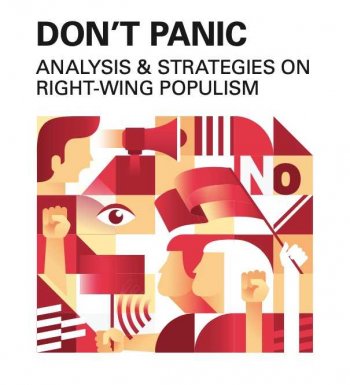 The past ten years have seen a rise and consolidation in the support for right-wing populist movements and parties in Germany, Sweden, and Denmark. This is reflected increasingly in parliaments and governments alike. This poses a series of challenges to the parties of the Left and in broader terms to central values in liberal democracy.

For the past two years, the Democracy in Europe Organisation (DEO), based in Copenhagen, has teamed up with the Rosa-Luxemburg-Stiftung Brussels Office (RLS) on a joint project to address the rise of the populist right and the future of European Democracy. This collaboration brought together the political Left in Germany, Sweden, and Denmark for a number of workshops and has now culminated in the publication of the new anthology “Don’t Panic – Analysis and Strategy on Right-Wing Populism”.

This anthology presents three examinations of the developments in far-right populism, three analyses of the strategies and tactics deployed by the Left to counter far-right influence, and three visions for building a stronger Left.

The Democracy in Europe Organisation (DEO) is a liberal adult education organisation working to promote a participatory European democracy. DEO strives to engage the general public in a nuanced debate on European politics and on the European union. Following a participatory democratic mind-set, our aim is to activate as many as possible in a versatile and open debate about the content and framework of the European Union.