The European Fit for 55 climate package: inadequate and socially unbalanced 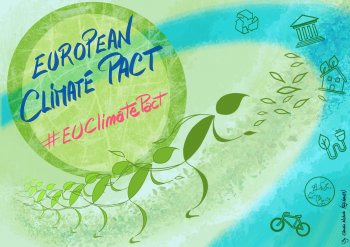 All in all, Fit for 55 can be considered a bit of a mixed bag: though it does take some steps in the right direction, some aspects urgently need to be improved to guarantee strong climate protection and social justice.

Starting with the most obvious observation: unfortunately, Fit for 55 does not raise the EU climate protection target of reducing net greenhouse gas emissions by 55 percent by 2030. Even this agreed percentage will not be enough to limit any temperature rise in the EU to 1.5 °C, as set out in the Paris climate agreement. The scientific community is in agreement that the EU should aim to cut emissions by at least 65 percent, if not 70 percent. Fit for 55 also raises the proposed European targets regarding increasing the share of renewables in the energy mix from 32 percent to 40 percent (luckily) by 2030 but unfortunately this is not enough to comply with the Paris climate agreement, as renewables need to account for at least 50 percent of Europe's energy mix to secure our economy's socio-ecological transformation. Though welcome, the plans to convert the European steel industry to climate-friendly green hydrogen alone requires renewables to account for a much greater share of the energy mix in order to be able to produce sufficient green hydrogen. Unfortunately, in Fit for 55 the European Commission also failed to propose nationally binding expansion targets for renewables; this would make perfect sense if Member States are to be compelled to make a stronger commitment to European targets.

The European Commission's proposal to increase the CO₂ limit values for cars and light commercial vehicles and to virtually phase out internal combustion engines by 2035 is somewhat positive. However, it would have been much better to propose a clear CO₂ cap for these vehicles that would come into force as soon as possible, not just from 2030. An earlier phase-out of internal combustion engines (i.e. from 2030 onwards) would also have been key, because the transport sector is the only sector in which emissions have been on the rise in recent years and which urgently needs to be restructured to secure a socially just mobility transition. It must also be clear that the construction of small, efficient electric cars must be prioritised in order to solve land justice issues in our cities (traffic jams, parking spaces) and to reduce the consumption of raw materials (steel, lithium, nickel, etc.) for cars. Of course, the needs of those working in the European automotive industry must not be forgotten. Here we need a just transition that guarantees decent work and collective bargaining coverage, further training and the involvement of trade unions in shaping the transformation.

Fit for 55 unfortunately fails to assign any role to the necessary expansion of rail transport, also across borders, and of public transport (even though 2021 is the European Year of Rail). This is all the more unfortunate as such a move could substantially cut greenhouse gas emissions and create thousands of jobs in the manufacturing of infrastructure, rail vehicles and vehicles for public transport. This would equate to 200,000 jobs in the next decade in ride-hailing services and in maintenance for transport companies, plus a further 200,000 jobs through federal government investment in rail infrastructure and local public transport in Germany alone. DIE LINKE has launched an initiative promoting a climate-friendly economy and decent jobs (read more here (in German)). France is home to similar initiatives. Un Million D’Emplois pour le Climat (literally: one million jobs for the climate) calculates in detail how the necessary socio-ecological transformation could create thousands of jobs. Rail connections between European cities have been cut in recent years and must be restored, alongside a comprehensive, reliable European night train system. Uniform parameters for rail connections would also have to be established at European level to promote cross-border expansion.

The volume of traffic must be reduced not only on the roads, for example by transporting freight by rail, but also in the air. So while it is to be welcomed that the European Commission is finally proposing a kerosene tax for flights within Europe in its Fit for 55 package, cargo flights are exempt. This is, of course, completely counterproductive. At present, the lack of a kerosene tax costs the EU Member States around €27 billion every year – money that could be used to further the socio-ecological transformation.

Fit for 55's proposal to subject the transport and heating sectors to emissions trading must be evaluated critically. Such a step means that CO₂ prices will also be introduced in these sectors throughout the EU and that prices will rise. For one thing, this is unfair, as energy-intensive industries in the EU will continue to receive free CO₂ certificates and thus essentially be relieved of their CO₂ prices. Furthermore, purchasing power varies greatly between Member States, so the impact of a uniform CO₂ price on local people will also vary considerably. There is a threat of social injustice and further financial burdens for citizens. Although the European Commission's proposal includes a social compensation fund (which is far too small) intended to relieve the burden on citizens, it is up to the Member States to decide how to use this fund, so it is unclear whether the money will actually reach local communities. In Germany, for example, tenants alone bear the increased costs brought about by the CO₂ price for fuel oil and gas, even though it is the landlord, not the tenant, who decides which heating system to use. This is socially unjust. The situation is similar in the transport sector: an EU-wide CO₂ price will cause fuel costs to rise, which will be a particular burden on those who depend on cars (commuters) and cannot simply switch to an electric car. What we need here is an expansion of climate-friendly alternatives: comprehensive, reliable public and rail transport.