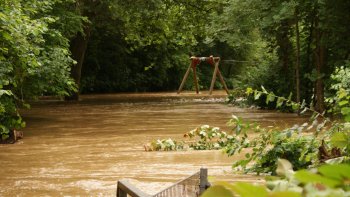 The news over the last few weeks gives us the lasting feeling that the climate crisis has accelerated and we have passed the point of no return. The flow of catastrophic footage started with the extremely unusual heatwave and wildfires in Canada and continued with the massive floods in Belgium and Germany. While Angela Merkel, who has been the German Chancellor for the last 15 years, described the destruction in Germany as “surreal”, these events are all too real and will stay in people’s minds for a long time to come.

Meanwhile, the European Commission is unveiling its big plan for the decarbonisation of the continent. While it claims that lessons have been learnt, it seems that the path taken is not steep enough to save the climate or to transform our economies in a just way, bearing in mind the risk of continued climate destruction and social backlash.

Climate change is hitting us in Europe faster and more powerfully than scientists were expecting. The destruction of the environment and human lives has become strikingly apparent to people in the West, where it is already a reality. We are entering a time of destruction and large-scale catastrophes.

What was already happening in the Global South, with huge floods, permanent droughts and desertification, causing 40 million people to be internally displaced in 2020, has been experienced in a very short time in the Global North and in Europe. The extreme heat in Canada and the resulting fires were followed by rarely seen destructive floods in Belgium and western parts of Germany.

This time it was not only huge material or natural destruction, such as Europe has often experienced: hundreds of people lost their lives. A town in Germany was pretty much wiped off the map while fires burnt down an entire city in Canada. Recently, footage of the iconic London Tube totally flooded came hot on the heels of utterly harrowing images of an underground system in China, with thousands of people, including children and babies, stuck underground, desperately trying to escape the rising water. Those footages instantly replaced the same catastrophic scenes coming from the streets of Japan.

One thing that these highly destructive events have in common was highlighted in a recent article on the Belgian floods, namely the fact that the people most affected are lower classes including a large number of migrants, inhabiting poorly maintained buildings and leftbehind neighbourhoods. The same people that were in the front line during the pandemic are now seeing their houses and neighbourhoods destroyed, victims of a phenomenon to which they have contributed the least, compared with the top 1% and with large corporations that have mainly driven this crisis.

As the climate crisis accelerates, making its impact more tangible for us in the West, we need to look at the response of political institutions, especially at the time of the highly geopolitical race for decarbonisation, with the claimed leadership of the European Union.

And to say that nothing is happening at the political and legal level would be misleading. In fact, there are major evolutions under way, specifically at the EU level.

Fit for 55 has been the most anticipated legislative package under the Green Deal umbrella since Ursula von der Leyen briefly introduced its name in her State of the Union Address in September last year. It gives, if not the final shape of the Green Deal, a much more detailed picture of the intended “transformation” of the EU towards a decarbonised economy.

This extensive set of directive revisions and new legislation and regulations is the concrete plan for reaching the target that the EU has set itself of reducing greenhouse gas (GHG) emissions by 55 percent by 2030 compared with 1990 levels and achieving net zero by 2050. Although Fit for 55 is very much a cross-cutting package, we can outline the main areas that will be affected by this new initiative:

Surprisingly, when we look at the energy and emissions side, there is no sign of any proposal commensurate with the requested emissions decrease of 65 percent of GHG by 2030. The increase in renewables as a share of overall energy from 32 percent to 40 percent is still insufficient and is not accompanied by binding targets for Member States.

The core of the push lies in the development of the carbon pricing target and the enlargement of the Emissions Trading System (ETS).

This market-based approach sets a price per tonne of emitted carbon while also capping the maximum allowed emissions for industries. While the ETS currently covers around 22 percent of total EU emissions and 11,000 factories, its extension would expand this to around two thirds of EU emissions. Another focus is on raising the average price of CO2 emissions to around €50 per tonne. The low price of CO2 has often been identified by green NGOs and analysts as the main reason for the failure of the ETS, an almost empty shell since its implementation in 2013, while many climate justice groups have strongly criticised such market-based approaches, calling them “false solutions”.

Probably the most criticised decision in the package has been the enlargement of the ETS to include the transport and building sector. The direct effect of this integration will be to penalise poor households by raising the price of basic expenses. It means that tenants living in poorly insulated buildings will see their energy bills rise significantly. The same applies to people who will not be able to switch to an electric vehicle or who happen to live in an area without decent public transport.

The message is quite clear: the lower classes, who contribute the least by their way of living to the climate crisis, will be asked to proportionally contribute the most, at a time when the pandemic has already exacerbated inequalities and drained the resources of the most vulnerable in our societies.

Looking back at the events of this summer, it is hard to imagine that those who have lost their homes and all their belongings in the recent floods should also bear the brunt of the drive to decarbonise the EU economy. While everyone, even at the highest level, mentions the gilet jaunes episode as the scenario that they want to avoid, the right lessons do not seem to have been learnt.

This EU internal carbon pricing mechanism will be accompanied by its external counterpart, the Carbon Border Adjustment Mechanism (CBAM), and here again the discrepancies reveal the true nature of the transition that the Commission is proposing. This mechanism will require importers of industrial products to purchase emissions certificates for a volume corresponding to the CO2 emissions generated by the manufacture of the products they bring into the EU. The CO2 price applied will be that of the European carbon market.

This proposed scheme aims to make sure that EU producers are not disadvantaged compared with producers in other regions that have not started such a decarbonisation process. However, the CBAM, as proposed, has many limitations:

We therefore have a procedure that is making foreign industries pay for their right to pollute while not incentivising the limitation of those emissions within the EU’s borders. This shortcoming, when compared to the extension of the ETS detailed earlier, makes it very hard to believe Franz Timmermans when he claims that “fairness” is actually the main concern of the European Commission with this plan.

The relatively small amount of taxes collected through the CBAM will go towards paying for the NextGenerationEU stimulus plan (thus highlighting the lack of really innovative monetary proposals on that side) rather than promoting the direct decarbonisation of the EU and of low- and middle-income exporting countries that will be hit by the implementation of the CBAM.

Finally, it would be untrue to say that there is no social component to Fit for 55. The last “surprise” of the package was the creation of a Social Climate Fund aimed at counterbalancing the effects of the extended ETS on households.

However, while this fund will be directly based on revenues from the transport and building ETS within Member States, it will receive only 25 percent of those revenues between 2025 and 2032, and will be topped up by Member States’ contributions to the same level, making a total around €140 billion. Of the €72 billion derived from ETS revenue, only half will be direct social support while the rest will be used as financial incentives to buy or develop low-carbon goods and infrastructure. This is completely inadequate to ensure that we are protecting the most vulnerable. For example, €13 million per year needs to be invested in the construction and renovation of social housing alone.

Unfit for the Climate and for Justice

If cutting GHG emissions is left to the market, with a worrying share being shouldered by low-income citizens while large companies and industrial groups are spared additional taxation, it is hard to maintain that the European Commission is proposing a just and fair decarbonisation process that will command backing and support from the majority of citizens in Europe.

The roadmap for the adoption of this package will be long and hard to predict. It looks like Europe is at the door of a historic moment, with the Green Deal alluding to the post-Depression era in the United States. With the COVID-19 pandemic and the economic crisis, we can also draw a comparison with the years after the Second World War in Europe, when everything needed to be built, rethought, rebalanced. The task was immense but social democracies managed to create welfare systems in which social and labour rights occupied a significant place. But they also failed to establish the foundations for another kind of system, leaving the space for the radicalization of capitalist dynamics.

We are very far from being able to imagine such a place for social and workers’ rights in a system that is too slowly transitioning from fossil fuels while extending financiarization to new “assets”: the nature and what should be our “commons”. However, in the past years, the climate movement has been undeniably successful in putting the climate crisis at the centre of media attention and ultimately on the agenda of European politicians.

The missing element is organised worker and social forces strong enough to amplify and strengthen sections of the climate movement’s aspirations towards proper system change and a real just transition. If the Green Deal is a neoliberal co-optation of Green New Deals, it is in itself a recognition of the significant pressure that those demands and plans have placed on the political agenda. The task will be to connect the political and social dots in order to fulfil the duty of our century.