Back together after pandemic

Last weekend of September, people from four corners of Europe and beyond, from Portugal to Israel, gathered in Brussels for the first Beyond Gas Conference since Covid-19 hit our lives.

The conference was both in person and online, allowing us to interact with activists from Japan, USA, Canada, Europe and Africa connected via zoom.

Beyond Gas is a network composed by grassroots movements, NGOs and collectives that want to fight against fossil gas, and be sure that “transition” means real, fair, ecological and social justice oriented transition, and not an empty word to justify keeping on with this fossil fuel model. 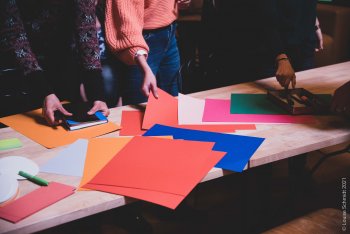 Since the last conference in person two years ago, before the 2020 online one, a lot has changed. Climate crisis hit the mainstream media and became a hot topic in news and politics, and now it’s clear to all that it is the biggest challenge we have to face in as little time as possible.

Fossil gas, along with its cousin Hydrogen, became the main tool of greenwashing for fossil fuel companies and governments to continue to commodify and make large profit over energy production and distribution, instead of investing in real renewable solutions to fight the climate crisis.

Meeting in Brussels allowed us to confront, share experience and find new ways to better face these challenges and strengthen our local work to better support each other. There was a good balance between “Beyond Gas veterans” like Friends of the Earth, Gastivists, Climaximo, Client Earth, CAN Europe, E3G, Urgewald, ECF and new attendants like Europe Beyond Coal, Workshops For All Beings, GasExit and EIA, perfect to both underline what useful originated by past Beyond Gas conferences and have a fresh look on present struggles. In these years we connected our fights and supported each other, shared knowledge and infos, started projects and campaigns like stopeastmed or shared the support of the resistance in Mozambique, and built personal relationships that made fighting gas more fun. We spent some time getting to know each other better, on what and how our organizations or groups work, and how we can connect our struggles.

We decided to focus on energy poverty, hydrogen, gas price rise while paying more attention on Central Eastern Europe, where different fights against new LNG or pipeline projects are starting.

Despite our difficult travel situation we didn’t want to lose the international aspect of our community, so we took time to connect with our allies from outside the EU on a hybrid session  we’ve heard the voices of people based in Ukraine, Senegal, Turkey, Mozambique and Texas, US. 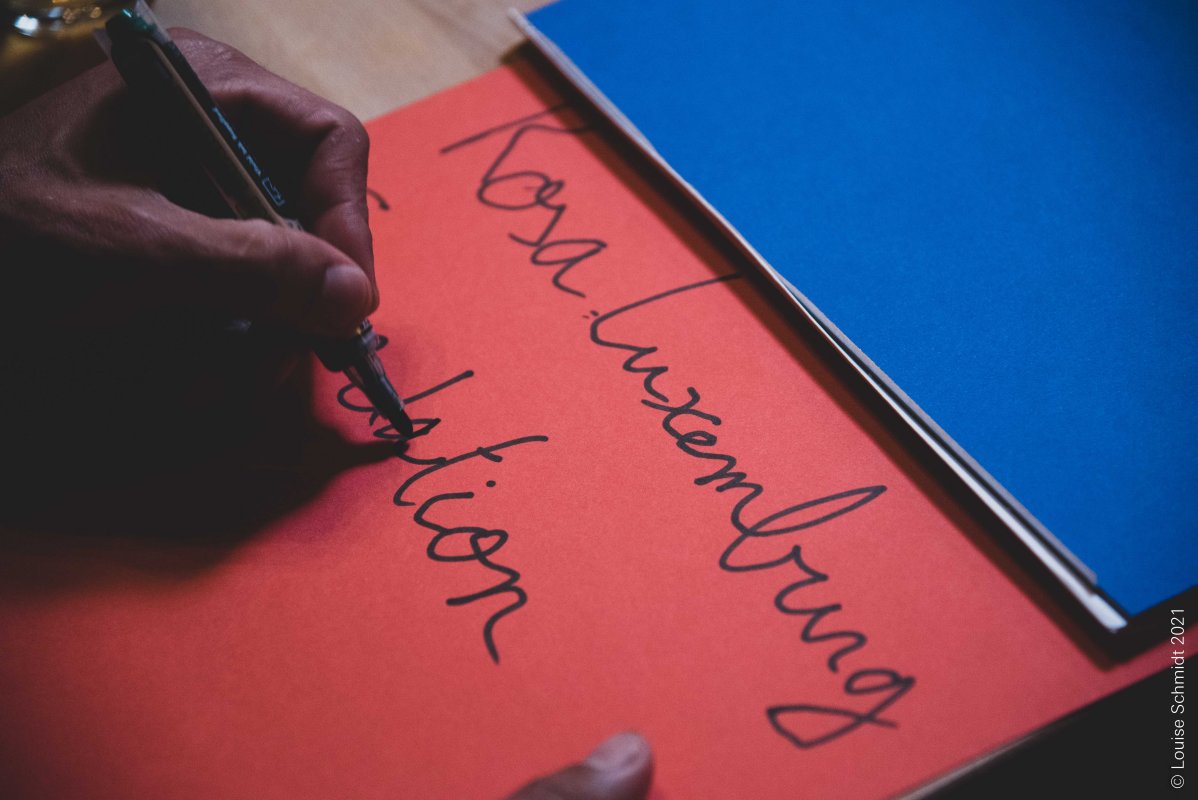 Once again we were reminded that big banks and corporations are the ones fuelling crises affecting most vulnerable communities – such as the people living off fishing in the region of West Africa which, due to the extractivist approach of companies like BP, suffers from loss of biodiversity. What stood out was the topic of the Europe-wide division between the West and East – we had a chance to reflect on Russia and Ukraine’s situation and have seen that along with Poland or Romania, also crucial in the future fight against gas, they require a different approach in terms of narrative and action than Western European countries. We’ve expressed words of support and a hope that soon we’ll be able to meet in person again and work on these pressing issues.

Is difficult to know if there really is less gas storage, as companies say, or if it’s just an excuse to push with new gas projects, nuclear energy or to take down CO2 price. How much is this a created crisis?

This is a very profitable moment for fighting gas, no time to waste. For the first time, energy security is on the table, and NGOs and grassroots movements need to underline how much fossil gas is unreliable, call out governments to take social measures to support who needs it and to switch into renewables to guarantee energy independence.

During the conference we couldn’t miss asking ourselves some very complex and open questions about the decarbonized world, knowing that it’s not only about energy production, but much more – that’s why we’ve had amazing Petr Hlobil and Lenka Ilcikova (Bankwatch CEE) talk us a bit through the issue of district heating. We’ve been reminded that a transition from gas to renewables won’t happen without increasing energy efficiency and presented some solutions (seasonal heat storage, heat pumps or geothermal energy), that aren't however one-fits-all but need to be adapted individually to each country’s situation and potential. And yet that wasn’t the only tricky part of the conference! Later on, we went on the other hot topic of these days: hydrogen. 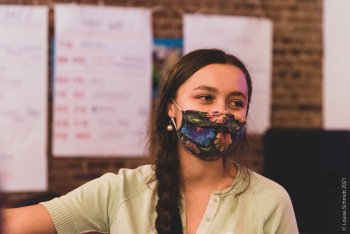 Bob Howarth, professor of Ecology and Environmental Biology at Cornell University, helped us to see through different types of hydrogen (grey, blue and green) and thier environmental impact compared with other fossil fuels. Prof. Howarth cleared our doubts regarding the effective sustainability of hydrogen (spoiler: it’s not) and how much it’s been used by fossil fuel companies as a greenwashing tool, to promote CCS projects around the world for example.

Esther Bollendorff of Climate Action Network Europe showed us the NGOs perspective on hydrogen, what are the main obstacles to deal with (like the Clean Hydrogen Alliance) and what are the only few good uses of green hydrogen, in sectors where reducing emissions is most difficult (industrial and the long way transport sectors).

Pascoe Sabido of Corporate Observatory Europe explained to us the connection between hydrogen interests and fossil fuel companies lobbying in the EU.

In the end, we all agreed that hydrogen is simpler than the fossil fuel companies want us to think, and that is being complicated on purpose to distract mainstream public opinion from the real issue. Our job is to make it easier to understand, and to underline that is not the solution, starting by calling it “fossil hydrogen” instead of “blue hydrogen”.

As a Network, we find it extremely valuable to use the same narrative in order to push the change in the public debate even further. That’s why we also spent some time thinking of creative metaphors and ways of contrasting the gas industry’s narrative that lets them destroy our world with a clean reputation. The workshop, prepared by Kevin from the Gastivists Collective, consisted of presenting 7 top messages against gas (including the issues of heated climate, polluted environment, social justice and gas industry’s corruption) and digging deeper into making a good use out of them. However, we’ve recognized that they are mainly created through a Western-European lens, and it’s just a start to a conversation of how to make them useful to anyone, anywhere in a form of “meta-narrative”.

We reserved some time for having round tables on different issues that came up during the first two days. 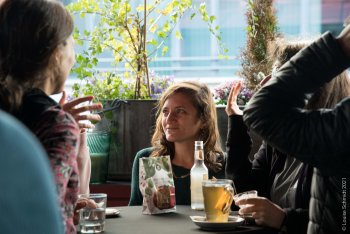 At the end of the third day, Pascoe Sabido and Frida Kieninger of Food and Water Europe took us to have a tour through some sensitive spots regarding the lobby world. Despite the seriousness of the topic, Pascoe was a hilarious entertainer doing quizzes on how much the EU spends on gas (too much) or on how much fossil and gas companies spend on lobbying inside the EU (guess? A lot!).

We started from the European Commission, where he told us basically how laws are made in the EU, what’s the process and when lobbyists come in. Ya’ara from One Climate and Gastivists updated us on how EU projects, in particular the Eastmed-Poseidon pipeline, can affect other countries and contribute to other people’s oppression, like in Palestine. Frida also explained how “lobbying the lobbyist” was in the beginning, when gas was not so mainstream.

Then, we stopped at the Eurogas building, coincidentally shared with British American Tobacco, Unicef, World Food Program and others. Eurogas represents European gas wholesale, retail and distribution (not producers), and their plan is to bring on their side also NGOs, as you can see from the other offices in the building.

Under the rain, in front of the TotalEnergies building, we discussed Total’s strategy to #makethechange reaching Net Zero, another greenwashing tool that involves land grabbing for tree planting (in Republic of Congo, for example). Eilidh from FoEE updated us on young groups working on pushing out polluters from the COP 26th happening in Glasgow. 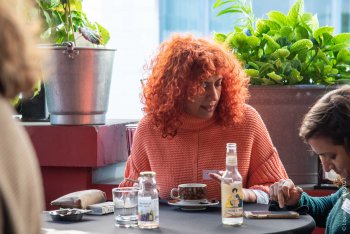 Next stop Fluxys, Belgian gas company and one of biggest in Europe, involved in many big projects for ex TAP. It’s a member of ENTSO-G and many other trade associations, pushing hydrogen to create a ‘hydrogen backbone’ throughout Europe of more pipelines. Ike from TegenGas showed us how they’re greenwashing, saying that Belgium has green municipalities but at the same time they plan new LNG terminals, and they’re involved in gas projects around the world.

Last stop before the bar, the Italian Permanent Representation. Italy is one of the biggest recipients of post covid recovery funds, and the government is spending more than €4.5 billion of EU funds on hydrogen and biomethane, but only €4 billion on improving Intensive Care Units (ICUs) and medical equipment. A report from FFP and ENCO (Hijacking the Recovery Through Hydrogen) shows that the Italian government had at least 100 meetings with the fossil fuels industry in one year about recovery funds, and Italy planned spending on hydrogen quadrupled thanks to the gas industry lobbying for fossil hydrogen with CCS. The EU Commission eventually said no, but Italy has applied to other EU funds to fund it, like the Innovation Fund. Bu from Gastivists Italy also updated us on the level of repression that the NO TAP movement is still facing and on what’s happening in the region today.

Who are we and who do we want to be?

We didn’t want to leave the conference without exciting action points for the future, so we started reflecting on who we are and whether we want to change. The Beyond Gas Network is mainly an email list, the annual conference and bi-monthly calls. We’ve started working groups, we’ve organized days of actions, we’ve done a few campaigns about EU policies. But we still want to learn and grow – that’s why we took some time to try to answer the following questions: 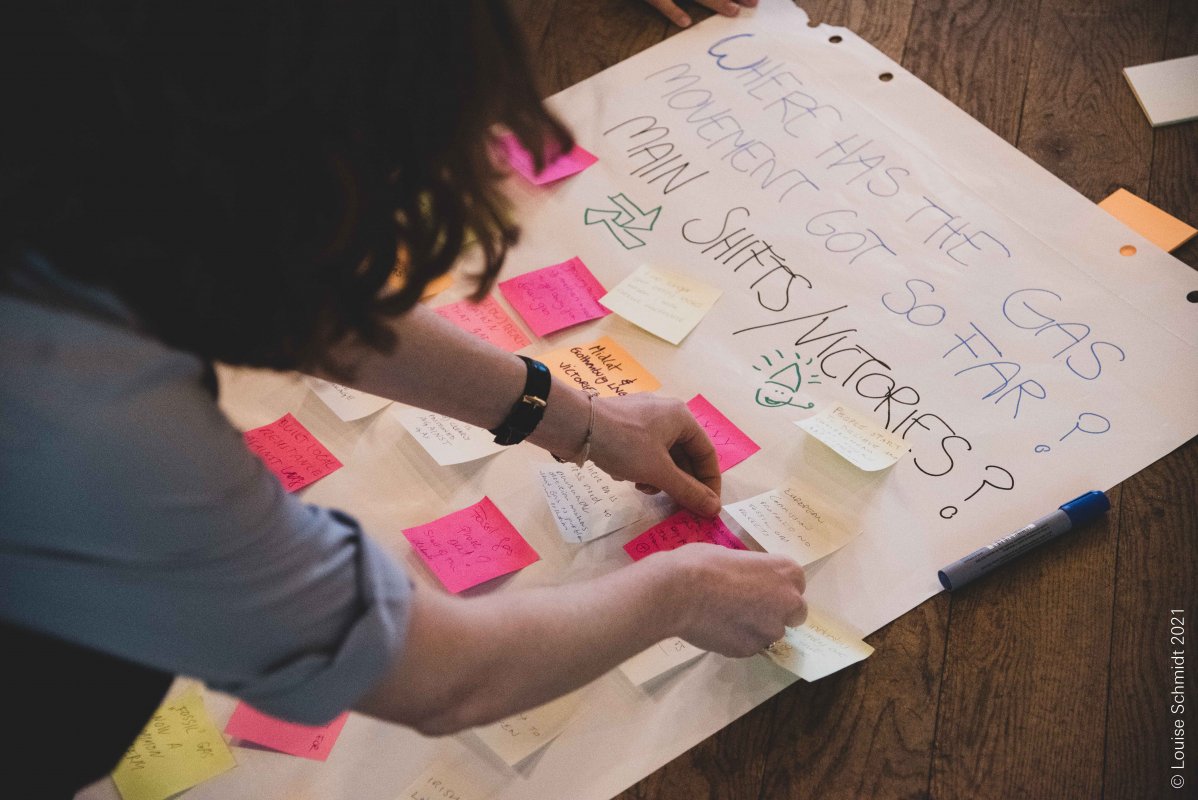 From this session we’ve collected some very important input that’ll shape our work as a Network in the next months. So what exciting things are going to happen? We’ll try to establish a common ground when it comes to our values – do we want to be actively feminist, antifascist, antiracist? Will we have a collective decision on how we feel about nuclear energy of the CCS/U technologies? Maybe we’ll create a group on a platform other than mail to engage in a more active conversation than ever before? And maybe we’ll end up leading another campaign together? One thing is certain – we won’t stop fighting against gas, and whoever is interested in this can and should join us!

More info about the network: www.gastivists.org