It is impossible to determine the number of firearms in circulation in the world, but one thing is certain: there have never been so many! According to recent estimates, there are now more than one billion firearms in existence. And if you consider the number of guns leaving the arsenals each day, this flow is not about to decrease.

European states bear a great share of responsibility for this situation. Weapons made in Europe are used to kill, harm and displace people around the globe. While people lose their lives, their health, their relatives and their homes in armed conflicts, arms-producing companies generate profits. The European arms industry is an opaque sector that violates laws, exerts influence on decision-makers and shirks responsibility.

However, there is insufficient control of the arms trade in Europe, and once a weapon has been exported nobody can guarantee anything. Between the preservation of economic interests and respect for human rights, between commitments made at the international level and the reality in practice, there are gaps and contradictions. Faced with this complexity, GRIP and the Rosa-Luxemburg-Stiftung Brussels Office felt it was important for citizens to discover some of the inner workings of the system, to enable them to better understand and perhaps influence the decisions that the authorities make in this area. This comic book explains the international arms trade, shows what’s wrong with it and offers insights into how we can address this problem. We invite you to immerse yourself in this little-known world of the arms trade... Follow the guide! Benjamin Vokar, a journalist by training, joined the GRIP team in 2013, where he is responsible for communications and publications. A fan of comics, he came up with the idea for this book and wrote the script with the help of GRIP researchers with expertise in arms transfers, trafficking and trading.

Philippe Sadzot, aka Fifi, is an author, cartoonist and press illustrator who publishes fanzines in Liège (Belgium). A visual arts graduate, he studied at the art college ESA Saint-Luc Liège, where he now teaches drawing and cartoon illustration. Fifi has experience in all areas of comic-book production and has been involved in the world of independent comics for over 15 years. He also set up the publishing house poil dans la main, for which he regularly produces personal fanzines as well as silkscreen posters and postcards. You can view his work on his blog fifisadzot.tumblr.com, which he updates regularly.

After training as a cartoonist at ESA Saint-Luc Liège, where he met Fifi, Tomasz plunged headlong into the rough-and-tumble world of the comic strip. He contributed to a number of fanzines before becoming an editor at the comic-book collective Atelier 24, which publishes a high-quality magazine with an emphasis on inclusivity. Now a teacher and a colleague of Fifi, Tomasz expresses himself creatively as a cartoonist, engraver and colourist. You can discover his latest creations on his Instagram account @scraboudjas.

Thanks also go to Quentin Carez, who worked on the final pages of the comic during his time as an intern.His work can be found on his Instagram account @goot_of_the_rain.

The Rosa-Luxemburg-Stiftung is an internationally operating, left-wing non-profit organisation providing civic education. It is affiliated with Germany’s ‘Die Linke’ (Left Party). Active since 1990, the foundation has been committed to the analysis of social and political processes and developments worldwide. The Stiftung works in the context of the growing multiple crises facing our current political and economic system. In cooperation with other progressive organisations around the globe, the Stiftung focuses on democratic and social participation, the empowerment of disadvantaged groups, and alternative economic and social development. The Stiftung’s international activities aim to provide civic education by means of academic analyses, public programmes, and projects conducted together with partner institutions. The Rosa-Luxemburg-Stiftung works towards a more just world and a system based on international solidarity.

The Group for Research and Information on Peace and Security (GRIP) was established in 1979 out of a desire to provide objective and impartial information on issues such as the Cold War, East-West power relations and the balance of terror (missile crisis). In the 1980s, GRIP became particularly well known for its analyses and reports on the arms race. From the 1990s onwards, following the end of the Cold War, GRIP focused its work on broader security issues, acquiring recognised expertise on questions of armament and disarmament (production, transfer control and regulations, non-proliferation), conflict prevention and management (particularly in Africa), and European integration in the field of defence and security. GRIP is an independent research centre, recognised as a continuing education organisation by Belgium’s French Community. The team is made up of around 20 permanent employees, including researchers, publications and communications officers, and administrative and secretarial staff. Its research activities are also supported by a number of associate researchers, both in Belgium and abroad. GRIP is an active member of many international research networks.

Order the comic book for free!

The comic can be ordered in German, English and French and is now available! please indicate in your order in which language you would like to receive the comic. 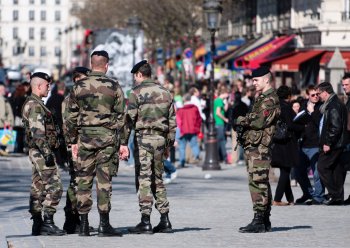 An open letter to the government Parliamentary oversight of arms exports having an impact