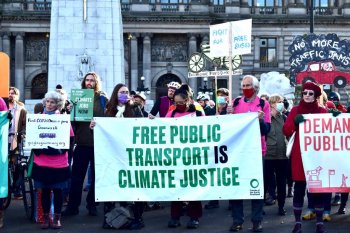 During the COP26 climate conference in Glasgow, 24 countries and a number of car manufacturers adopted a declaration pledging to phase out internal combustion engines by 2040 (or earlier). While this is a commendable initiative by the signatory states and a first step in the right direction, it makes the silence about the necessary expansion of public transport all the more deafening. The coalition agreement of Germany's new federal government, too, has virtually nothing to say on the subject of public transport. This is a serious problem because switching from internal combustion to electric cars will not solve many of the challenges associated with climate change: electric cars do not eliminate land-use problems in our cities, and manufacturing them is both resource- and energy-intensive. On 24 November 2021, in its resolution on critical raw materials, the European Parliament voted in favour of developing new mining areas for critical raw materials such as lithium and cobalt (which are used, among other things, in electric-car batteries). However, as climate protection organisations rightly point out, the focus should be on reducing overall material consumption in the EU rather than on developing new mining areas. Moreover, reducing the EU's material consumption would be an opportunity to free the regions of the Global South from a dependence on extractive industries.

In order to meet the 1.5 degree target set by the Paris Agreement, public transport will need to be expanded in all parts of the world. Three quarters of all emissions from the transport sector come from road traffic, so it is clear that major CO2 savings must be made here. This can be achieved, on the one hand, by comprehensively expanding public transport, which should be offered at affordable prices or even free of charge, and on the other hand, by transporting more freight by rail.

Public transport around the world has suffered the effects of a collapse in passenger numbers due to the pandemic: its workers have been and continue to be exposed to a higher health risk than those in other sectors, and revenues have slumped due to falling passenger numbers, raising fundamental questions about the financing of public transport. The current boom in electric cars must not lead to public transport being neglected or, worse, called into question. On the contrary, we need to see a reduction in the number of cars in our cities and better, affordable or free public transport. This was highlighted at a joint event at COP26 organised by the International Transport Workers' Federation[1] and the Rosa-Luxemburg-Stiftung Brussels Office, at which the governor of the Indonesian capital Jakarta, Anies Baswedan, called for an urgent increase in government investment in public transport worldwide. Reconstruction after the COVID-19 pandemic must put public transport at the top of the agenda, he said, because as well as getting people from A to B, it "connects" people locally. Jakarta had set itself the goal of doubling the number of journeys made by public transport by 2030 and of becoming the global model for expanding urban public transport in the years ahead. A restricted-traffic zone was also planned for the city centre, he added.

Public Transport Back in Public Hands

It is also vital to return public transport to public ownership. This is perfectly illustrated by Glasgow, the host city for this year's COP26 climate conference. Glasgow's bus services were privatised in the 1980s, leading to an absurd situation where there are three different operators of this mode of public transport in a city of 600,000 inhabitants. Since then, prices have risen steadily, and have become simply unaffordable for many people. The level of service has also deteriorated, in terms of both frequency and the coordination of buses with other means of transport. The local initiative Get Glasgow Moving has been fighting for years to bring the city's bus services back into public ownership. Some routes have been scrapped as they were not "financially viable" for the private firms operating them. What's more, the city has high levels of poverty, and much of the population does not own a car and is therefore entirely dependent on public transport. Meanwhile, private bus companies in Scotland receive GBP 314 million in public subsidies each year. This is simply unfair and illustrates why public transport should be publicly owned: it is a service of general interest and must not be subordinated to the profit interests of private enterprise. These demands were also voiced by Jennifer McCarey (Glasgow TUC) during the COP26 event: buses should be returned to public ownership, she said, because the system had become increasingly dysfunctional since privatisation. It was important to think globally and act locally.

The Scottish capital Edinburgh shows what can be achieved: there, bus services are publicly controlled, public transport is vastly superior, and fares are only half what they are in Glasgow.

Free Local Transport for All – Not Just for Climate Conference Delegates

On 10 November 2021, as part of the COP26 counter summit (People's Summit), Get Glasgow Moving together with Friends of the Earth Scotland organised a demonstration that was widely reported in the local press. Among other things, the demonstrators criticised the fact that COP26 delegates were given a free travel pass to use on public transport, and that fancy new electric buses had been purchased to give the impression that Glasgow was investing in the fight against climate change. They called for public transport to be brought back into public ownership and the free travel pass to be made available to local people after the climate conference, as a way of delivering the right to mobility for all.

The debate on the role of the public sector in the provision of public services has been in full swing, particularly since the start of the financial crisis in 2007–08 and since the Labour Party took a prominent and much-publicised stand on the issue in its manifesto "For the Many, Not the Few". In Germany, left-wing party DIE LINKE also advocates public transport under local authority control and is calling for a special "remunicipalisation fund" to support the return to public ownership. The aim is to make the right to climate-friendly mobility for all a reality.

[1] The International Transport Workers' Federation launched its The Future Is Public Transport campaign in 2021: https://thefutureispublictransport.org/#share