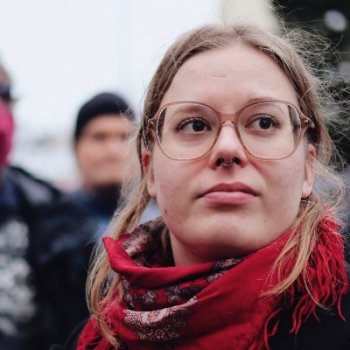 Russia's war of aggression against Ukraine grossly violates international law and thus leads to new discussions on how to deal with Russia. As a result, Finland and Sweden are closer than ever to join NATO. If Finland were to join NATO, the Western military alliance's land border with Russia would double. The most significant consequence in Finland regarding the Russia-Ukraine war has been the question of NATO membership, says Pinja Vuorinen, Chair of the Left Youth of Finland. Duroyan Fertl interviewed her about Finland’s position on the war and the expected consequences for Finland.

What is the Finnish government’s reaction to the war in Ukraine? Are there any significant changes in position? What measures does the government intend to take to establish peace in Ukraine?

The Finnish government has reacted to the war in Ukraine in a unified manner, with all the parties in the centre-left coalition government condemning the Russian attack on Ukraine. The most important step the government has taken in response to the situation has been to push for sanctions on Russia at both the national and EU levels. Generally, the attitude has been to take stock of the situation as the severity of the attack continues to fluctuate.

All in all, the attack has been quite a shock to Finland as it has been to Europe as a whole, with some calling for cool-headed reactions and others making much more heated demands for military action. Being a neighbour of Russia, it is understandable that Finland is particularly worried about the possible security risks the country might face.

So far, the government’s response has been to support Ukraine materially and to provide humanitarian support by offering temporary refuge to its people, as other EU countries have done. It has also called for peace negotiations, and the president of Finland has been in touch with both the US president Biden as well as the Russian president Putin.

What is Finland’s current position regarding the debate around NATO following the Ukraine invasion?

The most significant consequence in Finland has undoubtedly been the question of NATO membership, which has become a central political issue. Finland is not a NATO member state and for a long time, most of the population has not supported NATO membership. The war in Ukraine changed this. In just weeks, the majority of the population has done a U-turn and now supports NATO, though of course, whether this support will be long-lasting or is simply a shock reaction to the war is a question yet to be answered.

It is clear that some actors such as the right-wing coalition party see this as an opportunity to push the pro-NATO agenda they have held for decades. However, many other parliamentary parties have been vocal about their positions. For example, the Green party, which has not traditionally been forthright on issues of security, especially military politics, has been vocal about its support of NATO.

Of the current coalition government, only the Swedish People’s party openly supported NATO membership before entering government. However, the Greens have clearly changed their position to pro-NATO. This just leaves the Social Democrats, the Centre Party and the Left Alliance.

All of these parties have started discussions within their respective parties on whether or not their opinion will have to change following Russia’s invasion of Ukraine. However, the results of these discussions are yet to be seen, but it is not unlikely that some parties will switch positions.

Finland will be holding its parliamentary elections in April 2023, and security issues will certainly be on the table. It remains to be seen if a referendum on NATO membership will be held or if the next elections will become so-called ‘NATO-elections’. It is also not impossible that Finland will send an application to join NATO before the elections, though it is highly likely this will occur after the party congresses of the Centre Party – as well as that of the Left Alliance – have been held in June.

Is Finland supplying weapons to Ukraine or has it announced a supply? What is its position at EU level and vis-à-vis NATO?

Finland has supplied Ukraine with weapons in addition to other material support. In doing so it has set a historic precedent, as it had not previously directly donated armament materials to a country at war.

The approved programme of the current government includes a clause stating that Finland cannot sell or donate weaponry to countries at war. However, the government has broken this clause multiple times before, as it oversaw the sale of weaponry to the United Arab Emirates which is supplying material to forces in Yemen. In addition, it permitted a Finnish firm to sell armament material to Turkey, which is waging war against the Kurds, especially in Northern Syria.

Due to this, the public discussion on supplying weapons to Ukraine was initially somewhat mixed. Nevertheless, all the government coalition parties agreed on the donation of various supplies. At first, the information published concerned the export of bulletproof vests and composite helmets, but a few days later the export of rifles and RPGs was also confirmed. No government nor parliamentary parties opposed this.

Generally, Finland’s views on supplying materials to Ukraine align with other EU countries. As Finland is not part of NATO, there is no direct comparison in this regard.

How has the left party reacted to both the war and the government’s response? Have there been any significant changes in position? What is the left party’s proposal for concrete measures to end the war and for long-term peacebuilding in Ukraine?

As the Left Alliance party is a member of the government coalition, its reactions have largely been in line with the government’s, for example, in terms of sanctions, the donation of defence materials and the EU’s response. The left party has been very vocal in their support of sanctions on Russian fossil fuels. As most of Finland’s fossil-based energy comes from Russia, this is a key opportunity to accelerate the decoupling of our energy sector from fossil fuels.

When it comes to security politics, the discussions in Finland have been centred around Finland’s own safety rather than on the question of peacebuilding in Ukraine. To some degree, this is understandable as we share a 1,300-kilometre border with Russia, and as a small nation, we have a relatively small role to play in international peace talks. Nevertheless, there have been constant calls for peace talks requesting the withdrawal of Russian forces from Ukraine and a stop to the invasion.

According to the left party, what would a progressive and sustainable security infrastructure in Europe (and/or globally) look like? (What impact does the left party have on discussions and policies responding to the situation?)

Though the party does currently stand in opposition to joining, its size alone does not make it a significant enough actor to prevent Finland from joining NATO – unfortunate as it might be. As such, the reaction has been quite absurd. In addition, the party is viewed as being Russian-minded, despite having been one of the most vocal parties in support of the Russian opposition and the oppressed minorities in the country.

The party will hold its party congress in June this year, and the security politics of the party are likely to change. Generally, the party has supported Nordic security cooperation, with Sweden in particular, but with other Nordic countries as well. It is possible that in the aftermath of the war in Ukraine, there will be increasing calls to strengthen EU security infrastructure as an alternative to NATO.

Have there been protests in Finland? What are their most important demands? What role do peace organisations play in organising the protests? What role do trade unions play?

There have been multiple protests throughout Finland and several in Helsinki. Generally, the protests have consisted of demands for Russia to leave Ukraine and general calls for peace. The demonstrations have mainly been organised by either local Ukrainian organisations or peace organisations. On 26.2. demonstrations against the war in Ukraine drew around ten thousand people to the streets of Helsinki.

As is normally the case in Finland, trade unions have not been the ones organising demonstrations. However, they have shown solidarity with Ukraine, for example by publishing statements. One of the demonstrations in Helsinki was organised by political youth organisations and notably included the youth organisations of all the parliamentary parties ranging from right to left.

Pinja Vuorinen is Chair of the Left Youth of Finland