The music is playing elsewhere. Traffic revolution in Europe 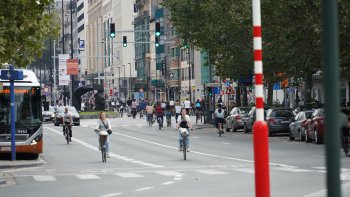 German cities as pioneers of the traffic revolution? That was true once! Nowadays, it is others who are finding alternatives to the car. Which measures are successful, in what context are they taken, who are the key players? An overview.

Freiburg and Münster are known throughout Europe as examples of successful municipal transport policy. Ramón Linaza, a leading Spanish transport activist, recalls: “we have always seen Freiburg as a reference.” However, Freiburg’s reputation as a cyclist’s city (immortalised in the Tocotronic song Freiburg) is based on a policy that came to fruition in the 1990s. In addition, neither Freiburg nor Münster succeeded in reducing the proportion of cars in the Modal Split (a breakdown of traffic volumes by the different modes of transport). Both roads and car parks continued to be built apace.

Gradually, traffic science has established that support measures for alternative means of transport (pull measures) often remain ineffective if the attractiveness of private cars is not restricted at the same time (push measures). We can speak of a traffic revolution if it “reduces or replaces private car traffic with other modes of transport,” sociologist Katharina Manderscheid is convinced (Katharina Manderscheid, “Transition of drive, traffic or mobility? For the electrification of the automobile disposition”, in: Brunnengräber, Achim & Haas, Tobias. Electromobility Construction Site: Social Science Perspectives on the Transformation of (Auto) Mobility. Bielefeld: transcript, 2020, pp. 37-67.). The International Transport Forum also recommends a radical reduction in the number of private cars as a key tool in the traffic revolution. Disillusioned, mobility researcher Lisa Ruhrort notes that if this benchmark is applied, then “no significant traffic revolution has been recorded” in Germany.

If we are looking for more recent examples of successful traffic revolution measures, they are more likely to be found abroad. In Copenhagen, for example, two thirds of all journeys are made by bicycle.

The Austrian capital Vienna also has a good network of cycle paths, in addition to the well-developed local public transport. With the €365 annual ticket, it is a role model for many municipalities. In Austria, a €1,095 flat rate has been in effect for the entire country since October 2021.

In Tallinn, a 2012 referendum saw the population vote in favour of free local public transport, and since 2013 the use of public transport has been free for residents and is financed by income tax.

Since 1 March 2020, all public transport throughout Luxembourg has been free of charge for residents, international commuters and tourists alike.

London set up 72 so-called Low Density Neighbourhoods in 2020 alone – mostly in the outer boroughs. As Rachel Aldred, an expert in active mobility from the University of Westminster, explains, these are small areas in which cycling infrastructure and closures of residential roads to car traffic are carried out according to the Dutch model, commonly referred to as “mini-Hollands”.

Which measures are the best likely depends on the specific individual circumstances and can vary greatly from city to city. “No city has got everything right,” emphasises Giulio Mattioli from TU Dortmund.

Pontevedra: A deep breath for the car-free city

A town that has done many things right is the small port town of Pontevedra in Galicia, where an unprecedented cultural change began over twenty years ago. Even in 1999, Pontevedra was an ordinary Spanish city, characterised by cars, noise and exhaust emissions. “There were up to 14,000 cars on our roads every day. The old town was utter chaos,” recalls Miguel Fernández Lores, mayor of Pontevedra.

Over the next two decades, private motorised transport was gradually pushed out of the town centre, creating the largest pedestrianised zone in Spain. Since the start of the millennium, the town has reduced the daily number of vehicles in the town centre from 80,000 to 7,300 (2018), a decline of more than 90 per cent. Today, an impressive 65 per cent of journeys in the town centre are taken on foot.

The urban transformation of Pontevedra and the measures it has taken to reduce motorised traffic in the town centre have reduced CO2 emissions by two thirds since 2003. Not only is Pontevedra’s population healthier, it is also in less danger, as no road deaths have been recorded since 2009.

The mayor of Pontevedra, who has already been re-elected many times, is undoubtedly the key figure in the town’s traffic revolution. Early on, he campaigned fiercely for a U-turn on transport policy, arguing for the vision of a pedestrianised town.

Miguel Álvarez, mobility expert from the Mobility Institute said: “Pontevedra has a true champion, a high-ranking political figure. The mayor has already been in office for a long time and has been able to operate in an environment of high political stability. He had a solid base and a clear vision he has set his sights on, and he has seen himself vindicated, he has pursued that, that is very important.”

Vitoria: At the second attempt …

Vitoria-Gasteiz, a medium-sized city in northern Spain, is also a “hidden champion” of the traffic revolution. Since the 1950s, it experienced a rapid industrialisation process, during which the population grew considerably. In 1998, the City Council adopted Agenda 21, which included a wide range of measures to promote environmental protection and sustainability, including the establishment of the green belt, a continuous chain of green spaces. Cycling infrastructure was also massively expanded; however, the “Freiburg effect” emerged, as it fell short of the actual goal of reducing private car traffic. Car traffic had continued to increase, with its proportion in the Modal Split rising from 29 per cent to 37 per cent between 1996 and 2006.

A fresh attempt followed in 2006. In addition to the establishment of “super blocks” and the construction of two tram lines, one measure stands out from this second phase: the redevelopment of the Avenida Vitoria, the widest street and an important arterial route towards the largest Basque city of Bilbao. The Magistrale, formerly named after Spain’s dictator and head-of-state Franco, was to do away with its 1960s-inspired design, formerly with ten lanes for parked and moving car traffic. In 2015, the redevelopment of the Avenida Vitoria was completed, the number of lanes for motorised traffic was reduced from five to four and the parking lanes from five to one. At the time, the press spoke of a revolution and an “unprecedented intervention” with quite high symbolic significance.

And this time, it has managed to turn the tide. The proportion of car traffic in the Modal Split fell from 37 per cent to 26 per cent, and even more sharply within the “super blocks”. As a result of these measures, the proportion of cycling also rose from three to just under nine percent between 2006 and 2019.

The key to the success of Vitoria’s transport policy is a stable and lasting consensus across all political parties. “In Vitoria, we managed to keep mobility out of the political struggle,” traffic scientist Floridea Di Ciommo emphasises.

Traffic restrictions such as the pedestrian zones in Pontevedra, the reduction of lanes and the establishment of “super blocks” are one thing. In recent years, both traffic science and traffic revolution activist groups have increasingly turned their attention to “stationary traffic”, i.e., parking. For decades, Donald Curran Shoup, a professor of urban planning at UCLA, has drawn attention to one of the biggest failures and injustices in car-centric society. His three golden rules are: do not build new public parking spaces, introduce comprehensive parking charges, varying in size according to supply and demand, and allow revenues to benefit the immediate neighbourhood. Residents, pedestrians and cyclists should benefit directly from this regulation: “all parking is political,” he insists.

Impressive numbers are coming out of Paris. The Seine metropolis plans to “destroy” 72 per cent of its on-street parking. Paris has 621,600 parking spaces both on and off the street, totalling 96 hectares of urban space reserved for residents’ cars. The city has 462,700 registered private vehicles. A number that decreases every year along with Parisians’ car use.

Anne Hidalgo, the Paris mayor and French presidential candidate, has made a lot of headway in the French capital and is seen as a global role model as a politician who is brave and consistent in her approach to the traffic revolution. Mayor Anne Hidalgo wants to make cycling-friendly changes to all Paris streets by 2024. Her goal: “we want to achieve a new organisation of the road.” A crucial means to achieve this is precisely the removal of the on-street parking spaces to create space for cyclists.

Having a long-term plan is necessary, as Pontevedra and Vitoria have shown. But it is also important to seize the opportunities that arise, to take advantage of margins, to playfully test the limits of what is possible. The role model for this “tactical urbanism” is undoubtedly Barcelona. New York city planner Mike Lydon coined this term several years ago, which refers to urban design changes that are achieved by bypassing the usual bureaucratic channels. “What makes Barcelona special is that the city has become a place of experimentation,” Wenke Christoph and Stefanie Kron observe, in an investigation by the Rosa Luxemburg Foundation.

Barcelona is Spain’s second largest city, capital of the autonomous region of Catalonia, and home to 1.6 million people, making it comparable to the German cities of Hamburg or Munich. Barcelona, like all Spanish cities, has traditionally been heavily burdened by car traffic and has chronically high levels of pollutants.

During the pandemic, street areas, mostly parking spaces, were provided quickly and unbureaucratically in many cities for outdoor catering and hospitality. These areas were separated with simple structural elements; parking spaces became seating areas for restaurants and bars.

However, mobility expert Floridea Di Ciommo, who, as head of the non-profit cooperative cambioMO, advised the city government in Barcelona for many years, emphasises that tactical experimentation does not in any way mean that goals and long-term perspectives are not envisaged.

What can we learn?

What about the transferability of the experiences of the cities described here? Can conclusions be drawn from which German communities can learn?

Firstly: astonishingly, despite all the differences in size (from small towns to megacities), language, culture and nationality, the commonalities prevail. In addition to the dominance of the car, the problems, fears, apprehensions, and debates are also similar:

This article was first published in German at www.klimareporter.de.