A Strategic Compass for Europe's Return to Power Politics

Those who need a compass have usually lost their bearings before – and this is certainly true of the European Union (EU) and its Common Foreign and Security Policy. At least this is what a new basic document puts forward, with which the European Union more or less openly admits to having operated at various levels and for many years with strategies and concepts that had no “reasonable” relation to one another. The “Strategic Compass”1 (SC) adopted at the EU summit on 25 March 2022 is intended to provide an explanation for this and to set the direction of future European military policy. As a new link, the Compass aims to close the currently gaping gap between the general objectives of the Union set out in the “European Union Global Strategy” of 2016, the outdated “Headline Goal” dating back to 2004 and the various mechanisms that have existed since about 2017 to build up military forces and capabilities (CDP/CARD; PESCO; EDF).

As the ultimate goal, the EU Global Strategy stated that it was necessary to achieve extensive “strategic autonomy”. To achieve this, in the first instance, a massive expansion of the military apparatus is considered necessary. Only then will the Union be able to assert its interests in times of increasing conflicts between great powers.

The objective of the Strategic Compass is to operationalise this requirement and synchronise it with the various levels of strategy and armed forces planning, which have so far been quite disparate. The Russian war of aggression against Ukraine, which began in the final stages of drawing up the document, acted as a kind of catalyst for such efforts. The previously prominent “return of power politics” thus became the all-dominating element, which is now to be the focus of most of the attention, due to unplanned recent revisions. The European Union needs a “quantum leap” to be able to “expand its geopolitical position”. This is any case how the Strategic Compass refer unabashedly to the actual goal, which is what is hiding behind the somewhat harmless term of strategic autonomy (SC: 6).

What is unusual is that the document not only attempts to close a significant gap between strategy and armed forces planning, but also expresses “clear targets and milestones” (SC: 3) in the form of over 60 individual proposals. Military build-up and arms investments, in particular, are sometimes quite specific and ambitious, and the project to set up a “Rapid Reaction Force” with 5,000 soldiers was widely recognised. Officially, these targets are intended to strengthen commitment, but to some extend the impression is given that controversial issues have simply been put off. As ambitious as the Strategic Compass may seem, its scope will therefore crucially depend on the extent to which it will be possible to actually achieve the stated goals. Another potential area of conflict could also be the contradiction between increasing efforts in European towards achieving autonomy, and the leadership claimed by NATO (or the US), which is also rather tediously glossed over in the document. In fact, the Compass lays the foundations for positioning itself as an independent military world power, possibly even in competition with the US in the struggle between the great powers. The really problematic issue in all of this is the full commitment to the expansion of the military apparatus as the only proven means of responding to the increasing conflicts between great powers. Other aspects are reduced to add-ons within these power conflicts – confidence-building measures, disarmament initiatives or arms control, which would be suitable for reducing the ever-increasing tensions, but unfortunately only lead a shadowy existence in the Compass. The Compass could have given the EU the chance to distinguish itself with a countermodel to the militarised competition between great powers. This would be of central importance if to concentrate efforts on the truly pressing human problems: the climate disaster, poverty and hunger and the health crisis. The Compass barely touches on these matters. Instead of starting here and focusing on issues of justice, the Compass turned into a mere work programme for the accelerated armament of the Union.

Jürgen Wagner is a political scientist and historian. He is a managing member of the Tübingen Information Centre for Militarisation (IMI) e.V. and author of a number of specialist articles on security policy issues, with a focus on: Militarisation of the EU, NATO expansion to the East, current wars. In 2018, he published with Claudia Haydt the book: “The militarisation of the EU. The (un)stopable path of Europe to a military superpower”. 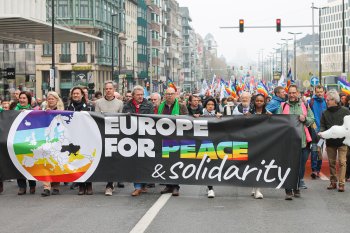 Belgium’s response to the Russian invasion of Ukraine 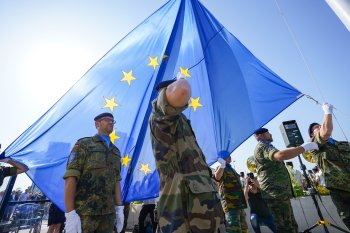 A Strategic Compass Leading Where? 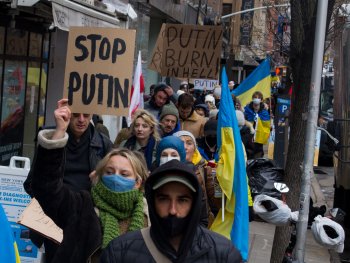