Event report on the online event on 4 October 2022 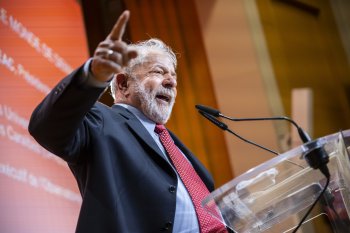 Two days after the first round of the presidential election in Brazil, the Rosa Luxemburg Foundation Brussels, in cooperation with the Rosa Luxemburg Foundation Brazil, organised an online event with former Foreign Minister Celso Amorim from the Brazilian Workers' Party PT, Professor Terra Budini from the University PUC-SP in Sao Paulo and Helmut Scholz from the left group in the European Parliament (THE LEFT).

After the first round of voting, the left-wing candidate Lula was ahead with 48 per cent, as predicted by the polls. But unfortunately he did not manage to win the majority of votes in the first round. All the more shocking is the very good result of the far-right incumbent Bolsonaro (43 percent), which was not expected to be of this magnitude. In the second round of the election, Lula won on 30 October 2022. But: in the congressional elections, also held on 2 October 2022, the far right did very well, so it will continue to be very present in Brazil in the coming years.

In his contribution, Celso Amorim (PT) highlighted how the past years under the far-right president Bolsonaro have been a period of violence that has led to polarisation in the electorate. The right has now made gains in the congressional elections that took place at the same time and will continue to make its influence felt in the coming years. The crisis of capitalism and neoliberalism led to polarisation among the electorate, including the right-wing camp. And admittedly, Bolsonarism has to be put into perspective with many voters, who are also opportunists and succumb to the charisma of some moderate right-wingers. When Lula wins the presidential election, he will increasingly turn to the issues of climate protection, trade policy, sustainable development and South American integration. In 1994, trade policy would still have been under the heading of "free trade", but today the focus must rather be on respect for human rights and climate protection - this, however, should not lead to protectionism. Lula sees Brazil as a bridge country between South America and Africa and that is why it is so important that the negotiations on the EU-Mercosur free trade agreement are resumed. In this context, as Celso emphasised, it was crucial that Brazil could develop itself and create a political space for industrial policy, because after all, Brazil should not become "the breadbasket" of the EU or China, but maintain and expand its own industrial base. For example, Brazil must be given more flexibility in the use of patents to promote independent industrial development.

Terra Budini stressed in her speech how important it is for Brazil to make the transition to a lower-carbon economy that is truly based on sustainability.  The EU-Mercosur free trade agreement is embedded in the current growing conflicts of land grabbing from indigenous peoples, curtailment of indigenous rights, exploitation of the Amazon and increasing greenhouse gas emissions. At the same time, we have seen a significant growth of the informal sector, precarious employment and a generation of unemployed growing up. The EU-Mercosur free trade agreement is not really known by the general public in Brazil, and since 2016 there has even been an exclusion of social partners such as trade unions from the debate, so that there is hardly any access to information. When Lula wins the presidential elections, he will work to open up the negotiations to civil society and create sufficient transparency.

Helmut Scholz (DIE LINKE.) explained in his contribution how important it was to place sustainability criteria and social standards at the centre of trade agreements. The current text of the EU-Mercosur free trade agreement is not new, but the result of a 20-year negotiation process and urgently needs to be renegotiated. Food security and energy security are the central tasks of the future, and fair trade relations are all the more important so that international value chains are not destroyed. In the current text, for example, there is no arbitration for climate protection issues - this must be changed urgently. Tariffs for the textile sector and the automotive industry are also to be reduced by up to 35 per cent: this poses a major problem for South America, as it threatens to de-industrialise broad regions. The refinement of mined lithium for the production of batteries for electric cars would also have to happen locally in order to create jobs there. Therefore, Lula had already announced that he would rewrite the negotiating text in order to achieve improvements and a re-industrialisation of the Mercosur countries. The left group in the European Parliament would campaign for this and exert pressure on the European Commission to bring about an opening of the treaty text.