Euro-Crisis: in Ireland, the worst is yet to come

Ireland is to receive €85 billion from the European Financial Stabilization Facility, a large part of which will be passed on through to the country’s banks. Altogether, this credit line has been stocked up to the tune of €400 billion; on top of that comes €60 billion from the European Commission’s Financial Consolidation Mechanism. The Commission was particularly proud of the latter instrument, since it thought it was getting a tool that might move the Brussels bureaucracy a tiny step towards greater financial autonomy. But their hope that of some day becoming a player on the financial field was soon dashed: Merkel and Sarkozy made it clear that this mechanism will expire in 2013.

Ireland is thus the second country, after Greece, to which delegations of the Commission, the ECB and the rightly feared IMF have been jetting to allow the elected representatives of the people to tell them how those citizens can best be ripped off, so that the financial nest-eggs of the citizens in the centre of the “blue banana”, i.e. the “core” of the EU, can keep their life insurance policies and their pensions. The real outrage is that the elected Irish government has now become accountable to three organizations which are consciously isolated from all democratic influence. The Commission and the ECB can only with very great difficult be described as democratically legitimized; in the IMF, voting rights are purely and simply allocated according to the financial power of the members!

The supply side of the crisis, “forced capitalists” in the centre of the “blue banana”

Right now, the biggest tickle is trying to figure out who’s providing guarantees for whom. Irish banks have gambled away their money, which they had got from banks in the old “Deutschmark block” – Germany, Austria, the Netherlands and France. Now, where did those banks get the money from? Much of it, of course, from the ever less heavily taxed rich of their own countries, but much, too, from the savings of people we could call “forced capitalists”. i.e., those who are forced to squirrel away every last possible cent, since their governments have smashed their solidarity-based social insurance schemes. Financial market capitalism forces people to increase the rate of savings, and this is precisely the money that has flowed to the European periphery over the past few years, since the stagnation of real wages in Germany has made investment there unprofitable.

The demand side of the crisis in the periphery: the Irish real estate sector

Due to their traditionally higher inflation rates, the peripheral countries of Europe had de facto negative interest, which stimulated the building boom. Like the German governments of recent years, the Irish government reacted wrongly and spurred the boom on even more – with tax reductions, as always. The real estate prices behaved as desired, quadrupling between 1996 and 2006, the last year of the “boom”; the bust, a drop – so far – of 36 per cent between 2006 and 2010, was the result. Obviously and unfortunately, there is still plenty of drop space left. Just in September 2010, the mortgage debt of private citizens in Ireland came to €117.4 billion. We are talking here about a country with 4.4 million people.

The unpayable real estate debt is ripping gigantic holes in the little country’s vastly oversized banking sector. The Irish government has therefore created something called the National Asset Management Agency, the NAMA. This is to be Ireland’s bad bank, it is supposed to manage the banks’ uncollectable loans. For good reason, it will pay only half of face value for these debts – knowing it will never be able to unload them again. But it is exactly this adjustment in value that will mean heavy losses for the banks, which are “suddenly” noticing that their accounts are devoid of real value. The €73 billion in bad paper already sold to the NAMA has left yawning gaps in their balance sheets. Massive undercapitalization looms: many banks have been in danger of falling below the minimum capital share, which is a complicated term for going broke. Therefore, the state has been forced to throw more money at the banking sector once again – this time, €45 billion. Thus did Ireland quickly rack up an annual budget deficit of 32 per cent.

Thanks to our much praised free market, and since the EU actually bans capital traffic controls, the market has reacted as “desired”. Money has drained off the Emerald Isle, Irish banks had to repay €55 billion to international creditors in September 2010 alone. One of the most heavily hit institutions in Ireland, by the way, is the Depfa Bank, a subsidiary of the German Hypo Real Estate – Germany’s Lehman Bros. Der Spiegel reports that in recent weeks, “a full-fledged exodus of billions off the island has taken place.” Despite all the losses to date, the Irish financial market is sitting on €200 billion of uncorrected “assets”. Yet more money will have to flow.

“Nations on the dole”

“Nations on the dole” is what economist Peter Bofinger calls the future of European countries which “have lived beyond their means”, as the propaganda of the bourgeois press in the Deutschmark block puts it. He should know, for he is the only real brain in the circle of so-called “economic wise men” who each autumn explain to the German government what economic policy path to take – and who, each autumn anew, are dead wrong. 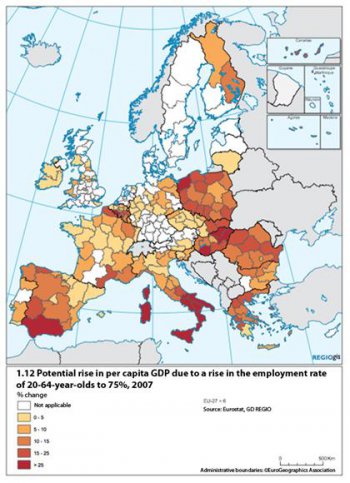 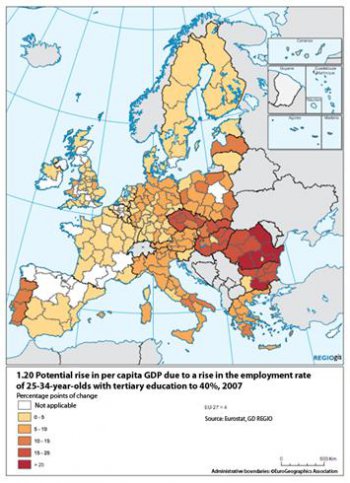 Can an increase in the employment rate help Ireland and Portugal free themselves from the debt trap?

More jobs will hardly increase the GDP in Ireland or Portugal. Even the new Cohesion Report of the European Commission (page 28) shows this fact: 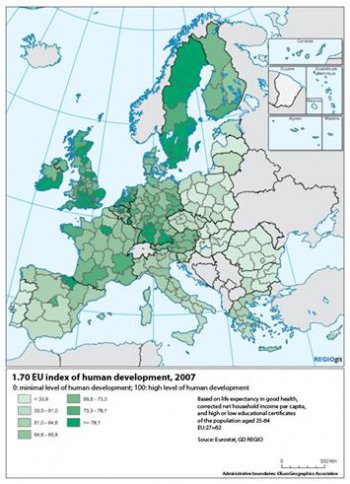 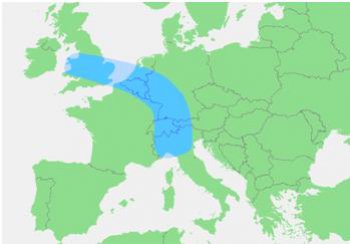 The caravan moves on from Ireland to Portugal…

It is necessary to take into account that Ireland had after all managed in recent years to keep measurable social inequality within bounds. According to the Gini Index, with which unequal distribution of incomes and assets is measured (where zero means completely equal distribution and 1 completely unequal distribution), Ireland had managed to reduce inequality from 0.359 in 1987 to 0.307 in 2008. The question then is how to describe the effects of the crisis upon Portugal, if we have already called its effects upon Ireland a “catastrophe”. For unlike Ireland, Portugal saw a major growth in inequality over the past years; its Gini Index score was 0.356 in 1995, and had increased to 0.385 by the outbreak of the crisis in 2007. Thus, Portugal did not use the opportunity of the growth period to make life more tolerable for all its citizens. Today, some 280,000 Portuguese depend on support from charitable organizations to eat at least one hot meal a day, and 600,000 Portuguese have no social protection whatsoever.

As we can see, Portugal was during the past few years the country in western Europe with the lowest progress in human development, based on life expectancy in good health, corrected net household income per capita, and high or low educational certificates of the population aged 25-64.

What can the citizens of Portugal expect from their ruling elite now? Not much, as the following data show:

The only positive sign is the behaviour of the people, who have repeatedly come together in large demonstrations and strikes to show the government that things cannot go on this way. The urgent question is whether the pressure of broad strata of society will be enough to hold back the disaster before it is too late. For there are reports that Portugal is experiencing a phenomenon which we are otherwise familiar with only from development policy discussions of economic crises in developing countries: the return of city dwellers to the countryside to find work in certain sectors of agriculture (ARTE Report, May 30, 2010)!

… and via Spain to Italy?

If Portugal has a flu, Spain will at least get a cold. And, at present, Spain is already badly hit economically. Portugal will have to borrow €15 billion on the international financial markets in the spring of 2011. With the rising interest rates for its loans, refinancing is no longer assured over the long term. This will hit Spain directly, for Portugal will then no longer be able to service the debt, amounting to €57 billion, which it owes to Spanish banks. After Portugal, it could then become the first large country in Europe to be threatened by national bankruptcy – as early as mid-2011.

How do we get out of this vicious circle?

IMF structural adjustment plans have already failed in Africa and Latin America. Due to the lack of any possibility to devalue, hard-boiled economic liberals freely admit that the Commission’s austerity programmes will not help the European countries. Even the euro-bonds, which promise the best chance to fight the crisis over the long term, will not in fact be able to help, thanks to the suggestions made by their advocates. Chief among them is Luxemburg Prime Minister Jean-Claude Juncker, who would like to have only 40 per cent of national debt financed in this manner; the remaining 60 per cent would then be traded with even higher surcharges. This would therefore not help the countries affected. Ultimately, all that will help is inter-regional redistribution between the countries of the “Blue Banana”, the centuries-old stable growth core of Europe, and the peripheral countries.

The further development of the EU to a federation is the ultimate goal; here, redistribution between rich and poor regions would be a matter of course – for good. Objections to the effect that this would hit the poor in the countries of the old Deutschmark block the hardest do no good here. The implementation of a transfer union will have to be accompanied by “haircuts” for the rich in all countries, i.e. by targeted tax increases for upscale incomes. This is how we will have to fund the bank rescues which are necessary – those which secure the assets of all citizens, and not just those of the rich, as has been true in the past.

And two more steps will have to follow: First, the financial markets will have to be permanently regulated, so that they can no longer be used as a weapon against democratic governments. And second, the figure of the “forced capitalist” – the low to medium earner in the core countries forced to fuel the financial roller-coaster with his or her meagre savings – will have to be abolished. And that means taking the social security systems back out of the market again.

1] “Learning from the Soviet Union means learning to win” was a much-used – and much ridiculed – slogan in East Germany and other “real-existing socialist” countries.