Analysing European Social Democracy: The Stance of the Left

Report of the Helsinki Workshop 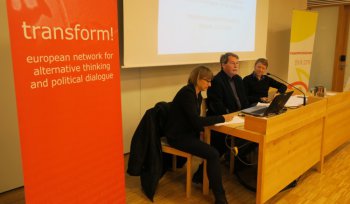 The workshop was dedicated to the state of affairs in European Social Democracy and the interrelation with the current crisis and the dismantling of European integration. In the framework of the event, we analyzed the decline of Social Democracy through the prism of post-democratic politics, as well as from the political economy perspective.

20 people from ten different countries participated in the event which was co-organised by transform! europe, Rosa Luxemburg Stiftung Brussels and the Left Forum (Vasemmistofoorumi) on 14 and 15 November. It was held in the Paasitorni congress center located in the Helsinki workers’ house, a historical centre for Finnish social democrats which was constructed in 1908.

On both days we examined specific case studies of social democratic parties, namely the SPD, the parties of the Central-Eastern European region, the Social Democractic Party in Italy, PASOK in Greece, SAP in Sweden and the Labour Party in the UK.

Social democracy is in crisis

Since 2005, support for social democratic parties in national elections in Western Europe has been declining and overall support has dropped from the traditional 30-35% level to below 25%. In the European Parliament, the proportion of social democrats has equally dropped from the traditional 30-35% level to below 25%. The only exception is the “Partito Democratico” in Italy that is not characterized as a typical social democratic party, but rather as a modern populist party that combines populist discourse with social issues. In part, this drop can be explained by the fact that the EU has expanded to include countries in which social democrats have lower levels of support than in Western European countries. Although support for the radical left has increased, it has not compensated for the losses of social democrats. This has also led to increased support for populist right parties. In Scandinavia in particular, the social democratic parties did not have the political ability to prevent the rise of the far right.

Part of the crisis is that the social democratic parties are divided: firstly, in relation to European integration versus a more nationalistic policy and secondly, in relation to traditional industry versus new forms of labor (and new labor relations). Their dead ends had been predestined since the social democratic “modernization” of Blair, Schröder and Clinton, as Richard Detje from the Sozialismus journal pointed out.

Petter Nilsson from Sweden emphasized how Swedish social democracy should be understood in terms of a reformist policy that was a strategic path to socialism, with gradually-implemented reforms. This reformist narrative considers economic democracy as the result of the establishment of political democracy. However, with counter-attacks from the business community and pressure coming from the political forces of the right, the Swedish social democrats realized the ideological effects of participating in parliamentary institutions: the goal of winning elections has led to a crisis with regards to membership, since coalitions with other forces appear as a necessity. Therefore, the social democrats made compromises regarding the party’s political goal, a decision that demobilized the membership.

In Italy, the crisis of social democracy was caused by “the clear victory of capital over labor” resulting in imbalanced power relations between the classes and the very reason for this “social compromise that marked the previous decades, vanished” as Marco Revelli stated. Since the financial crisis of 2008, the political system in Italy is almost completely composed of entities that use a populist approach. Cornelia Hildebrandt, from the Rosa-Luxemburg-Stiftung in Berlin underlined that the rise of populism rests on a lack of political organization.

The roundtable discussion, in which the Secretary General of the Finnish Left Alliance, Joonas Leppänen, participated, focused on the closeness of the social democrats and the radical left. Leppänen emphasized that the radical left should position itself independently from social democrats but not only as something which is more left than social democrats, and focus on democracy – not from above but from below – listening to the people and channeling all the demands which are relevant from the perspective of the people.

Hanna Lichtenberger, an Austrian political scientist, focused on Austria where the position of the radical left is weak and visible mostly in non-parliamentary movements. The social democrats define themselves as the only movement to counter the populist right.

In Spain, the social democrats used to have a more radical political agenda but the recent political changes led to political co-operation with the right-wing Popular party. This cooperation in such a crucial period results from the tolerance, on behalf of the social democrats, for an economic policy which the radical left can only but fight, as Victor Alonso Rocafort from Izquierda Unida of Spain stated. The socialist party is controlled by a bureaucratic elite that has given up on the political aims of the past. The radical left aims to achieve transformation, not just change, and positions itself against capitalism. The social democratic policy is exhausted in many ways.

In the final discussion, Haris Golemis, Director of the Nicos Poulantzas Institute and scientific advisor to transform!, concluded that there is no united social democracy and there is no unity among the radical left. The left can co-operate with social democracy, as well as with the Greens, but the social movements and the trade unions should be included in this cooperation. Otherwise the left-wing tendencies of social democracy will be alienated. The strategy of the left should not be the same in all regions of Europe; for example, the Central and Eastern European experience is completely distinct. Therefore, he stated that while trying to retain our unity in our strategy at the European level, we should be very specific in our strategy at the regional level, because the opponent does the same.

As Richard Detje stated, we should rethink the capitalist period that we live in so as to address the class structures of society. Walter Baier, the political coordinator of transform!, emphasized the “duty” of the left to build a plan for the democratization of the state, the European institutions and the treaties.