Shared political agenda for the struggle for health 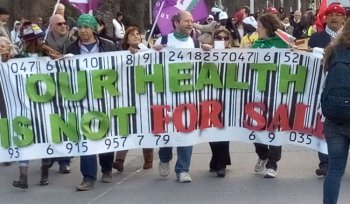 On 25 & 26 October 2016, around 20 representatives coming from Africa, South, Central and North America, Asia and Europe met in Brussels to discuss struggles for health around the world. The meeting was co-organised by the European network against health commercialization, People's Health Movement Europe and the Brussels office of the Rosa-Luxemburg-Stiftung.

Healthcare systems: past and present trends

In the first part of the workshop we discussed the historical developments of healthcare systems, as well as the current trends. Most healthcare systems have been developed between the end of the Second World War and the process of decolonization, for two main reasons. The first was to answer to a growing social demand of an adequate and universal access to healthcare. The second was related with the role of the State in the organization of social reproduction.

Between the late ‘70s and beginning of the ‘80s, starting with the debt crisis in Latin America, new tendencies appeared. In this period the pressure to privatize the healthcare sector and open it to the market has been imposed by international organizations like the World Bank (WB) and the International Monetary Fund (IMF). These tendencies spread from the global South to many of the Western countries, where they are now reinforced by the global financial crisis and the imposed austerity measures.

The privatization of healthcare financing and provision has been accompanied by a cultural change, characterized by a shift in responsibility from the collective to the individual. The role of the State has been pushed from guaranteeing the fundamental right to health through financing and providing healthcare, to being at the most a regulator of privately organized systems. Meanwhile, social movements have been not strong enough to oppose these changes.

In the present situation, social movements are on the one hand trying to oppose further privatization in healthcare, but on the other they are experimenting and promoting solidarity and mutualistic approaches, not entirely trusting the State any longer.

In the discussion, the possibly ambiguous nuances of the idea and practice of “mutuality” were highlighted. Even if tit may represent a step towards the development of progressive alternatives to the current market trends, mutuality can also easily turn into charity, relieving the State from its responsibilities while at the same time representing just a different form of privatization.

The group agreed that a strong opposition needs to be maintained against all forms of privatization of healthcare services. This opposition can be strengthened through a strategic convergence of the struggles of citizens and (health) workers.

The participants commented on the strong influence that ideology plays in the imposition of the neoliberal model at the global scale, and agreed on the need to push forward alternative values and discourses in the field of health and healthcare.

Addressing the social determinants of health

The discussion then shifted towards what kind of public services we want, starting from the idea that a health system should also take into account the social determinants of health. Medicalization of health issues was in fact highlighted as a part of the commodification process of healthcare. Opposite to this, the community was seen as the subject entitled to redefine health as something culturally and socially belonging to the public sphere.

The social determinants have been described as key variable in the determination of public health, and participants agreed that they should be addressed as one of the central factors in opposition to the medicalization of the health.

The social determinants of health approach opens the field to community organization and the convergence of different struggles. It is therefore a promising space to build alliances and propose alternatives that increase people's control over their health (including healthcare systems).

The discussion on the social determinants of health was the perfect point of connection between the analysis of the current situation and the development of a strategy to effectively contrast privatization trends and push forward alternatives that better respond to the people's need to protect, maintain and improve their (personal and collective) health.

The discussion went along collective strategies, keywords, building of convergences and ways to mobilize. The idea of a collective right to health emerged as part of the debate and was observed in its possible use as tool, while also the limits of this approach were pointed out and discussed to see how to use it as tool in the mid-term to catalyze a convergence of different instances and struggles.

Summarizing the two-day workshop we went along three levels, to see what points we had in common and on which there were different understandings and visions.

On the level of theory and understanding, participants agreed that:

Different opinions came up while discussing the role of the State, and related issues of sovereignty, redistribution trough public services, financing, controlling and guaranteeing the right to health(care).

A point highlighted as needing more discussion was the shift from an anthropocentric to a biocentric paradigm. Different opinions remained on the criteria and principles of public provision of healthcare as well as on alternative models of financing.

The organizational process to advance in our plans should imply: