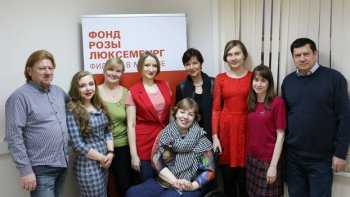 The countries that emerged from the Soviet Union are especially affected by social, economic and environmental destabilization and, accordingly, are looking for viable alternatives.

Our activities focus on the Russian Federation, where almost 30 million people officially live in poverty and the income gap continues to widen. The heavy fixation on exporting raw materials and resources prevents a fundamental economic and social transformation of society. The state’s restrictions on access to public space have reached dramatic proportions, particularly in small and medium-sized towns, while larger cities face new challenges brought about by immigration and labour migration. Society’s yearning for a new “national idea” is associated with the widespread perception that its foreign policy has been too heavily focused on the West and thus undermined the country’s international standing. Instead, many believe that the country ought to accelerate the development of its political, economic and military ties to leading non-Western countries such as China, India and Brazil.

Despite its limited successes, Russia’s NGO landscape remains fragmented and continues to spark social controversies. Against this backdrop, the RLS seeks to bring together a broad array of partners fighting for their causes in left-wing NGOs, at universities and in think tanks, willing to participate in decision-making processes at the local and communal levels and struggling to forge their own niches. In this way, the Rosa-Luxemburg-Stiftung helps to build a society based on solidarity, foster social justice and strengthen regional cooperation across the post-Soviet world.