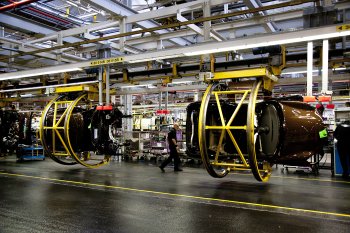 The Rosa-Luxemburg-Stiftung Brussels kindly invites you to this public conference!

Rising fuel prices, poor public transport services in rural areas, increasing financial pressure on middle and low-income households and the advancing climate crisis make it clear: we need a change of course in the transport sector. The European Commission's Green Deal envisages a 90 percent reduction of greenhouse gases in the transport sector by 2050. The additional challenge is to extract the raw materials and resources for the transformation of our economy in a way that respects the rights of workers and the affected population in the extraction areas and complies with environmental standards.

The international car industry, the transport sector in general and its employees are facing multiple challenges. The shift towards electric mobility, shared mobility, mobility platforms and autonomous driving are placing new demands on the skills profile of employees. In addition, the increasing digitalisation of production is also changing working conditions in companies. At the same time, the international car industry is repeatedly shaken by sales crises, despite extensive rescue packages put together in some parts of the world during the Corona pandemic.

But also the challenges of climate change, the traffic situation in our cities worldwide and the resources needed for the production of electric cars make it clear that the development of alternative production is necessary for the mobility turnaround, the strengthening of the circular economy and public services such as public transport. At the same time, the question is how to involve workers in this process and how to ensure that the alternative production of vehicles for public transport creates good work locally.

We invite trade unionists, scientists, climate activists and politicians from different regions of the world to discuss together:

Facilitator: Stephan Krull, Chair of Expert Round on Future, Car, Environment and Mobility (ZAUM) of Rosa-Luxemburg-Stiftung

We are looking forward to welcoming you at our conference.

In order to register, please send an e-mail to: manuela.kropp@rosalux.org