"The gender war is the main unifying subject of the global far right movements." Under this premise, a group of anti-fascists and feminists from all over Europe met, at the invitation of the Rosa Luxemburg Stiftung, in order to analyse the discourses of the extreme right and to strengthen partnerships against them. 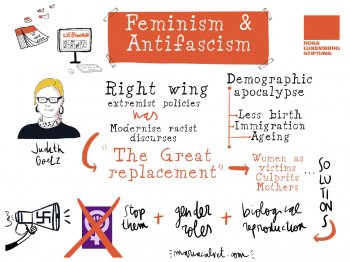 Right-wing extremist parties and neo-fascists are continuously gaining more influence in various countries world-wide. In fact, in some countries they have come to power, brandishing discourses critical of women's rights, attacking the LGBTQ community and promising anti-migrant policies. Racism and anti-feminism are two lines of argument adapted by the extreme right to the specific circumstances of each region. This was one of the subjects discussed during the meetings that the Rosa Luxemburg Stiftung organized, with activists from ten different European states, with the aim of achieving a common analysis and developing strategies in the face of what is called the "reactionary international”. This label comprises religious institutions, as well as groups belonging to the political-economic extreme right.

During two virtual meetings, taking place on consecutive days, more than 40 participants spent more than four hours talking to each other in a safe environment. What is happening in Ukraine might be very different from the Italian reality and what is going on in Russia cannot necessarily be transferred to the Croatian situation, but the meetings helped understand and learn about common stories. And as one of the speakers stated, it helped reaffirm that "transformative feminism can develop discursive counter-strategies and has the capability to mobilize people to confront the extreme right". These groups, "more often than attacking women's rights, as they know the women will respond forcefully, often assail the rights of migrants, as the latter are less organized”.

The presentations of Nuria Alabao, Judith Goetz and Laura Roth were the cornerstones of the online meetings. The first two spoke about concrete strategies of the extreme right, the third lecturer spoke about how to "feminize" social movements, an issue she addresses in her research “Feminise politics now!”. 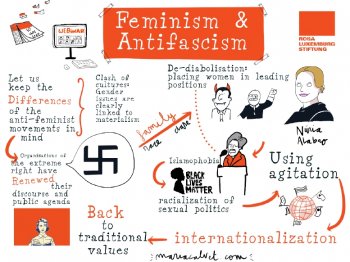 Nuria Alabao began her presentation discussing gender issues, "as material and not purely cultural," and the racialization of sexual politics. The journalist, who has a PhD in Social and Cultural Anthropology, states that the main novelty of the extreme right-wing parties, which began to re-emerge as a response to the movements of May 1968, is to portray immigrants as sex offenders. There are many examples of these unfounded accusations, but perhaps the most significant are the transpired events on New Year's Eve 2015 in Cologne. The objective of this false discourse is to link the material with the idea of insecurity: "They say that the material problems of society are caused by a crisis of values, and not by neoliberalism. They instrumentalize this insecurity to push for a return to traditional values, to the traditional heteronormative family that takes on care work." Alabao explains that increasingly precarious living conditions benefit the extreme right. Furthermore, she asserts that, in spite of the fact that racist policies have existed for a long time, "racist rhetoric had less space then, than it has today."

Alabao believes that there is an attempt to link race and gender and thus to influence the gender-specific division of labor, as well as the segmentation of the labor market, which, according to her, would benefit companies that profit from exploiting people.

According to Alabao, another novelty is the "internationalization of the gender war, turning it into the main unifying subject of the global far right movements". In her brief but pertinent intervention she recalls that the Pope was the first to talk about feminist expansion as part of a "cultural colonization" and that the Vatican also coined the term "gender ideology".

These discourses change somewhat from country to country, so that they are better accepted. Alabao, an anthropologist and a member of the “Fundación de los Comunes” as well as of several feminist groups, considers that the goal of the extreme right is "to stir up the bases with radical discourses.” She adds: "They play at creating a political and cultural base for themselves, but they don't necessarily want to win, they just want to create turmoil through a war of values.” In fact, some of their mantras, for instance their hatred of the LGBTQ* community or their pro-life discourses, are becoming less acceptable all around the world: “They don't go for the majority of the voters, they want to cause agitation, they want to stir up established consensus.” 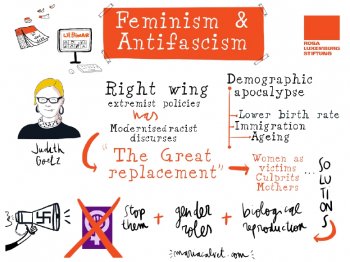 The Austrian professor of the Vienna University, Judith Goetz, focused on the concept of a 'great replacement', linked to demographic development and the falling birth rate of the 'native population'. "In their narrative of demographic change, they use a racist discourse to affirm that the native population will be replaced by the Muslim population, which supposedly intends to islamize Europe". In this imagined scenario, women have various roles: they should have more children, they are victims, in danger of being raped by immigrants, whilst also being culprits, as they claim women's votes are often too progressive. "Population policies are used to introduce racist ideas," adds Goetz, who also spoke of an identitarian #MeToo.

As the Rosa Luxemburg Foundation explains in their invitation to the webinar, the idea of the 'great replacement' allegedly apolitically, refers to "nature", "normal families" or "demography", and "openly invokes nature to legitimize racist, colonial or classist structures". 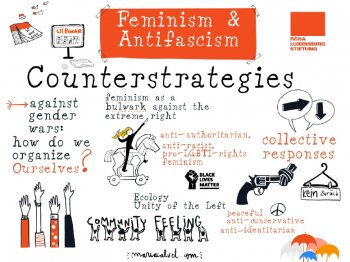 Should we engage in discussions with the extreme right? Should we re-discuss issues where common consensus has already been established, such as the law on gender violence in Spain? There is no easy answer and there is room for many nuances. Nuria Alabao argues that "if polarizing discourses get space in the media, we need to respond", although "we need to clearly reject their agendas and our fight must be directed against the axes of exploitation (race, class, gender and ecology), generating a broad alliance".

We need common responses. Two concrete examples: recently, in Brazil and in Poland, the largest opposition movements to the current governments are feminists – representing a pluralistic feminism, as emphasized by the panellists and the organizers. Another prominent example is the “Black Lives Matter” movement in the United States, which unites the African American population and white and Latino activists. This unity "cuts short the ethnic confrontation that fascism and nationalism seek to produce and stops the blaming of migration for all problems," notes Nuria Alabao, who strongly asserts that "the enemy is the economic system”. Hence the importance, according to the anthropologist, of close-knit neighborhoods and collective responses in the face of the fear stirred up by the far right.

“The Austrian grandmothers against the extreme right” are another successful example mentioned during the meeting. They are an example for the politicization of women. "I believe our hearts beat strongly when we are together. Only united can we resist and fight fascism around the world," Monika Salzer, one of the “Omas Gegen Rechts”, told Pikara Magazine.